Outgoing magistrates and judge recognized for years of service 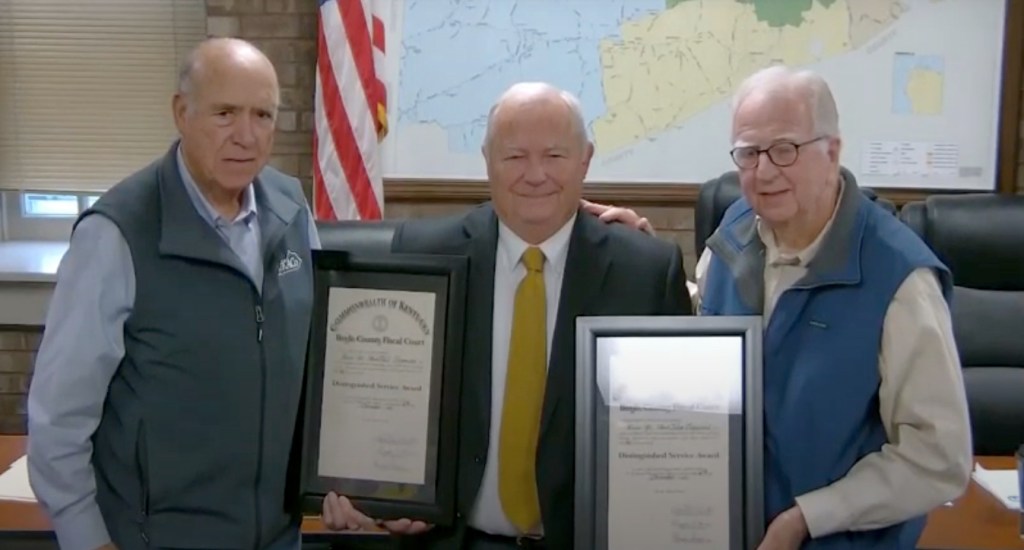 The Fiscal Court recognized several outgoing members at their meeting on Dec. 6.

Judge Executive Howard Hunt presented Magistrates Phil Sammons and John Caywood with distinguished service awards for dedicating much of their lives to the fiscal court. Sammons served about 24 years on the court, and Caywood served about 21 years.

“What they have done with this court has been a tremendous, uplifting and empowering advancement of intellect and connectivity with the public, and putting forth a lot of time and dedication to serving their constituents,” Hunt said.

He continued, “I look at John as a little bit of a voice of reason, and Phil as a voice of experience, and his commitment has shown through of being elected president of KACo, Kentucky Association of Counties, and completed that term successfully and did a lot of great things there including awarding scholarships to people in Boyle County.”

Hunt read a certificate on the back of the awards stating what the court accomplished in the 2019 to 2022 term. Some things they achieved are they secured funding of $1.1 million for the first-ever sewer system at Glenn Island Road; created the public forums called ‘Pulse of the People;’ created the Birthplace of Kentucky committee to service Constitution Square Park; secured funding and completion of a new Perryville bridge upgrade; collected 20-plus years of previously uncollected revenue resulting in over $600,000 in new money; funded new support for school resource officers; secured and installed dash body cameras for all Boyle County sheriff road officers, and other things.

“Phil and I didn’t do this by ourselves, we did this with everyone in this room and others,” Caywood said. “You achieve success by working together, and I think that’s what we did. We agreed most of the time, but we had enough in us that if we didn’t, we felt comfortable in saying what we felt.”

Hunt is also not returning to office after being outvoted in the recent election. Magistrate Tom Ellis presented a resolution honoring Hunt for his service as judge executive over the last four years.

Part of the resolution states, “… Whereas Judge Hunt has always conducted our Boyle County Fiscal Court with a philosophy of cooperation and collaboration among all elected magistrates, and whereas public input has been a keyword of Judge Hunt throughout countless countywide Pulse of the People community forums…”

“We the collective Fiscal Court magistrates pay tribute to our Boyle County Judge Executive Howard B. Hunt, our colleague and friend, for his leadership, vision, support and professionalism throughout his term of office.”

Hunt thanked the court, saying it was a touching tribute.