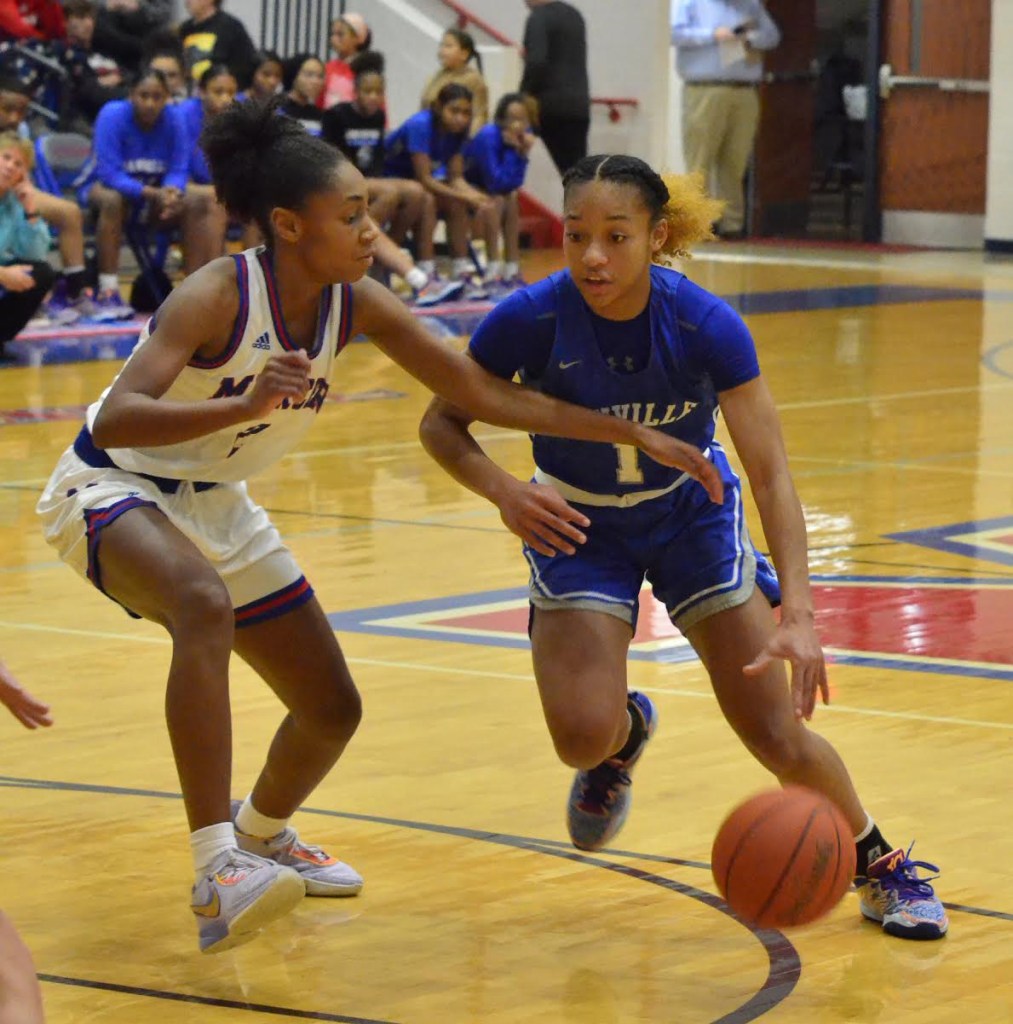 Love Mays, right, of Danville drives into the lane against Mercer County’s Teigh Yeast during the first quarter Tuesday. Photo by Mike Marsee

HARRODSBURG — It isn’t a rebuild for either team, but two of the best girls basketball programs in the 12th Region are most certainly under construction.

The Danville and Mercer County girls look vastly different than they did last spring, when Mercer made the regional final and Danville was in the semifinals, even though they have many of the same players who helped them reach those heights.

When they crossed paths Tuesday night, Danville did just enough things right to eke out a 49-48 victory.

Visiting Danville made mistakes and forced mistakes in a back-and-forth game before Love Mays’ layup with 19 seconds left lifted the Lady Admirals over the team that eliminated them in last year’s regional.

Danville (3-1) is a much younger team after losing three starting guards to graduation, and Mason said it’s going to take some time to put the pieces together.

“It’s a process,” she said. “If we were perfect right now guarding the pick and roll, then at tournament time there wouldn’t be anything to work on.”

There is plenty to work on for Mercer (2-5) as well. The Titans returned virtually their entire roster, but everything changed when Timberlynn Yeast, a 2,000-point scorer who was expected to be a Miss Basketball candidate, was lost to a knee injury days before the season began.

Now Mercer coach Hayley Spivey is asking the team’s other veteran players to do different things in Yeast’s absence, and she knows that will take some time as well.

“She’s a special player, and she’s one of the top players in the state of Kentucky. I don’t need one person to replace her; it has to be done by committee,” Spivey said. “It’s a learning curve, and some people are going to have to play a different role than they were anticipating.”

The intersection of the two teams made for a compelling game that featured nine lead changes, including five in the fourth quarter. Neither team led by more than seven points at any time or by more than three in the final period.

Mercer took a 48-47 lead with 26 seconds left on two free throws by Teigh Yeast but couldn’t score again after Mays scored on the other end.

A steal by Danville’s Myla Turner gave the Lady Admirals the ball back, and Turner rebounded a missed free throw at :07 to seal their win.

Turner and fellow sophomores Jazelynn Doneghy and Nemaeh Jackson have moved into the rotation this season, and Mason said all made big plays late in the game.

“They came through at the end,” she said.

There were three sophomores and a freshman on the floor at one point when Mays was in foul trouble.

The younger players are blending with returning starters Mays and Desiree Tandy and fellow seniors Samantha Bottom and Bryn Gooch, who have moved from the bench into the starting five.

Mason said because she has fewer experienced players than the Lady Admirals have had in recent seasons, she’s had to make some adjustments, too.

“I’ve got to be positive with them and tell them the good things instead of just telling them the bad things all the time, so it’s a process for me, too,” she said.

Mays had 20 points, Bottom had 10 points and Tandy had 14 rebounds for Danville, which has won three straight games since a season-opening loss to Pulaski County.

Mercer, which hosted Burgin on Thursday night, has had less success, but all five of the Titans’ defeats have come by 10 points or less. There were three-point losses to Mercy and Somerset, as well as losses to two strong teams from Parkersburg, W.Va.

“We’re right there,” Spivey said. “We’ve just got to be able to turn the corner and finish out games, and right now that’s going to come with our offense. We’re going to have to be able to put the ball in the basket.”

Anna Drakeford scored 26 points for Mercer, including 15 in the second half, but no one else had more than two field goals and eight points.