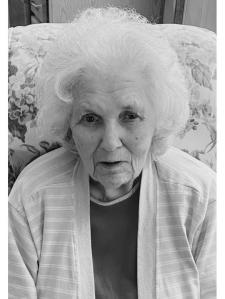 Doris Elizabeth Oliver Brenda Irvine, age 93, of Danville formerly of Broughtontown, passed away on Friday, December 16, 2022, at her daughter’s residence. Born on Saturday, September 14, 1929, in Rabbit Hash, in Boone County, Kentucky, she was the daughter of the late Richard and Edith Green Oliver. Doris was married to the late Otto Brenda, a Veteran of World War II, from August 20,1947, until April 30, 1969, and then to the late John Irvine, a Veteran of World War II, from October 18, 1974, until February 11, 1997.

Doris was a long-time member of Friendship Baptist Church until she moved in 2000. She taught Sunday School and VBS for many years at Friendship Baptist Church. She was a member of Calvary Hill Baptist Church. She loved God, Country and People. She loved her children, grandchildren, and great grandchildren. She loved gospel singing, quilting, her flowers, garden, fishing, and the beach. She had many shells that she had picked up over the years. She was always amazed at how good God was. She was one of the founders of the Broughtontown Community Center.

In addition to her parents, and Husbands, she was preceded in death by her sisters, Lillian Zwalhen and Barbara Siler; brothers, Raymond, Lester, Hugh, Malcom, George, and Clp. James Oliver and stepdaughter, Judy Dickey.

A Public Funeral Service will be held at 2:00 on Wednesday, December 21, 2022, at Fox & Friend Funeral Home. Bro. Darrell Gentry will officiate the service.