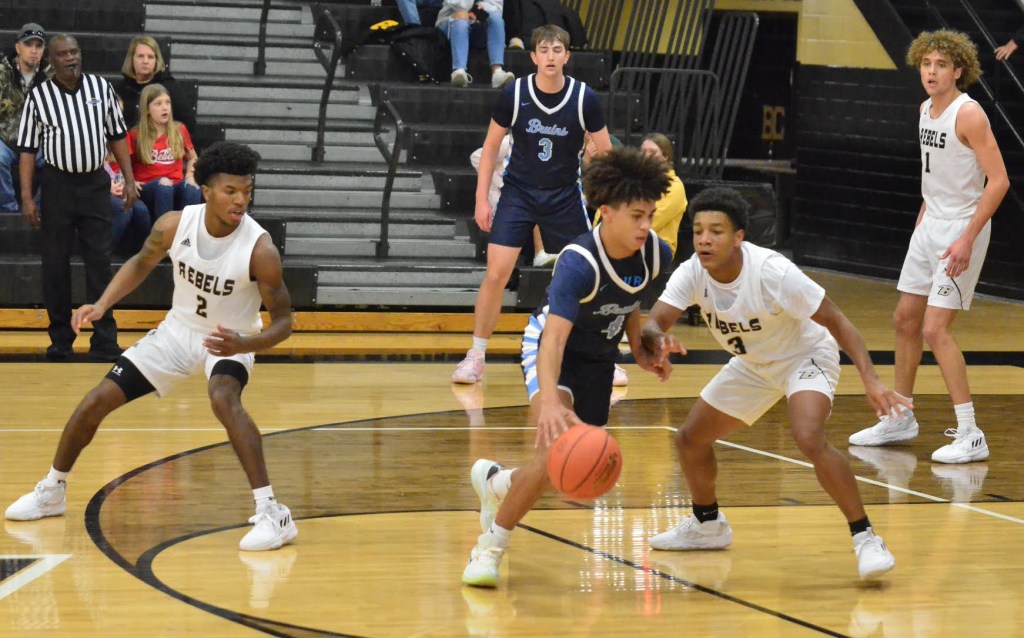 There was no question the Boyle County boys were going to have a different look this year, and it remains to be seen exactly what they’ll look like.

The Rebels started behind every other team in the 12th Region because most of their players were still on the football field when the basketball season opened, so it’s going to take some time for them to find out who they are.

The early returns indicate, however, that they will be a deeper, faster, more aggressive team, and the players believe their ceiling is high.

Ten of the 16 players on Boyle’s varsity basketball roster were also on the football team that won the Class 4A championship Dec. 2. They were all with the basketball team a week later, and the Rebels have won three of four games with their roster intact.

Boyle (3-4) fought off Central Hardin for a 73-72 victory Friday night, then saw their winning streak end some 24 hours later with a 76-68 loss at Highlands.

Coach Dennie Webb said the Rebels still have much to improve on, particularly on offense, but he likes some of what he has seen so far.

“We’re playing hard, we’re playing good defense. That’ll help us tremendously,” Webb said. “I hope we play that hard every night. We’ve got a lot of kids that are hard-nosed and they like to get after it, and it’s fun to watch when they’re having fun doing it.”

Tarter and his football teammates had plenty of fun during their championship season, but he said he’s glad to be back in the gym.

“It’s nice to get back and have the football players back on the team,” Tarter said. “I love getting after it with my boys.”

The Rebels lost five players from last season’s team that went 23-8 and reached the regional semifinals, including four of their top six scorers. But their rotation includes as many as 12 players, including two eighth-graders, and they’re taking advantage of their depth to pressure opponents more than in recent seasons.

“We love it,” Tarter said. “We’re trying to press a lot, just move a lot of bodies in and out. We’ve got five or six subs that are ready to come in at all times.”

Webb likes it, too, and he likes Boyle’s depth as well.

“We’ve got some depth at all positions, so I think we’re probably going to press as much as we can, keep everybody fresh and hopefully wear some teams down later in the season,” he said.

What he doesn’t like is the Rebels’ erratic offense. He said the team has had only four full practices since the football players came out, and he said that’s evident on offense.

“We’re still pretty limited on what we know offensively. We don’t have everything in that we want to do,” Webb said. “It’s just not clicking yet, but we’ll get there.”

Even so, Boyle is averaging 71.3 points in its last four games, up from 57.5 per game last year. The Rebels are pushing the pace behind point guard Montavin Quisenberry, a sophomore who ran the offense at Garrard County last season and starred for Boyle on the football field this season. Quisenberry had 27 points Friday in their win over Central Hardin.

“He’s more of a true point guard than what we’ve had,” Webb said. “We’ve had great guard play the whole time I’ve been here, but we’ve kind of done it by committee.”

Boyle also has other capable ball-handlers, including junior Sage Dawson, another football player who has returned to the basketball court after sitting out last season, and eighth-grader Guy Turner.

And the Rebels figure to be a strong rebounding team behind Tarter, who had 17 rebounds along with 18 points Friday and is averaging 10 boards per game, Avery Bodner and Dawson.

“We always like to go up and get it,” Tarter said.

Boyle opens 45th District play Tuesday against Danville Christian, and the Rebels will take advantage of extra practice time during the Christmas break to improve.

Webb said he doesn’t mind a longer learning curve at the start of the season if it means having players who are part of a winning culture.

“That’s still good for us because they’re winners,” he said.