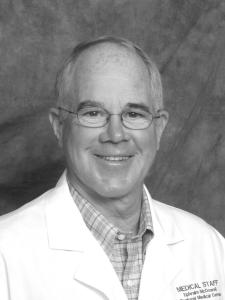 Dr. Joseph “Jay” Lanier Lukins, 79, of Danville died Saturday, December 17, 2022. Jay was born in Louisville, KY on September 7, 1943, the son of the late Joseph Lanier and Katherine Holcomb Lukins. He was the eldest of five children. He graduated from Atherton High School in 1961 and from Duke University in 1965 where he was a member of Phi Delta Theta. He graduated from the University of Kentucky Medical School in 1969 and was inducted into the medical society Alpha Omega Alpha. He completed his residency in orthopaedics at the University of Utah in Salt Lake City before serving in the U.S. Army at Fort Campbell, KY as an orthopaedist, attaining the rank of major in 1976. Jay began his private practice in Danville, KY, joining the office of Dr. Mack Jackson. After one year, he opened a solo practice that steadily grew and is now known as Danville Orthopaedics and Sports Medicine. In the beginning, he did general orthopaedics but eventually had a special interest in major joint reconstruction. At Ephraim McDowell Regional Medical Center, Jay served on multiple committees through the years and on the Board as secretary and vice president. He was known for his fairness and ability to work with others as chairman of the Bylaws committee from 1999 until his retirement in 2016 where he helped to enhance the quality of patient care and improve the self-governance of the medical staff. Jay loved orthopaedics and especially enjoyed the personal relationships with office and hospital staff as well as with his patients. The successful immediate outcome when helping patients was rewarding for him.
For many years, Jay and his family lived on ‘Golden Run Farm’ in Danville, named for the beloved golden retrievers that the family raised there. He always enjoyed welcoming his extended family and friends into his home. Jay enjoyed the outdoors and all the sports and activities that it provided including hunting, fishing, tennis, golf, sailing, water skiing, snow skiing, and especially UK sports. He loved a good competition and would be the first to promote a game of volleyball on the beach or a lively game of charades. Jay partnered in ownership of a cabin in Forkland where he could ‘get away’ and enjoy the woods and camaraderie with family and friends. Bike trips to Europe provided special memories for him as well.
Jay is predeceased by a brother William Joshua Lukins and is survived by his partner Maripat Biles, her son Hunter Baltazar, and his children Josh Lukins (Ileana Contreras) and Katie Lukins and his sisters Jean Kittner, Mary O’Neill, Ann (David) Black, and a large extended family and friends.
A memorial service will be held at 1 p.m., Wednesday, December 28, 2022, at First Christian Church, Danville, Kentucky. The family will receive friends following the service.
In lieu of flowers the family requests that remembrances be made in the form of donations to your favorite charity or the University of Kentucky College of Medicine, P.O. Box 34184, Lexington, Kentucky 40588 or the First Christian Church, 555 East Lexington Ave., Danville Kentucky in honor of Jay Lukins. An online guestbook is available at www.stithcares.com.