DCA boys take another step with first win over Boyle 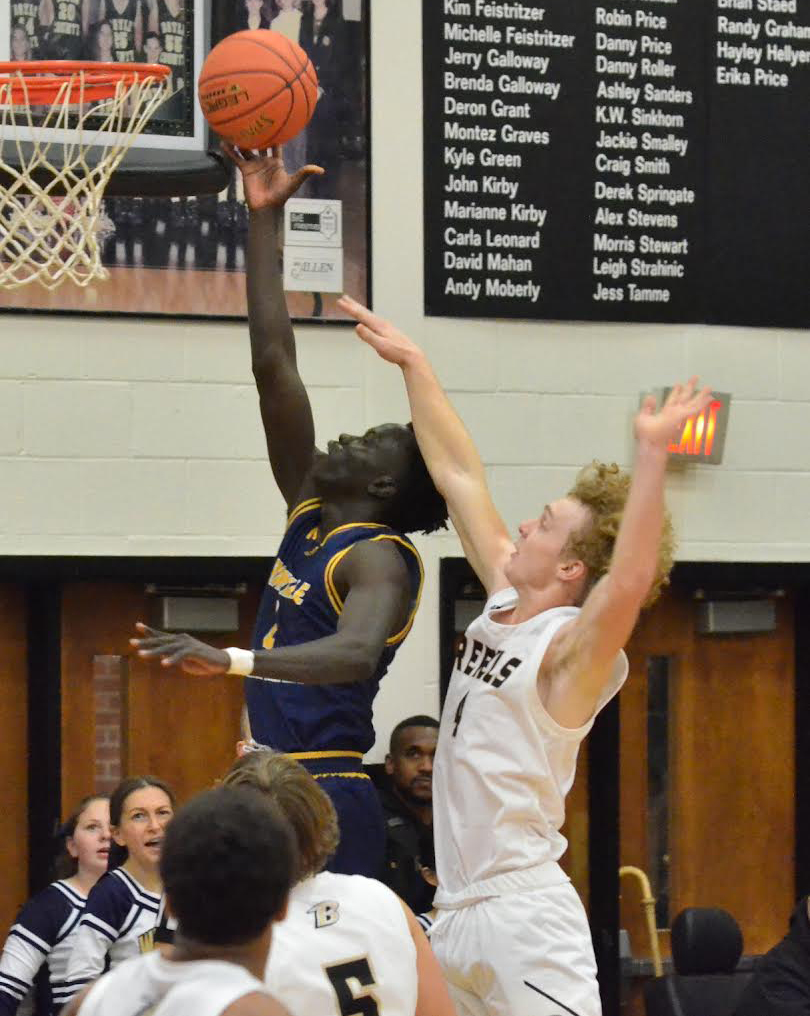 Emmanuel Dut, left, of Danville Christian gets past Boyle County’s Avery Bodner for a layup during the fourth quarter Tuesday. Photo by Mike Marsee

A few years ago, this result would have been unthinkable. A couple of years ago, it was unattainable. Even last season, still unlikely.

But the Danville Christian boys’ first victory over Boyle County now stands as an unmistakable indicator of how the program has progressed and how it might continue to do so this season.

The Warriors reached another rung in their ascent in the 45th District on Tuesday night by scoring the final 11 points of the game to defeat Boyle 61-50 at Rebel Arena.

It is only one early-season win, but it is another significant win for a program that has had a series of them over the past two seasons.

“It’s one that we’ve been wanting for a while,” DCA forward Grayson Domidion said. “We planned for this one.”

It was clearly a win worth celebrating for DCA (6-2, 1-1 district) and its fans, many of whom stayed around for some time after the game to congratulate the players.

“This is a good moment for us,” DCA coach Don Story said. “Going forward, we’re wanting a lot of these … but with the program where we’re at, we look at the milestones and try to climb that ladder.

“We respect Boyle County’s program, obviously — they’ve had one of the best programs in the region for a long time — and this is a big win for us.”

The Warriors defeated 45th District opponents last season for the first time since beginning KHSAA play in 2018, and they showed traits Tuesday that could make them even more of a factor in the district race this season.

For starters, DCA displayed a level of depth it didn’t have last season. That was critical in the second quarter, when foul trouble sent the Warriors deep into their bench.

After a first quarter that featured five lead changes, DCA opened a five-point lead in the second period and remained on top at halftime. Story said he was forced to go one or two players deeper into the bench than usual, but he couldn’t have been happier with the results.

“It was a good effort, and especially from our six, seven, eight, nine guys. In the second quarter they had to come in and play a lot of minutes,” he said.

He said that wouldn’t have gone nearly as well a few years ago.

“I think it was three years ago we came over here, and basically a lot of those guys that were in in the second quarter played against (Boyle). We were just a mismatch, and it was obvious,” Story said. “But to see those guys grow up and be able to compete against Boyle County was pretty pleasing to me.”

Domidion led the DCA reserves with eight points and seven rebounds at halftime, and he finished with 13 points and 10 boards.

“I thought our bench did outstanding, coming in and realizing we were just as strong as them, we had no reason to be scared or running from people,” he said.

Domidion and his teammates have done some growing up, but they have also benefitted from the weight room installed earlier this year at the school.

“In the years past we’ve been smaller and we never had a weight room. Having a weight room now changes the game. It changes how we’re stronger with the ball, changes the way we get rebounds,” Domidion said.

Shot selection was also important for the Warriors, who had 16 fewer attempts than the Rebels.

“You’re not going to win many games doing that,” Boyle coach Dennie Webbb said. “Our boys played their tails off. You get some of those shots to fall and momentum goes your way, and when they don’t fall it puts that much more pressure on your defense.”

The Rebels had only one field goal in the final 5 1/2 minutes, a layup by Avery Bodner that tied the game at 50-all with 4:12 to play. They never scored again, and DCA got to the basket for four layups during its game-ending run.

Emmanuel Dut, a junior and a newcomer to the team who has paced the Warriors in scoring this season, had five points in the final four minutes and finished with a team-high 17 points on 8-of-12 shooting.

Titus Boyd added four points for the Warriors, and he had eight in the fourth quarter.

Jakei Tarter led Boyle with 17 points and 11 rebounds, and Bodner added nine points. Eleven players had rebounds for the Rebels, who outrebounded DCA 51-42 and had 25 offensive boards.

DCA lost its 45th District opener to Garrard County by four points last week, and that game and this one — the only two district games played to date — indicate that any and every district game could be hotly contested when the schedule resumes in early January and Lincoln County and Danville join the fray.