City thanks outgoing mayor for years of service 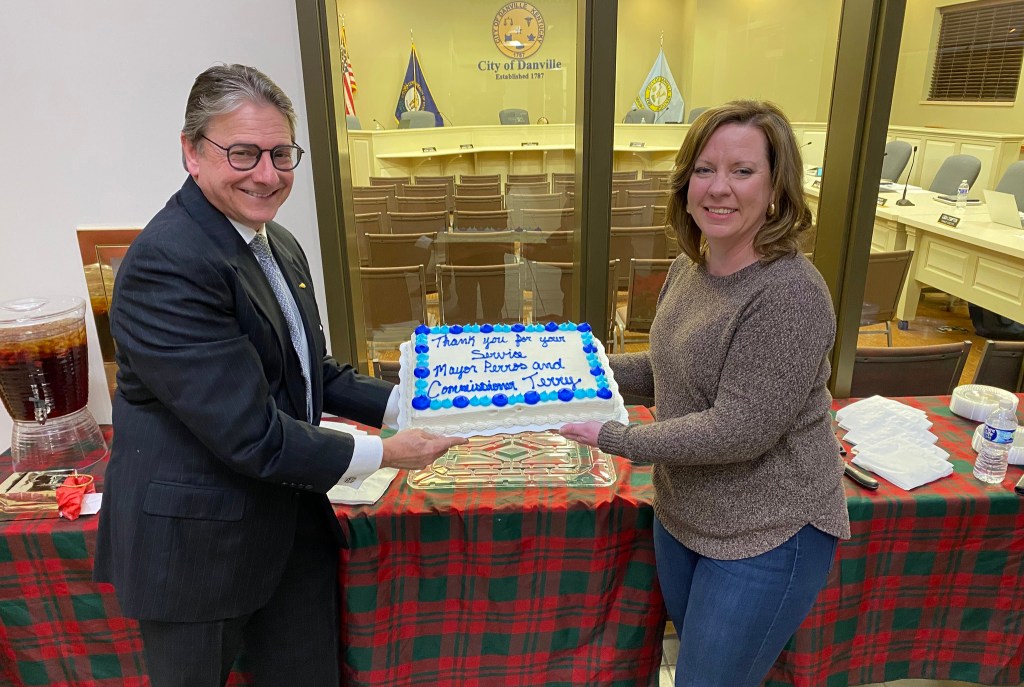 Outgoing Mayor Mike Perros (left) and Commissioner Denise Terry (right) were recognized for their service at the commission meeting, with a reception afterward. Photo courtesy of City of Danville Facebook page.

Outgoing Danville Mayor Mike Perros and Commissioner Denise Terry were recognized for eight years of service at the city commission meeting on Dec. 19.

Incoming Mayor James Atkins presented Mike Perros with a clock to honor his time as mayor from 2015 to 2022.

“We want to thank you very sincerely, and not only have you been the mayor, but you’ve also sort of been the magnet, you’ve helped hold all the rest of us together … and give us guidance,” Atkins said.

Mike’s daughters, Michaelle and Haley Perros, were at the meeting and spoke about their father’s tenure. Haley said Mike was always involved in the community, serving on several boards and commissions, and always making his opinions known.

She said, “I remember we would joke and say, ‘dad, why don’t you run for mayor? You try to run the town anyway, you might as well,’ and he would say ‘I want nothing to do with that.’”

“I have loved watching you do what you do for Danville,” Haley said. “There have been a myriad of praise and complaints and everything from good to bad and in between, there may be trees gone and a fountain change … those things can always come back and grow, but the things you have done for this community are the ones that are long-lasting, they’re permanent, and they’re beautiful.”

Mike said the biggest reason he became mayor was for his daughters, wanting to leave the community a little better for them. He also thanked the commission and staff for the hard work they continue to do.

“What you don’t see is what [city staff] do,” Mike said. “We sit up here and say ‘XYZ,’ these people take ‘XYZ’ and put it in motion, and they do it with a great deal of expertise, and a great deal of grace.”

Mike listed some things the city accomplished over 2015 to 2022. Some things he’s most proud of being a part of are the streetscape and parks projects, creating the Economic Development Authority, and the fact that during that time, the police department increased from 34 to 40 officers. They created a newsletter, reorganized Parks and Recreation, had a Parks and Recreation master plan, a downtown master plan, annexed the airport, had a cemetery expansion, a new Central Fire Station, and other things.

“I had four points when I ran: one was jobs, two was to face crime and drugs in the face, three was to underscore the city manager form of government, and four was to work with the county,” Mike said. “I think we have successfully reorganized the economic development efforts, and that translates into jobs, and jobs is what fuels the whole thing.”

Mike also wanted to highlight ongoing challenges. He said the city needs an active grant writer; needs to work on getting more information out to the public; needs a roundabout at Walnut and Stanford; needs economic development incentives with respect to housing; to tackle homelessness; and to continue discussions on creating an East Danville bypass.

He said they should utilize the local airport to help the region, as well as Kentucky School for the Deaf property.

“That’s a large property in the middle of Danville that’s not being fully utilized like it could be,” Mike said.

Atkins thanked him for the directives.

Commissioner Terry talked about how when they both were elected, she wanted to forge a relationship with Mike, good or bad. After a rocky start, they spent countless hours on the phone over those eight years.

Terry also received an award honoring her service as commissioner from 2015 to 2022.

Atkins said she’s an example of what citizens who desire to serve on the commission do. Several years before running, she came to meetings and started asking questions to the political leaders.

“I think I’m probably an example that anyone can run for office; I was a single mom and a business owner,” Terry said. “I was living and had a business downtown and every decision made affected me, and I started coming to meetings.”

City Attorney Stephen Dexter and others thanked her for her service.

“You’re a hard worker, you’re diligent in your pursuit, you’re going to come prepared and you always were, and that’s of great value to the citizens,” Dexter said.

Terry thanked her family for being supportive of her, and the sacrifices they made for her to serve on the commission.