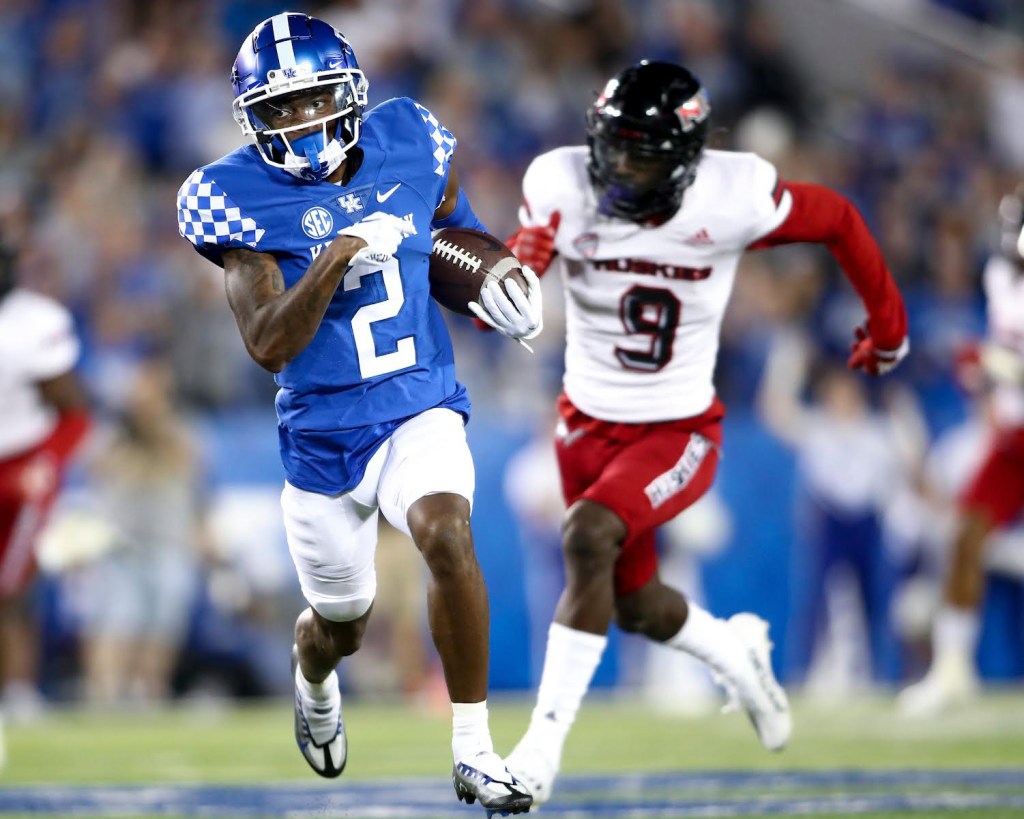 One Kentucky player who certainly is not disappointed the Wildcats are playing Iowa in the Music City Bowl Saturday is freshman receiver Barion Brown, a Nashville native.

He says he’ll have a lot of friends and family at the game and cannot wait to play in front of them in his hometown along with Nashville high school football standouts who might also want to come play for UK.

“Letting them see how hard we have worked for this will be great,” said Brown. “Great school, great environment, great coach. You come here ready to work.”

Brown certainly worked well for Kentucky. He had 45 catches for 604 yards – 13.4 yards per reception – and four touchdowns. He returned a kickoff 100 yards for a score and averaged 28 yards per return. Brown proved he was one of the best  young receivers not just in the SEC but in the country.

“God put me in this position. I always could be better and will always push to be the best I can be,” he said. “I feel I left a lot on the field and can be better (next season).”

Top-ranked Georgia saw plenty of what he can do already when he had 10 catches for a UK-high 145 yards and a touchdown. He was named to the all-SEC freshman team and third-team all-SEC pick.

He says he can still pick up defenses quicker and he continues to adjust to the speed of SEC football. He’s confident more reps/experience will take care of that in 2023.

“Picking up the speed of the game and knowledge of the game will help me a lot. Just knowing the coverages and defender’s tendencies by watching more film,” he said.

Brown said the offensive remains “kind of the same” even without Levis playing.

“We won’t put in too much new. It is hard to change the playbook a lot at this time of year,” the freshman said. “I wish they were playing but our goal is to win the bowl. We are still practicing hard, watching film.”

“They are great quarterbacks, always have been,” Brown said. “I can’t wait to play with them. I love my guys.”

He knows Wade would be thrilled to have a chance to play in his hometown, too.

“It would be great. I can’t wait to see my boy,” Brown said.

He said the Cats have to continue to “focus” on what lies ahead.

“We got to go out and put on a show. Just block out the negativity and work hard to win,” he said. “This game is in Nashville, my hometown. I just can’t wait to play.”

Florida A&M coach Robert McCullum watched UK freshman guard Cason Wallace score a career-high 27 points and dish out nine assists in a 20-point win over his team but was most impressed that he was a “two-way player” for the Cats.

“To find a young player — a freshman — that plays that way on both ends is really impressive. Normally, for young players, it takes a while to get them to buy in on defense, but he plays on both ends,” McCullum said.

“He can hurt you in so many ways offensively. He can get to the basket, he can get his shot off the dribble, and he can catch and shoot. Then you look at his size. Small guards are going to have a lot of difficulty trying to guard him.”

Wallace hit five 3-pointers against Florida A&M but he also had four steals to demonstrate his two-way ability.

Wallace said he actually went into the game with a “different mindset” to get to the basket more instead of shooting 3-pointers that led him to being more aggressive.

“The 3s had started falling so I kind of fell in love with it but getting back to that old feel and getting open shots (felt good),” Wallace said after the Florida A&M win.

Wallace was one of 10 freshmen ESPN’s Jeff Borzello singled out as the “Best of the Best” rookies this year in college hoops.

“He doesn’t have the big numbers of some of the other freshmen on this list, but Wallace has been one of the best two-way first-year players in the country — and more prolific outings appear to be coming,” Borzello wrote.  “Observers have been calling for John Calipari to give Wallace more freedom.”

UK gets its QB

Kentucky got the quarterback it wanted in the transfer portal for expected new offensive coordinator Liam Coen when North Carolina State’s Devin Leary picked UK over a bevy of other offers.

“I mean anybody and everybody that was in the quarterback market, was after him. We really feel like we hit a home run with him,” Stoops said.  “Again, I told you, I feel confident with the quarterbacks that we have on campus, but this gives you a one-year transfer free agent, if you will, to come in for a year and really bridge that gap, let our guys continue to grow.

One interesting tidbit: Leary writes left-handed but is a right-handed passer because he used his brother’s  baseball glove as a kid that went on his left hand and forced him to throw with his right arm.