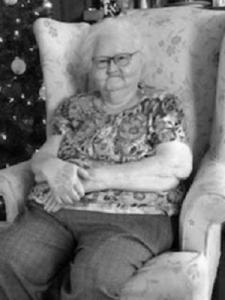 Edith Bowling Hoskins died on December 28, 2022, at the age of 92, at the Danville Centre for Health and Rehabilitation. She was born in Stanford, KY on December 12, 1930, to the late John William Bowling and the late Alva P. Ledford Bowling. She is the granddaughter of the late Jesse Bowling and the late Eliza Cloyd Bowling and the late Andrew Hamilton Ledford and the late Mary Susan “Polly” Parsons Ledford. Edith is the widow of Howard Hoskins who died in 2002 after nearly 55 years of marriage. She is preceded in death by her parents and sister, Dorothy Bowling.
She is survived by five children, Jerry Hoskins (Gail) of Columbus, OH, Karen Smith (George Riley) and Debbie Kuhn (Richard), both of Danville, KY; Keith Hoskins (Sharon) of Richmond and John Hoskins (Teresa) of Stanford; fifteen grandchildren, Jason Hoskins, Lisa Garber, Kevin Hoskins, Tonya Saylor, Bryan Smith, Michelle Shorter, Ashley Rhodus, Kim Hoskins, Jeremy Renner, Josh Renner, Brandon Renner, Tyler Carmickle, Leslie Staton, Kristina Tarter and Matthew Hoskins; one brother, Jesse Andrew Bowling (Freda) of Versailles, KY; and several nieces and nephews.
Edith lived her entire life in Lincoln County, she attended school in Crab Orchard. She then married Howard after WWII and his return from overseas. They were lifetime beef and tobacco farmers, and she was also a homemaker. She had a great memory and always enjoyed telling detailed stories of her family and life. She enjoyed car rides in the country, spending time with her children, seeing her friends at church, making trips to places like Renfro Valley and special church events with any of her children.
After Howard’s death she continued to live at her home in Walnut Flat and later under the care of her daughter’s Debbie and Karen, until she needed nursing home care 11/2 years ago. She attended Hebron Lakeside Church (previously Hebron Methodist) her entire life and was baptized in Cedar Creek. She will be greatly missed by those who love her.
Visitation will be on Monday, January 2, 2022 from 5:00 p.m. to 8:00 p.m. at Spurlin Funeral Home in Stanford, KY. The funeral service will be held on Tuesday, January 3, 2022 at 1:00 p.m. with Rev. Robert Camenisch officiating. Burial will follow at Buffalo Springs Cemetery.
Active Pallbearers will be grandsons. Honorary Pallbearers will be granddaughters.