Cats win a close one vs. LSU 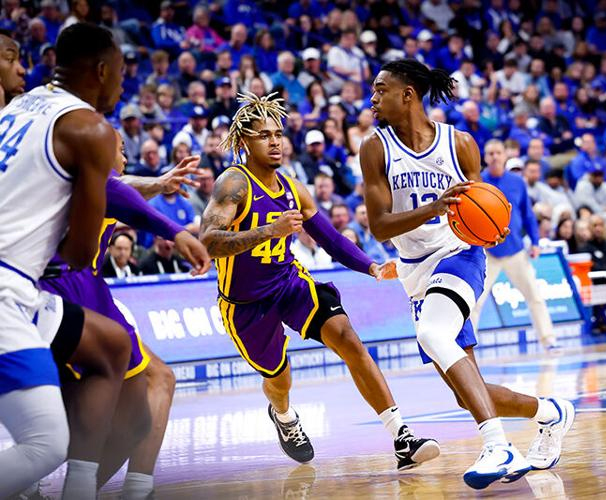 Kentucky’s Antonio Reeves (12) looks to pass the ball in a 74-71 win Tuesday vs. LSU. Kentucky Today photo by Les Nicholson

It wasn’t perfect, but Kentucky survived a close call with a 74-71 triumph over LSU Tuesday night.

“We’re getting closer,” Kentucky coach John Calipari said. “We’ve got stuff to figure out, but you know what’s great about it? It’s all fixable — how we finish off (games), what we do, how we play with nine, eight seconds on the clock, who should have the ball at that point … it’s all fixable.”

The Wildcats (10-4, 1-1 Southeastern Conference) handed the Tigers (12-2, 1-1) just their second behind another stellar performance by senior forward Jacob Toppin. Coming off a career-high 24 point outing in an 86-63 rout of rival Louisville Saturday, Toppin provided the late-game heroics for the Wildcats, scoring 17 of his 21 points in the second half.

Toppin drained a clutch 3-pointer from the left corner after the Tigers pulled to within 67-66 with less than two minutes remaining. The senior forward repeated the dagger with 3.4 seconds remaining when he drilled a pair of free throws for the final margin.

“Jacob making a three, making free throws, (it was) a big deal,” Calipari said. “Think about where he was three games ago, five games ago.”

The clutch plays, Toppin said, comes from the belief in his teammates and his coaches. He also credited a changed mindset prior to the Christmas break.

“They believe I can make (those) shots,” he said. “It’s all a mentality (and having the right mindset) in every aspect.”

Kentucky had a pair of scoreless stretches in the second half, including one that went for more than four minutes after the Wildcats had built a 10-point lead. However, a slam by Toppin provided Kentucky the spark it needed to overcome the gritty Tigers. Toppin scored 11 of the team’s final 13 points.

“It was a heck of a basketball game,” LSU coach Matt McMahon said. “Both teams were probably better offensively than expected going (into the game). Give them credit for finding ways to win. They hit some tough shots late.”

To go along with Toppin, four of Kentucky’s five starters finished in double figures as Calipari went with a seven-man rotation. Oscar Tshiebwe had a double-double with 19 points and 16 rebounds, followed by Cason Wallace with 14 points. Sahvir Wheeler just missed a double-double of his own with 11 points and nine assists. Wheeler made three of the team’s seven 3-pointers, including a key banked-in trey with four minutes remaining.

Despite Kentucky’s struggles in close games, Calipari felt good about his team’s chances prior to tipoff.

“I knew it wasn’t going to be easy,” he said. “But, we are getting away from the clutter and everything else, let’s just play and coach our team. That is a really good team. … we’ve got to be in the events to figure out what we’ve got to do.”

They moved one step closer against the Tigers.