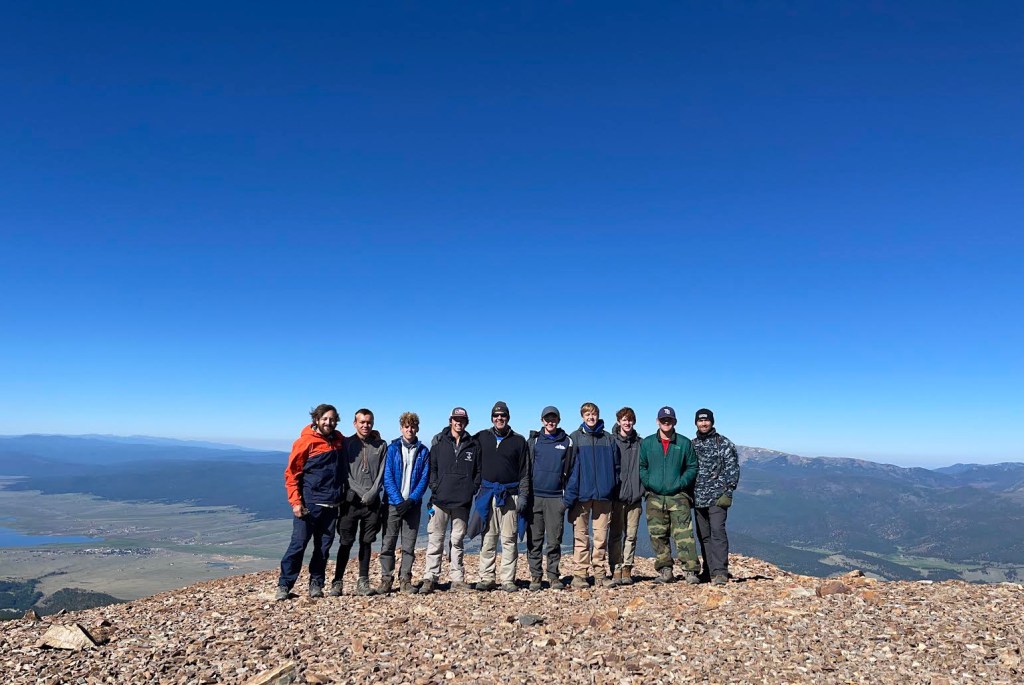 A highlight of the scouts’ trip was summitting Mount Baldy. Photo submitted

Beneath the Tooth of Time protrusion, along the Sangre de Cristo Mountains, a group of seven local scouts surveys their gear one last time. Within hours they will set out from the Cimarron corridor into the heart of the backcountry of Philmont Scout Ranch in New Mexico, where, for 12 days, they will hike over 100 miles, climbing from 6,500 feet to 12,441 in the summiting of Mount Baldy.

They must break camp by 3 a.m. to beat the afternoon storms and summit the peak.

From the crevasses of canyons to the panoramas of peaks, scouts with Troop 326 encountered complicated pasts and arduous terrain this past July, when they completed their Philmont expedition. Over vast periods of time, Philmont Scout Ranch has long been shaped by natural forces and a complex cast of historical actors. It was the region’s Native Americans who first chiseled petroglyphs on Philmont’s canyon walls. In time, Spanish conquistadores turned their gaze toward the mountains, followed by Atlantic settlers and the likes of Kit Carson and Lucien Maxwell, who were part of a larger movement across the Santa Fe Trail. They were followed by miners, loggers, and cowboys. Each community left its mark on land that refused to be subjugated, where the hospitality of wilderness transformed its guests and demanded deference.

Philmont brought scouts face-to-face with the natural world. As scouts Walter Hurley noted, “Philmont is a powerful reminder that Mother Nature is in control of our lives.” The completion of Philmont required team trust and collaboration, developed over months of preparation.

For Jacob Earle, “Philmont encouraged teamwork while being away from our normal lives, and I think we all learned how to identify and deal with harder problems.”

Max Germann reflected similarly: “All our choices impacted everyone greatly. If we made a wrong turn, we wouldn’t make it to a camp. If we didn’t cook at a certain time, we would have to cook in pitch black.

Philmont allowed us to work together as a team and form an unbreakable bond.”

The scouts walked away feeling exhausted, challenged, and grateful for this opportunity. Henry Pennington shared, “Philmont was a great experience that I would never have had an opportunity to do if it wasn’t for scouts. The memories I made there will last me a lifetime.” Henry Hurley said that Philmont was “an amazing experience that I’ll never forget!” Oliver Longenecker was struck by the overall adventure, which included spending additional time in Dodge City, Pike’s Peak, and the United States Air Force Academy in Colorado Springs. Oliver shared how the expedition “allowed me to see parts of the country I never thought I’d experience.” Grayson Nagorka of Troop 27 recalled, “Philmont was exciting! I never thought I could experience it, but I’m so happy I did!”

The scouts—joined by Steve Davis, Jon Earle, Vince Pennington, and Zach Upton—reflected on daily readings throughout their Philmont expedition. They were also invited to learn the Philmont hymn:

Silver on the sage,

Country that I love.

Out in God’s country, tonight.

Against an azure sky.

Out in God’s country Tonight.

In a world shaped by technological rigidity and polarizing politics, Philmont provided local scouts with an expansive space to build deep friendships and think deeply about wilderness. As expressed in the song, it was indeed a world of sage, starlit and azure skies, purple mountains, and aspen-covered hills. But more than that, it was a backcountry of deep, positive transformation. And for that, “Philmont, here’s to thee.”

Troop 326 is currently recruiting new scouts. We meet on Monday evenings at 7 p.m. at the First Christian Church in Danville. If you have questions, our scout leaders include Stephen Davis, Vince Pennington, David May, Mike May, Mark Upton, Logan Germann, David Longenecker, Brent Williams, Jon Earle and Danny Goodwin.