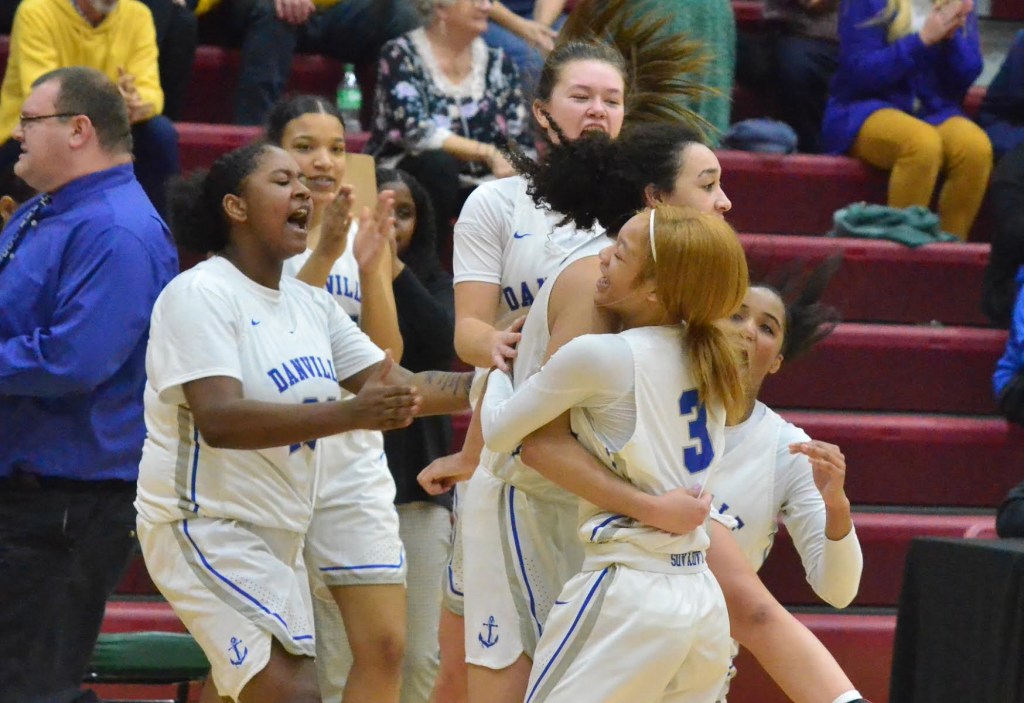 SOMERSET — It didn’t look like it was going to be the Danville girls’ night — until it was.

The Lady Admirals were being outscored and outplayed by Danville Christian throughout most of an elimination game in the 12th Region All “A” Classic on Tuesday night, but they fought back in the fourth quarter to keep their hopes of a trip to the statewide small-school tournament alive.

Danville rallied from a double-digit deficit to take its first lead with less than two minutes remaining and won on a layup by Love Mays with three seconds to play.

Danville edged DCA for the second time in six days and into the regional final. The Lady Admirals will play Somerset for an All “A” berth at 6 p.m. Friday at Somerset Christian.

The Danville boys are one win away from the All “A” as well. They defeated DCA 76-65 in their semifinal Tuesday, and they’ll play Somerset in the boys regional final at 7:30 p.m. Friday.

Mays scored 34 points to lead Danville, and the senior point guard completed the Lady Admirals’ comeback when she drove into the lane for a layup over Grace Mbugua, DCA’s 6-4 center.

“I just knew that I had to push it. My team knows that I get nervous at times like this, and they’re who I lean on and they encourage me,” Mays said. “It was all just about the shot. It wasn’t about the contact, it wasn’t about getting my body into her. It was all about looking at that square and finishing the shot and getting the ball up there.”

Danville (15-1) trailed 47-34 in the closing seconds of the third quarter before launching its rally with a 17-4 run that tied the game for the first time at 51-all with 3:17 remaining.

“It was a team effort. It was just heart,” Mason said. “Everybody was getting frustrated, and I said, ‘We’re going to win this game on heart.’”

“I felt like our conditioning in the fourth quarter would take over. I felt like they would start throwing the ball away because they don’t play fast like that all the time, and we practice like that every day.”

DCA coach Billy Inmon said it was more a matter of panic than fatigue.

“I think they got panicked in the end,” Inmon said. “We just didn’t move the ball and beat the press the way we needed to,” Inmon said. “We outplayed them and were leading most of the game. I don’t think the effort wasn’t there, but I do think the panic set in.”

Mays the Lady Admirals’ conditioning gave them an edge in the fourth quarter.

“We are very, very athletic and we are in shape,” she said. “We make sure that we are in shape the whole entire season, and we try to get up and down the floor as much as we can.”

Danville won its 15th consecutive game since a season-opening loss despite shooting 36 percent from the field. The Lady Admirals were 6 for 13 from 3-point range.

Mays was 13 for 34 from the field. She scored 26 points in the second half, taking the ball to the basket and taking up some of the slack for Desiree Tandy, a double-digit scorer who was limited by an ankle injury she suffered in the previous game.

She had the ball in her hands with 10 seconds to play and was moving into the frontcourt when timeout was called with 6.2 second left, apparently as a result of a miscommunication between Mason and an official.

After the timeout, Mays attacked the basket just as the Lady Admirals did all night. They didn’t get Mbugua into foul trouble as they had in their 58-52 win last week, but she didn’t block a lot of shots, either.

“It’s a complete game-changer when you have someone that big,” Mays said. “We have to push, we have to get off the ground, we have to be super-vertical.”

Samantha Bottom scored 12 points for Danville — she and Mays were a combined 5 for 9 from 3-point range — and the Lady Admirals got a lift on the other end from Alayah Quisenberry, a transfer from Garrard County who made her Danville debut after being ruled eligible Monday.

“She helped us on defense,” Mason said.

Mbugua had 23 points and 25 rebounds and Paisley Metz added 12 points for defending champion DCA, which raced to a 14-3 lead in the first quarter.

“I don’t think the other (loss to Danville) really bothered us that bad. I think this one’s gonna bother us when we have to watch the fourth quarter and see how we blew it,” Inmon said. “Maybe that’s just part of the growing up process that we have to have in order to do what we’ve got to do.”

Danville will try to earn its ninth All “A” berth in 12 years, but senior-led Somerset (10-5) stands in its way.

“They can play, and they think this is theirs, too,” Mason said. “Somerset’s a good ball club, but we’ve got two days.”

Owen Barnes scored 27 points and Jarius Bryant added 25 for Danville, which shot 51 percent from the field and controlled the game for the final three quarters.

The Admirals, who didn’t fare well against DCA’s zone defense in their 66-58 loss last week, were much more effective at attacking the basket this time around, even with 6-11 DCA center Lual Ayiei blocking their path.

“We were aggressive at the rim,” Danville coach Ed McKinney said. “We’ve played them some games where we were tentative. You don’t want to get your shot blocked 10 times, but sometimes you’ve got to do the right basketball thing … and that creates opportunities at the perimeter. … We were just aggressive with the dribble against the zone.”

Only 13 of Danville’s 49 field goal attempts were from 3-point range, compared to 32 of 60 in its first game against DCA.

“Because ‘Lu’ was in foul trouble, he felt like he couldn’t challenge shots around the rim, but our problem was guarding the perimeter,” DCA coach Don Story said.

There were seven lead changes in the first 4:15 but only three thereafter. The Admirals outscored the Warriors 19-8 over a 6 1/2-minute span to take a 36-28 lead just before halftime — Barnes had nine of those points — and they opened a 58-41 lead late in the third quarter.

Grayson Domidion led a balanced attack for defending champion DCA (11-6) with 17 points. Titus Boyd scored 15 and Ryan Ridge added 14 for the Warriors, who have only three games scheduled through Jan. 31.

“We’ve got a lot to look forward to, but we’ve got to readjust,” Story said. “We haven’t really looked good since maybe Christmas when we started playing a lot of games. I might try to schedule a game next week, but it wouldn’t hurt us just to practice and try to get better at a few things.”

Danville’s Jalen Dunn scored his 1,000th career point and finished with 10 points and nine rebounds for Danville, which will play Friday for its first All “A” berth since 2019.

“Our guys don’t know about the All ‘A,’ and I’ve told them, ‘You don’t know what you’re missing, and once you get a taste of it you want to go back,’” McKinney said.