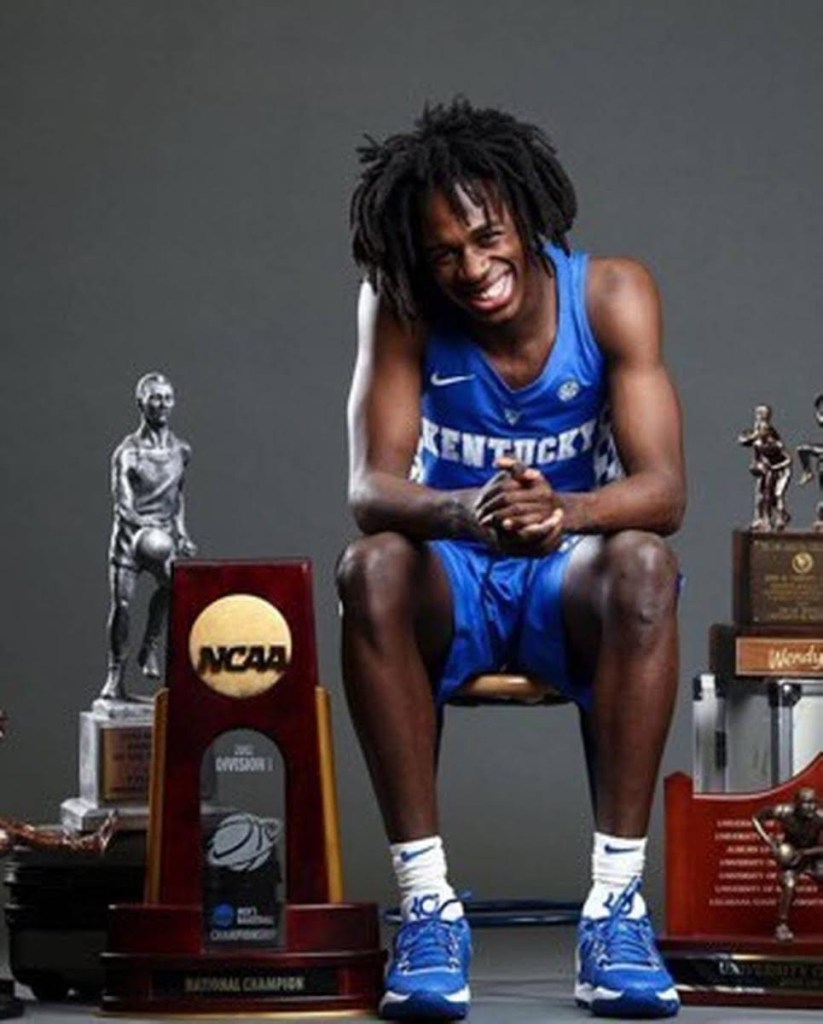 New York guard Ian Jackson, the No. 2 player in the 2024 recruiting class, is an elite athlete who has already taken an official visit to Kentucky. Photo submitted

Why would Cardinal Hayes coach Joe Lods bring a team from New York to Harrodsburg to play one high school game in early February?

“Our best player (Ian Jackson) is getting recruited by coach (John) Calipari. We thought it was an opportunity to play a game and then watch a (Kentucky) game because they are playing that night (against Florida),” said Lods.

“Kids like to travel. Adults do not want to travel but we have gone to Texas, Arizona and Massachusetts to play. Now we’ll be coming to Kentucky. What can I do when your best players want to travel.”

Jackson is the No. 2 overall player in the class of 2024 according to the 247Sports Composite and has scholarship offers from Kentucky, North Carolina, Kansas, Oregon, Arkansas, Connecticut, UCLA, St. John’s, Seton Hall, Pittsburgh, LSU Kansas State, Nebraska, Oklahoma State and others.

He was at UK’s Big Blue Madness in October and has also taken official visits to Oregon, LSU and North Carolina. He did watch Kentucky play UCLA in Madison Square Garden in New York and Calipari and assistant coach Orlando Antigua watched him play the next day.

“He is a highly ranked off guard. He shoots the ball well. He’s very athletic. He can dunk and finish around the rim,” Lods said. “He’s just an exciting player fans should enjoy seeing. He would be a really good addition to Kentucky if they get him. He’s just a really good player and nice kid.”

Lods first saw how good Jackson could be when he was in the eighth grade. He said it was obvious he was the “real deal” and would come down to how hard he pushed himself.

“He scores when he wants to. He is really elusive getting to the basket,” Lods said. “He gets into small places and uses his body so well. He can contract his body and finish in different ways. He can lay it up with his left hand and dunk with his right hand. I am already looking forward to seeing him on the college level with guys pushing him.”

Jackson, who won a gold medal with USA Basketball playing with UK signee DJ Wagner, is getting pulled in a lot of “different directions” by his nationwide recruitment according to Lobs. There continues to be speculation that he might even reclassify to the 2023 recruiting class.

“I think he is sick of it (recruiting),” Lobs said. “I don’t think it will go much longer without him committing. Kids want offers. I tell them they just need the right offer. You don’t have to have 20 schools to offer to get the right offer.”

Lobs said Kentucky coaches are “excited” about Jackson and his teammates coming to Mercer County to play. Lods said “we talk to (assistant) coach (Orlando) Antigua a bunch” about coming to the Bluegrass.

Lods knows many fans who come to the Grind Session Thoroughbred Classic will want a chance to interact with Jackson in hopes he does pick Kentucky.

“He loves interacting with people. He will sit there if we have a game at 3, sign autographs, take pictures and talk to kids until nightfall if we let him,” the coach said. “I tell him his signature will never be worth anything because he signs so many. But that’s the kind of kid he is. He just as nice a kid as you can find and fans will really enjoy him.”

Creativity can pay off in a big way for college athletes now through name, image and likeness but that never occurred to Taylor County junior offensive lineman Hayes Johnson recently when he made a phone call to Kentucky Sports Radio.

Johnson is a 6-5, 295-pound three-star prospect with eight scholarship offers, including Kentucky, Tennessee and Baylor. He’s also an avid outdoorsman.

Recently he had been scouting geese when a friend with him suggested he call a local radio station swap shop and advertise they were willing to shoot geese — which are in season now — for anyone who needed help.

“Then my friend said, ‘You won’t call KSR,’” Johnson said.

He decided he would but would not use his first name so the conversation would not turn to football recruiting. However, Kentucky Sports Radio co-host Ryan Lemond figured out it was him and they did talk football recruiting before Johnson actually gave out his cell phone number on air in case anyone listening needed someone to hunt geese on their property.

“I did a little (goose) business from the call. It was just a joke but it worked out and some people offered to let me come hunt. But I really was trying to hide my identity,” he said. “I also did get some calls from people telling where I should go to school. I know eventually I will have to change it (his cell phone number) eventually since I gave it out to everyone.”

He said he had never considered his call might eventually lead to a NIL deal in college. One perfect possibility would seem to be Hayes Calls, a company in Oliver Springs, Tennessee, that has waterfowl, deer and turkey calls.

“I would love to do something like that with NIL but this was all done just by accident,” Johnson said. “I was not looking for a NIL deal. Once you open that can of worms a lot of schools will make a pitch and I do not want to hear that. I want to hear what schools can offer me and not what donors have to offer financially. I love football. That’s why my recruitment is about, not NIL.”