Mays, Bryant lead Danville to All ‘A’ regional titles 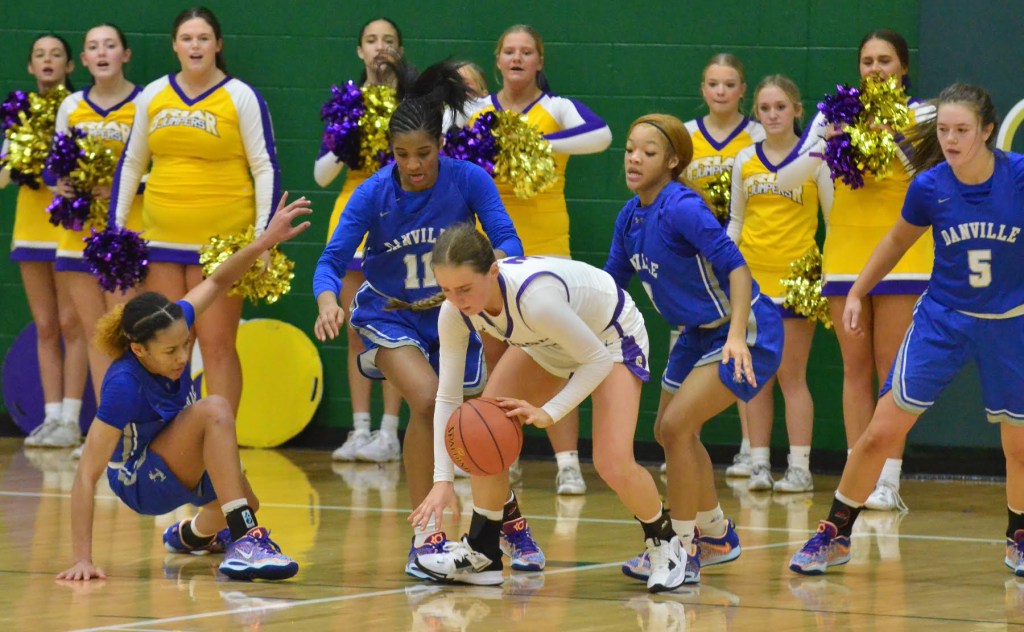 SOMERSET — The numbers were big, but the wins were even bigger.

Love Mays and Darius Bryant each reached career scoring highs Friday night to lead the Danville boys and girls into the All “A” Classic.

Mays scored 39 points and Bryant scored 37 in Danville’s victories over Somerset in the 12th Region All “A” Classic finals.

The Lady Admirals scored 10 unanswered points in the closing minutes as they came from behind for a 74-67 win, and the Admirals opened a big lead in the first half and protected it in the second half of their 70-59 win.

Danville swept the All “A” regional titles for the first time in four years, with each team cutting down one of the nets and both of their buses being met by a police escort at the Danville city limits.

Bryant and Mays combined to go 26 for 40 from the field before a near-capacity crowd at Somerset Christian, capping a memorable week for both players. Mays had 73 points in her two tournament games; Bryant had 61 in two games.

“We worked hard for this,” Bryant said. “I think we deserve it.”

Mays scored all 10 points in Danville’s decisive run late in the game, hitting a layup to tie the game at 66-all with 1:19 remaining and following with eight straight free throws.

The senior guard scored 21 points in the fourth quarter, raising her season scoring average to 23.1 per game, which is tied for the top average among 12th Region girls.

Samantha Bottom added 12 points for Danville (16-1), which hasn’t lost since its season opener.

There were 13 lead changes in this game, including eight in the fourth quarter.

“These kids, they get down and they don’t quit,” Mason said. “That’s what I love about this team: There’s never a deficit where I feel like we’re going to lose the ballgame.”

Danville’s game plan changed when forward Desiree Tandy fell into foul trouble. Tandy played less than half the game and scored only nine points before fouling out.

Mason said Mays stepped up in Tandy’s absence, driving to the basket and getting to the free throw line. Mays was 11 for 21 from the field and 16 for 22 at the foul line.

Mays said her attack also freed up teammates to score, and she said it took all of them to hold off Somerset (10-7) down the stretch.

“For us to all fight together as a team and for our sophomores and younger ones to step up and do what they needed to do to help the team, and just for everyone to be able to experience going to EKU, it’s a gift,” she said.

Somerset (10-7) controlled large parts of the first half, content to play at the Lady Admirals’ preferred pace.

“I just told them they had to beat them up the floor,” Mason said. “We’re getting outhustled, and there’s no reason for that team to beat us up the floor.”

Somerset led by five points early in the second quarter, but Bottom hit consecutive 3s to cap a 10-0 Danville run, and the Lady Admirals led 43-38 at halftime.

Myla Turner had seven points and eight rebounds for Danville. Tandy had seven rebounds, and Mays had six.

It didn’t take long for Bryant to know he had the hot hand.

The senior guard hit five 3-point shots in the first quarter and scored 22 points in the first 9:09 as Danville opened a 29-9 lead early in the second quarter.

“After probably the first shot, I was feeling good after that. I knew it was going to be a good night,” he said.

Danville (14-5) spent the rest of the night protecting that lead. The Admirals were up 40-21 at halftime, and while Somerset closed the gap in the third quarter, the Briar Jumpers never got closer than 10 points.

Bryant had 27 points at halftime after hitting seven 3-point shots. He finished 7 for 10 from behind the line and 15 for 19 overall from the field and might have gotten to 40 points had he not been 0 for 5 from the free throw line.

“He works on his game probably as hard as anybody we’ve got,” McKinney said. “In the past he’s passed on a lot of good shots, but he’s got great shooting form and it looks like it’s going in. And it could not happen to a better kid.”

Jalen Dunn shouldered much of the offensive load in the second half, attacking the basket for 18 points after halftime and 22 in all. He also had a team-high 10 rebounds.

Somerset (11-7) had the upper hand at the start of the game when Landon Lonesky drove through the Danville defense for consecutive layups in the first 30 seconds.

“I thought we were in for a long night, but once we got settled and got underneath them, we thought we could handle them off the dribble and we did,” McKinney said.

Danville’s defense took a toll, holding Somerset to 33 percent shooting from the field.

“We really got the ball pressure up where they couldn’t run their plays,” Bryant said. “We were just running up and down, trying to play at a faster pace.”