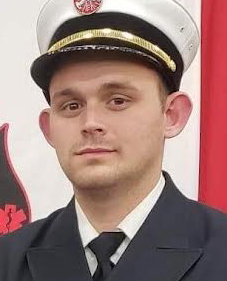 With the Chief of Perryville Fire Department Anthony Young retiring at the end of last year after 36 years of service, Perryville has promoted Lt. Nathan Stevens to be his replacement.

“The fire department has been a very big part of my family for many generations,” Stevens said. “My great-great-grandfather built the fire departments in Parksville where I was raised. I just fell into the footsteps. My dad was a firefighter so I was always around it even as a little youngster.”

Stevens took the first steps for his career when he was in eighth grade.

“Boyle County Fire Department started what was called the Explorer Program. I joined that in eighth grade and stayed in it until I graduated in 2013,” Stevens said “After graduation I became a full time fireman at both Perryville and Boyle County. Like I said I was around it all my life. Even before I was an Explorer I knew the ropes. I could park the trucks and I was all about helping and doing any thing I could do. Special operations and search and rescues have always been something I’m good at. I was in 8th grade when I found my first missing person out of Danville. She was a run away from an assisted living facility. The were searching the Millennium Park area for several hours. The guy over the Explorer Program called my dad and said they needed help. We weren’t there for 45 minutes before I found her. I have two Lifesaving Awards which is a big deal for me and I take pride in it. It’s something I love doing. Being chief is always a dream but when finally hits you that it’s a reality it’s pretty cool.”

Stevens has a great deal of respect for former Chief Young and his policy of no issue being too small.

As chief, Stevens want to attract a new generation of firefighters.

“We just started a junior firefighter program six months ago,” Stevens said. “Me and Chief Young worked really hard to get this program started. I haven’t forgotten where I came from and joining the Boyle program got me to where I am today. We are all about to getting more firefighters and junior firefighters. We don’t care if you are scared, there is a job for everybody even if you don’t want to fight fires. Anybody who’s interested or ever wanted to do it should join our team. We would love to have them.”

For more information on joining the junior firefighter program, call the Perryville Fire Department at 859-332-8361. The minimum age for the junior program is 14.