Photos from Perryville Commemoration set up

Reenactors and organizers were busy Thursday putting up tents, arranging tables, unloading horses and doing a thousand other chores in preparation for this weekend’s Battle of Perryville Commemoration. Events begin in earnest Saturday, when the admission gate opens at 8 a.m. But there is also a ghost walk at the battlefield park tonight at 6:30 p.m.

Ben Kleppinger/ben.kleppinger@amnews.com From left, Civil War reenactors Angelo Piazza, Ross Piazza, Damien Nueze and Nathan Stark enjoy a meal cooked at their campsite Thursday afternoon. The four are part of a group from Louisiana, Texas and other states that is playing the part of the Confederate Fifth Company Washington Artilley, a unit from Louisiana that participated in the Battle of Perryville. Stark said reenactments are a way of remembering the past, so that lessons learned from it won’t be forgotten.

Ben Kleppinger/ben.kleppinger@amnews.com Jake Perry of Tyler Texas builds a fire at his campsite Thursday. Perry is a reenactor with Terry’s Texas Rangers, a reenactment unit named after a military unit that was at the actual Battle of Perryville.

Ben Kleppinger/ben.kleppinger@amnews.com Rawhide Cohee of Arkansas sings “You’ll Never Leave Harlan Alive” inside his tent of clothing, supplies and other items at Perryville Battlefield. This is Cohee’s second year coming to the battlefield’s annual reenactment weekend.

Ben Kleppinger/ben.kleppinger@amnews.com A cannon sits Thursday on the edge of what will be a Confederate camp during reenactments at Perryville Battlefield this weekend.

Ben Kleppinger/ben.kleppinger@amnews.com Jason Sunderland of Westover Pennsylvania ties a canopy in place at a campsite while Harry Aycock of Baltimore, second from left, J.R. Sharp of Dayton, Ohio, third from left, and George Heffner of Ormond Beach, Florida, talk in the background. Heffner said a condo he owns in Ormond Beach is in the path of Hurricane Matthew and will likely suffer substantial damage while he and his wife are participating in the reenactment weekend. 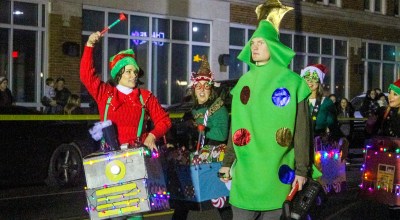 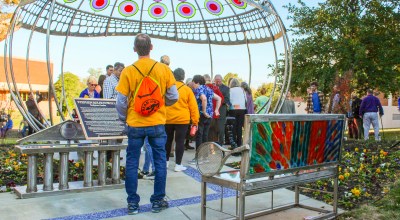 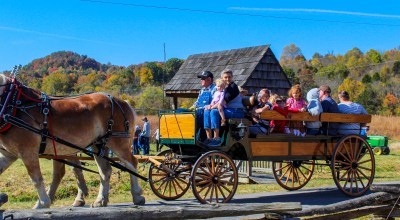