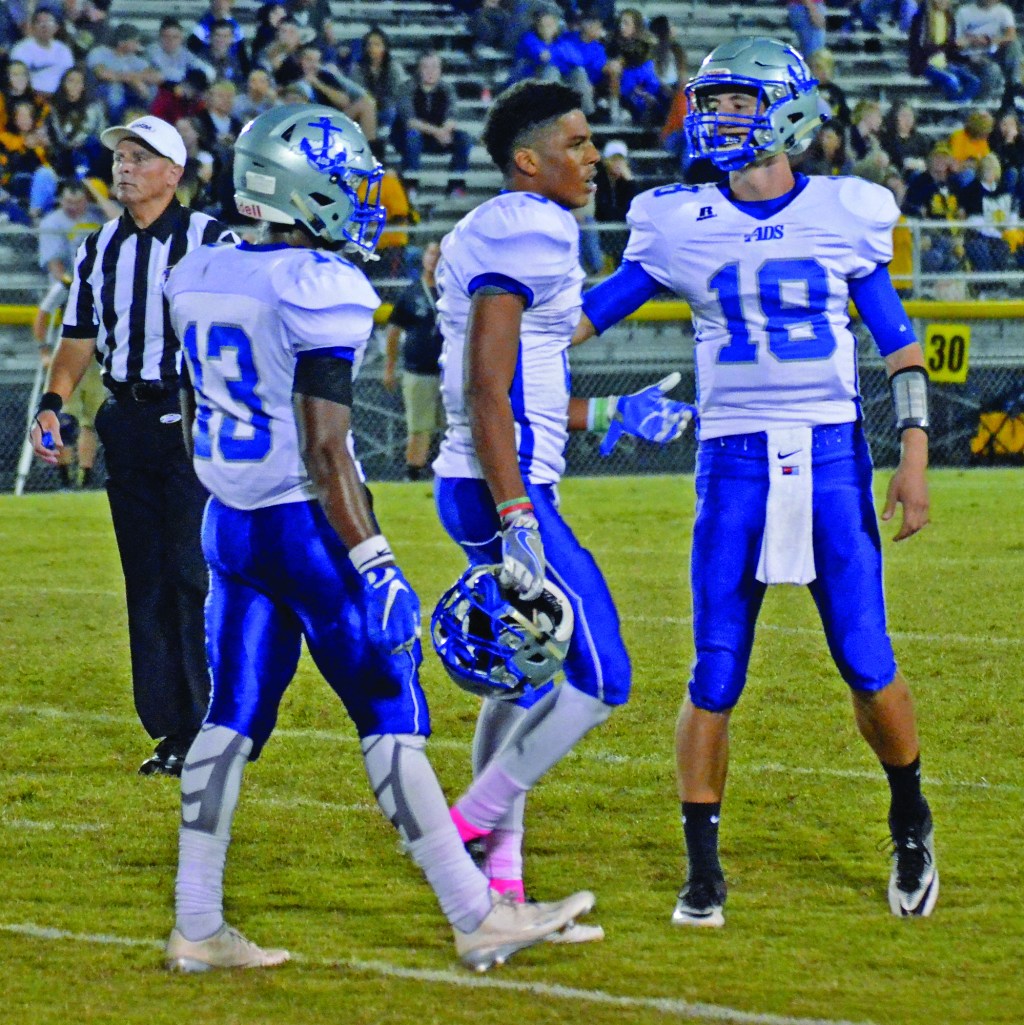 MIDDLESBORO — Zach Dampier connected on 13 of 15 passes for 275 yards and four touchdowns and surpassed 7,000 yards passing for his career as Danville clinched at least one home playoff game with a decisive 47-14 win over Middlesboro on Friday.

D’mauriae VanCleave scored three times as the Admirals scored on all six of their possessions in the first half to build a 41-0 halftime lead and set the running clock in motion.

“I thought we were as little lackluster on our first series but we really clicked after that,”  Danville coach Clay Clevenger said. “I was concerned with how we would play after the (two hour) bus ride, but I thought we really played well. Zach was right on the money with his throws and our receivers did a nice job. (Middleboro) gave us press coverage and he was able to put the ball right on the money.”

It took just 48 seconds for the Admirals to put the game away. Dampier connected with VanCleave for 28 yards on the opening play of the game and after missing on his only pass attempt of the first half — he was 11 of 12 for 192 yards and four touchdowns — hit VanCleave for a 35 yard touchdown pass and Tres Walker added the first of six extra points for a 7-0 lead with 11 minutes, 12 seconds to play in the first quarter.

Danville (7-1, 2-0 district) had four receivers with at least 40 yards in receptions while spreading the ball around the field.

Last week, Don Harris ran for 291 yards but Dampier was given time and room to throw, and the Admirals took advantage of their passing game to move the ball downfield with relative ease and didn’t have to use the run to balance their offense.

“Our assistant coaches took advantage of what they were giving us defensively and that pretty much took the running game out of the picture.” Clevenger said. “Sure, we would like to have had more balance, but we had so much success that we just stuck with what we were doing.”

Ellison Stanfield had a pair of scores from 65 and 21 yards and David Walker added a 14 yard touchdown catch as Danville led 27-0 after one period.

Meanwhile, Middleboro had success moving the football on its opening series behind the running of Anthony Jackson. The Yellow Jackets (1-7, 0-2) moved the ball from their own 34 to the Danville 33 with a single wing type of offense, but late in the drive changed to the more conventional quarterback and the drive bogged down and the Ads took over on downs.

VanCleave scored twice in the second quarter on a two-yard run and an electrifying 83 yard punt return to give Danville a 41-0 halftime lead and set the running clock in motion for the remainder of the game.

Dampier had a pass intercepted on the Ads first drive of the second half. Poised to score again, the senior quarterback made his only mistake of the night when his pass over the middle was intercepted by Corey Hairston, who returned the theft 99 yards for a touchdown to cut the lead to 41-6.

Jeremiah Wheat got that score back with a one-yard run midway in the fourth period before Middleboro tacked on one last score on a two-yard Alex Mason run to round out the scoring.

The Admirals will host one of 15 unbeaten teams in the state next week, as Lexington Christian, who came from behind to defeat Somerset Friday, enters Admiral Stadium with the district title on the line.

“It’s a big game, no doubt about it,” Clevenger said. “It will be for the district championship. We have to win to be assured the number one seed in the playoffs.”