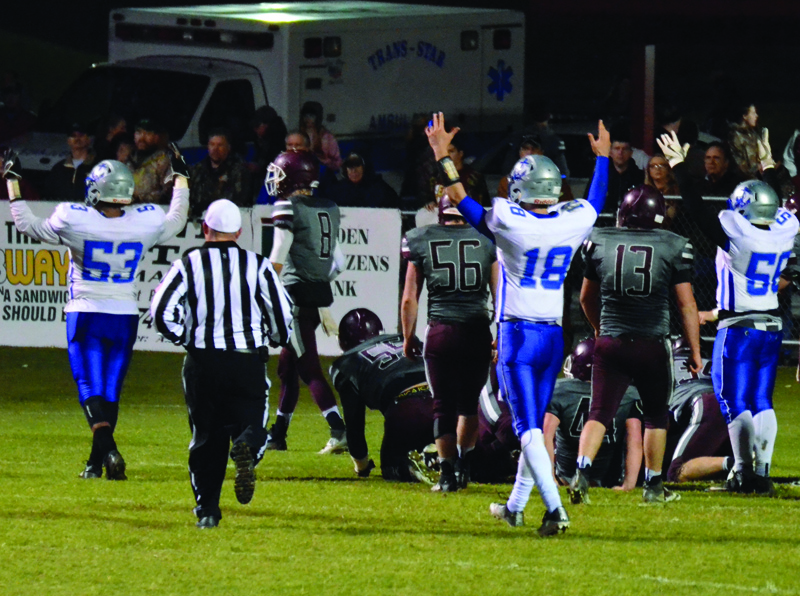 HYDEN — Dmauriae VanCleave isn’t the biggest player for Danville, but that doesn’t seem to bother the running back/defensive back when he is on the football field.

All he did Friday night was catch 10 passes for 55 yards, run for 38 yards, grab two of his team leading eight interceptions, and return a punt 80 yards for a score in leading the Admirals to a 34-10 win over host Leslie County in the Class 2A playoffs.

Van Cleave wasn’t the only hero Friday night, though. Donlevy Harris, held to just 26 yards during the first half, exploded for 97 second half yards to finish with 123 yards on 22 carries. Jaleel Warren had six catches for 76 yards and a touchdown, Ellison Stanfield had six for 60 yards, and David Walker had four catches for 37 yards as senior quarterback Zach Dampier continued to move up the state record books in terms of total yards and touchdown passes.

Dampier connected on 27 of 34 passes for 246 yards and two touchdowns and surpassed 8,000 yards to become the 26th player in state history to do so. He also threw for a pair of scores — he now has 90 during his career — and surpassed former University of Kentucky and Highlands star Jared Lorenzen with his second touchdown pass of the night.

All in all, it was a good test for the Admirals, who had to fight and claw their way to the win. Last season, Leslie came to Danville and got blasted early and often and the game got out of hand. Danville coach Clay Clevenger tried to convince his team before the game, though, that this was not the same team the Admirals faced last season.

“I tried to tell the team all week that this would be a much better team than we played last year,” he said. “They were three or four touchdowns better than they were last year and playing at home made the game much tougher. They were flying around and got after us during the first half and I thought we handled it OK, but not great. They were making us grind it out on offense and had some success in doing so.”

After a scoreless first period, Danville finally reached paydirt with 4 minutes, 31 seconds to play in the half. Leslie turned the ball over on downs at the Ads’ 30-yard line, and Danville went 70 yards in seven plays to score. VanCleave had a run of 10 yards and an eight yard catch to get the drive started, and Warren had a 13 yard catch before Dampier hooked up with a wide open Walker for the 30-yard touchdown pass. Tres Walker tacked on the first of four extra point kicks to give the Ads a 7-0 lead.

The lead was short lived, though. Four plays into the next series, Leslie senior quarterback Seth Melton faked a screen pass to Luke Lewis, then found a wide open Tyler Dixon for a 58-yard touchdown pass to tie the score at 7-7 with 3:12 to play in the half.

To make matters worse, Danville was called for a personal foul on the extra point try when they roughed kicker Shaun Baker and the Eagles kicked off from the Ads’ 45 yard line. Conner Braydon recovered the onside kick at the Danville 27, and Baker drilled a 38-yard field goal with room to spare to give Leslie its only lead of the night at 10-7.

Danville, however, put together an 8-play, 65 yard drive and scored just before the half ended when Dampier found Warren in the corner of the end zone for a 20-yard score and the Ads carried a 14-10 lead into the intermission.

“The touchdown just before the half was huge,” Clevenger said. “It gave us some momentum heading into the half. I challenged them at the half. We didn’t have a running game during the first half (15 yards on 15 attempts) and we knew we had to have a running game if we were going to win. Our line did a much better job in the second half and Don hit the hole hard on each run. That enabled us to get the pass over the middle to Jaleel in the second half and he did a nice job of holding onto the ball in traffic.”

Meanwhile, with the exception of the one breakdown on the pass play, the defense played well the entire game.

“They played well,” Clevenger said. “They had a few big plays here and there but (Leslie) was never really able to sustain anything on us. They didn’t want to throw the football, but once we were able to get the lead it forced them to do so. Once we got the lead, the defense shut them down.”

Danville’s offense virtually had its way with Leslie during the second half. After holding the Eagles’ on downs on their first series, Danville promptly went 64 yards in nine plays and scored when Harris, who ran for 44 yards on the drive, crashed over from one-yard out.

Van Cleave’s electrifying 80 yard punt return, a case of Leslie out kicking its coverage, gave the Admirals a 28-10 lead, and Harris capped the scoring on a 32-yard run with 2:23 to play.

Now it’s on to Lexington Christian for a rematch with the Eagles next week in Lexington.

“We have to get healthy and have a good week of practice, no doubt about that,” Clevenger said. “The first game was a great game, and we have to figure out how to score a couple more points than them. It should be a great game.”