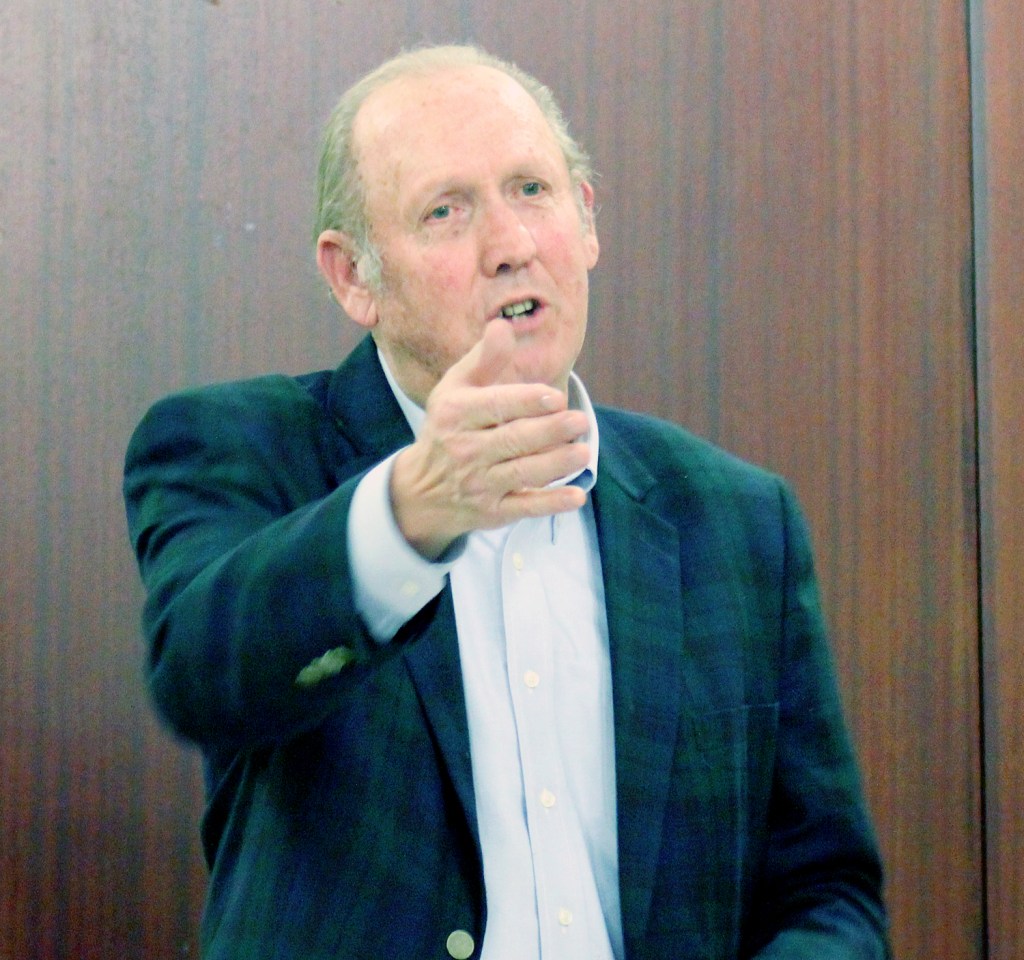 STANFORD — Plans are in the works for an estimated $4.1 million water line project in Stanford.

“They’ll be building a new 12-inch line from the water plant out there into town. They’ll (be) building an 8-inch line from, I think, around Logan Avenue all the way down to Rowland. And then 25 streets in here will have new water lines in town,” Carter said.

It’s a major project for the community, Carter said, and about half of the cost of the project — $2 million — will be funded through grant money.

“It’s going to probably start this fall. That’s what we’re hoping. This money has to be spent,” he said. “About $2 million of this is grant money and I think about $1.3 million will be .25 percent interest rate. The rest of it will be real low.”

Documents detailing the 25 streets in the city that will receive new or replaced water lines were passed out during the meeting.

“They are old lines,” Carter said. “They’re hoping to get a major contractor that can come in and do several lines at once. Hopefully we can address some of the issues we had on Danville Avenue.”

New water lines were installed on Danville Avenue and the dust that resulted from the dry weather and gravel was a point of complaint for several residents throughout the project.

The new water project is estimated to take about nine months to install all of the new water lines, Carter said.

“The beautiful part about this, tying them all together where water is flowing freely, it’s a lot better quality of water and boosts your pressure,” he said.

There are four streets — Indian Trails, Greenbriar Street, Eastwood Drive and Rosemont Street — designated to receive new water lines. The current water lines of the remaining 21 streets will be replaced, according to the water project map.

“It’s a major project for us and this community,” Carter said. “To have this much pressure, help our fire hydrants — everything about it is positive. WIth all the problems we had with Danville Avenue, if we hadn’t done that we probably wouldn’t have gotten the new 75 jobs coming to town. You can’t have too much water.”

Industries looking to move into town always ask about water before deciding, Carter said, pointing to the new high-tech greenhouse that just located in Stanford.

“I think it’s a positive step,” he said.

Carter said he will be inviting Water Department Manager Ryan Owens to the next council meeting to discuss the project in more detail.

“I think it’s going to happen but this $680,000 sidewalk grant that the county has had for several years now, they’re finally getting the paperwork together,” Carter said. “It might just happen this fall. I’m not saying it will but it could.”

Carter said the proposed sidewalk project would start at Foster Lane and travel down Herndon Avenue, Lancaster Street and then go down to U.S. 27 and left at the intersection.

“In that process, they’re supposed to come down Herndon Street,” Carter said.

Councilwoman Peggy Hester asked where the funding for the project originates.

“It’s a federal grant that comes down through the state,” Carter said. “It’s 80-20 (grant-match) I think. The county can do the labor and road work for their part of the match, I’m pretty sure that’s how it works.”

Carter said most of the project will be on city right-of-ways and he has told the county the city will support the project any way it can.

Councilman Scottie Ernst said this is the first phase of a longterm sidewalk project.

“It’s in the planning stages,” Carter said. “The judge thinks they can maybe do it this fall, if everything goes as plans. I think it’ll be a great asset.”

Councilwoman Peggy Hester questioned the city’s priorities as far as fixing sidewalks and not roads that need attention.

• Appointed Brenda Bertram to the Board of Adjustments.