STANFORD – A man was arrested on drug-trafficking charges Saturday night after sheriff’s deputies observed a vehicle swerving across the roadway.

It was about 9:55 p.m. on March 11 when Lincoln County Sheriff’s Deputy Chase Marcum received a complaint about a reckless driver traveling southbound on U.S. 27 near the Lincoln County High School. 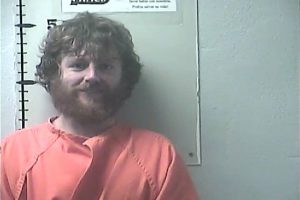 Marcum said he was traveling northbound on U.S. 27 and passing the high school when he observed the reported black Lincoln Town Car. The deputy turned around and caught up with the vehicle.

“He was swerving back and forth on the roadway, speeding up and slowing down,” Marcum said. “Showing signs of careless driving and possible intoxication.”

Richard Simpson, 30, of 3766 Perkins Madden Road in Vicco, was identified as the driver of the vehicle.

Marcum then initiated a traffic stop during which Simpson was unable to produce his driver’s license or insurance card, according to the deputy, and was identified using his social security number.

When Marcum returned to Simpson’s vehicle to ask why he didn’t have his license, the deputy said he smelled a strong odor of marijuana coming from the vehicle.

Given the nature of his driving at the time of the traffic stop, Simpson was given a field sobriety test, which Marcum said he passed.

Simpson was asked if there was anything illegal in the vehicle, to which he first replied “no,” according to Marcum. When asked a second time, Simpson allegedly admitted to having a “little marijuana.”

Given Simpson’s prior criminal history, which Marcum said includes charges of burglary and drug-trafficking, the rest of the vehicle was searched as well. A marijuana cigarette and rolling papers were allegedly found during the search.

Simpson was lodged in the Lincoln County Regional Jail on several charges including carless driving; trafficking in marijuana (eight ounces or under); possession of drug paraphernalia; and possession of marijuana.