STANFORD — A 19-year-old was arrested in connection with an alleged sexual assault on a Lincoln County school bus last week. 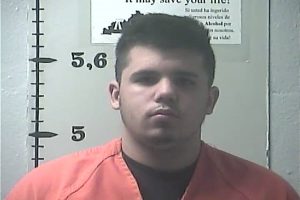 Ryan Allen Rayburn, 19, of 2865 U.S. 27 south, was arrested Friday, March 17, by Stanford Police Detective Tim Morris and now faces two charges of first-degree sodomy in relation to an incident that occurred the day before on a school bus.

Morris said the investigation began last Friday morning after the parent of a student lodged a complaint.

Police reviewed video surveillance of the bus ride and determined that Rayburn had “engaged in deviate sexual intercourse” with an 11-year-old male and a 14-year-old female “by forcible compulsion,” the arrest citation states.

After receiving the complaint, Morris said he was called and began interviewing individuals and reviewing video tape from the two cameras situated at the front and back of the school bus.

“The (behavior) on the bus was pretty crazy,” Morris said.

Rayburn was arrested at Fort Logan High School Friday at about 2:20 p.m., according to Morris.

Rowe said school officials are actively cooperating with local police in their investigation.

Morris said the investigation is ongoing at this time.