STANFORD – Patrons of the Bluebird Cafe will have a new option in the future when it comes to their dining environment as plans are underway to create an outdoor eating area in front of the restaurant.

“What we are proposing to do…we would like to create an outdoor cafe setting in front of the Bluebird, the ice cream shop (4 Generations) and basically that entire block,” Gooch told council members. “So in order to have enough room for an outdoor cafe along Main Street, we need to take up the parking spaces that are just in front of that block of buildings.”

Gooch said the sidewalk will be extended by about eight feet, with large bollards and decorative chains placed around the eating area to minimize risk to diners.

According to Gooch, the plans for the project have been ready but when they took them to the Kentucky Transportation Cabinet to apply for an encroachment permit, they were told to have the city apply for the permit instead.

“…In the past, (when) the person who owns the property that adjoins the state right-of-way decides to do something on the right-of-way, they apply for the encroachment permit and either gets it or is denied,” he said. “Well, the Department of Transportation, in this particular instance, has decided for some reason…I’m not exactly sure why they’ve decided this and they may change their mind.”

Whether the permit is obtained through the city or through First Southern National Bank, who owns the property and will fund the project, Gooch said they would still like the city government’s support.

Main Street traffic will not be impacted by the new addition, council members were reassured, and only five or six parking spaces in front of the Bluebird and other businesses on that block will be lost.

The goal, Gooch said, is to encourage visitors to park at a general location and walk down to Main Street where they can then walk to each of the shops and restaurants.

There are many future plans, Gooch told the city council, including the replacement of intersections with “brick paver crosswalks.”

“There are lots of future plans,” he said. “This is the first phase of a seven to eight million-dollar project, kind of. The corridor through the building that separates the brick-oven pizza place (to open in the future) and the Bluebird and the ice cream shop… that will allow people to park in the rear, walk through there and get to Main Street. Hopefully we’ll utilize more off-street parking and give people a better place to park.”

Plans for a rear-dining area are also in the works, which should make the back side of the Bluebird and that general parking area more attractive as well, he added.

Garland showed council members a current design he is working on for the area behind the Bluebird Cafe.

“This brings more retail accessibility to the backside of the buildings, brings people through the buildings…,” Vanhook said. “If some of these things are successful, yes parking is going to be an issue. But parking is going to be improved by some of the other phases of what we have planned, by having people park in other areas and again, making them easily accessible through the block and not always around the block.”

Councilwoman Peggy Hester asked whether the city could be held liable in the future if someone were to get hurt while dining outside in the new eating area.

Since the property is owned by FSNB and Main Street is a state highway, City Attorney Christopher Reed said he doesn’t believe the city is at all liable.

“This is their project, they’re going to be insured through their own bond,” Reed said. 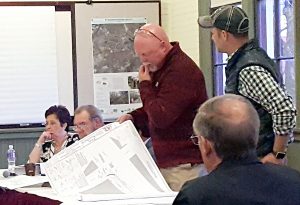 Stanford City Council members were given sketches of the future outdoor dining addition to review during their monthly meeting last Thursday.

Storm water currently sitting underneath the buildings presents a problem but Gooch said it’s an issue that will be fixed through this project by rerouting the storm water and leading it to St. Asaph Creek.

“It’s a win for everybody, for the city and the state,” he said.

Reed prepared a resolution for the council to approve which grants Gooch the authority to draft an application to the Kentucky Highway Department, District 8, for the necessary permit to proceed.

The resolution gives support for the project stating, “the City of Stanford desires to improve opportunity for business expansion, increase walking paths and outdoor activities for its residents, non-resident visitors, business and property owners and would further enhance the health, welfare and safety of its citizens.”

The resolution passed by a unanimous vote. Councilwoman Sara Givens was not in attendance.

Caterpillar is on its way out of Boyle County, but it’s leaving behind a building that’s attracting a lot of... read more