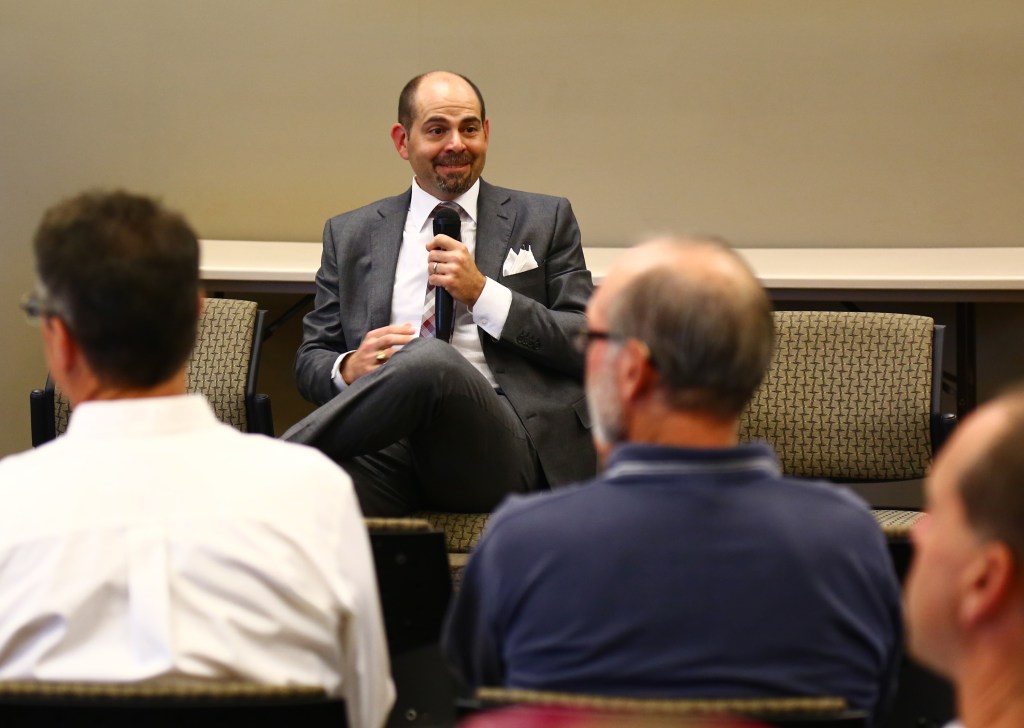 Editor’s note: This is the first of two stories about Tuesday night’s public meeting to discuss the strategic economic development plan for Boyle County. Read the second part here.

Tuesday night was the final public forum in the months-long process of developing a strategic economic development plan for Boyle County. 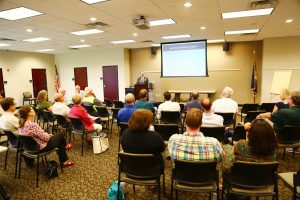 About 40 people attended the meeting, which served largely as a question-and-answer session with the lead consultant on the project, Kyle Talente with RKG Associates.

Talente told the audience he helped facilitate creation of the strategic plan, which is designed to guide economic development in Boyle County for the next five to seven years, but it was the working group of local leaders who had final say.

“They were the decision-making body. I provided the recommendations; they were the ones saying yes or no,” Talente said. “… We did not create the plan, we were the technical advisers to help weave it together.”

The final plan will not actually be released until June 16, but a draft that outlines the main ideas of the plan has been out since April. Leaders have said the final plan will have a high level of specificity and “granularity.”

The plan calls for a restructuring of the Danville-Boyle County Economic Development Partnership to focus the agency on “core” economic development activities, including business attraction and retention; marketing of land; and workforce development. Four agencies that are currently voting members of the EDP would become non-voting members and take on more independence — the Convention and Visitors Bureau, the Heart of Danville, Main Street Perryville and the Chamber of Commerce.

The plan also outlines the need for more staff at the EDP, beginning with the hiring of a chief operating officer to focus on “internal” or local work, while current President and CEO Jody Lassiter focuses on external marketing.

Talente cautioned those in attendance against taking the final plan as it is and not further modifying it to fit what the community wants.

“This is not meant to be a literal document. It is a working implementation strategy,” he said. “You need to create your business plan around that and then tailor it to what the financial, economic, political and social realities of this community (are). … At the end of the day, you need to be able to put something out there that the community can support, your EDP board can support, your staff can support and that the market is going to want.”

• health services and product development; and

It also points to other community strengths, such as Boyle County’s high quality of life and low cost of living. That means it’s a great place to attract people with telecommuting jobs, who work over the internet and don’t have to come into an office.

“We believe this community is in a great position to market and attract folks that are not location-specific,” Talente said. “We offer a tremendous quality of life … it’s a phenomenal package that you can put forward.”

“This process is done. But this is just the planning phase,” Talente said. “There is a whole lot more that needs to go on for you guys to realize what this plan’s potential is for our community.”

Talente said based on the long-term strategic plan, leaders need to develop one-year plans. And the long-term plan needs to be redone every five to 10 years.

“The world is going to change around you so you should be constantly reviewing this,” he said.

The first question came from Danville City Commissioner Kevin Caudill, who said there’s an opinion in the community that sending someone out for face-to-face meetings with business prospects, which is what Lassiter does, is not a good use of money and that efforts should focus instead on the area’s internet presence.

“I don’t believe that, but how do you respond to that?” Caudill asked.

Talente said he agrees that a good online presence is “critical.”

“Economic development is as much art as it is science,” he said. “I’m not going to sit here and lie and say there’s only one way to do it. I advise my clients (that) you’re going to be a lot more successful casting your net wide than focusing it on one specific approach or one specific area.”

Talente said “sitting back and waiting for the prospect to come to you” means the area could miss out on some opportunities.

Local attorney Mark Morgan asked about how to succeed in economic development without harming the aspects of the community that increase quality of life, such as parks, small businesses and diverse schools.

“To me, it’s making sure that you’re using the principles that the Smart Growth movement out of Washington, D.C., talks about, which is let’s identify the areas where we’re going to grow, grow them first.”

Danville City Commissioner Rick Serres asked Talente to elaborate on his recommendation to remove the CVB, Chamber of Commerce, Heart of Danville and Main Street Perryville as voting members of the EDP.

Talente said he believes the agencies “absolutely … should be working together when it makes sense.”

“I don’t think we need to be as co-joined as we are,” he said. “In fact I think if we create a little space and allow each organization to focus on its mission … then each organization not only is going to flourish, but we’re actually going to make those coordination efforts even better, because we’re going to start moving away from some of those ‘this is my turf, your turf;’ ‘this is my nickel; your nickel.’

“… Our recommendation isn’t to stop the partnering, it’s to create the relationships more helpfully, so that the partnering becomes easier and frankly, more fruitful.”

Danville City Manager Ron Scott asked whether constructing a “spec building” — an industrial building built without an occupant and made available for businesses interested in moving in immediately — is “critical to our success?” 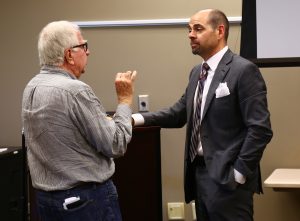 Talente said he believes it would be critical for growing “primary employment,” which is employment that produces exports and brings revenue from outside the community into the community. But it wouldn’t be critical for other economic development goals, such as improving the attractiveness of downtown Danville.

Land acquisition and construction of a spec building may not be something that Boyle County is ready to tackle right away, he noted. Leaders will have to pick and choose some items from the “menu” of economic development options the strategic plan provides, he said.

“If you try to eat the whole menu, we don’t have the money or the people to accomplish all that right now,” he said. “… Let’s be strategic and not ad-hoc, let’s prioritize, let’s scale our expectations to what we’re putting into the game.”

Magistrate John Caywood lamented a lack of community participation in local boards and asked how leaders can get more people to participate and get involved with economic development.

“We’ve got to start with having people willing to get in the game and not on the sidelines,” he said.

Talente said there is a “domino effect” that stems from leaders in a community. 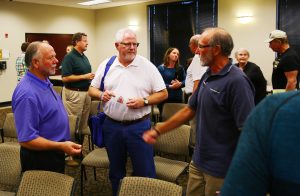 “It starts with our leadership. If they are bought in, it makes it a lot easier for people to then have an open mind and listen to what’s going on,” he said. “The next level is our working group, the representatives from the nine different partners that are on this organization taking ownership and getting out there and being proactive.”

From there, leaders need to “empower” community members who want to volunteer with training.

The EDP also needs to be good at disseminating information to the public, and at gathering input. Talente said a website that allows people to submit ideas for economic development anonymously would be a good step.

“You guys suffer from volunteer fatigue in this community. You have a very small group of people doing almost everything,” he said. “… I would argue part of that challenge is people need to feel welcomed to join in. … If you don’t have the elected officials, if you don’t have the movers and the shakers, it’s going to be very, very hard to motivate John and Jane Q. Public.”

Read the second part of this story here.

Gallery Hop returns, features some artists new to the…