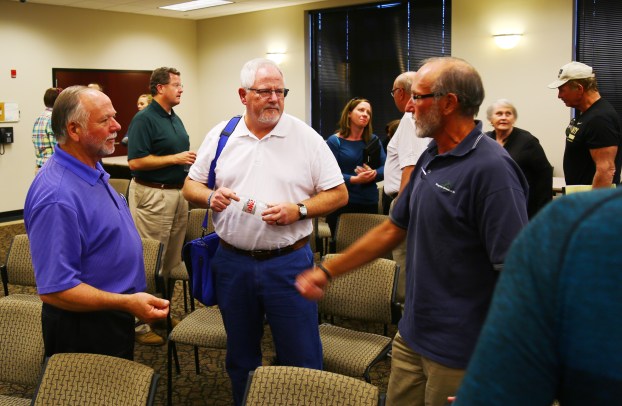 Editor’s note: This is the second part of a story about the final public meeting held Tuesday night to discuss the strategic economic development plan developed by RKG Associates and the Danville-Boyle County Economic Development Partnership. Read the first part here.

Economic development consultant Kyle Talente handled about 15 questions from elected officials and members of the public at Tuesday night’s meeting, as his work in Boyle County neared an end.

Talente, a co-owner of the consulting company RKG Associates, has been retained since September at a cost of nearly $84,000 to conduct an in-depth study of the area and help leaders with the Danville-Boyle County Economic Development Partnership produce a strategic plan for the next five to seven years. The final plan is expected to be released on June 16; the Danville City Commission could accept it at its June 26 meeting, signifying the end of development and the beginning of implementation.

Among those who asked questions Tuesday night was Danville City Commissioner J.H. Atkins, who told Talente there are two parts of the plan “I hear the most about:” the proposal to restructure the EDP and the call to hire additional EDP staff.

Atkins asked Talente to restate his proposal for a new EDP board of directors, and Talente obliged: six voting seats for the Boyle County Industrial Foundation; three for the City of Danville; three for the Boyle County Fiscal Court; one for the City of Perryville; one for Junction City; three for platinum or gold sponsors who contribute to the EDP’s budget; and three at-large seats for business professionals, who would be voted on by the rest of the board.

Atkins said he wants it clear this proposed reorganization hasn’t happened and isn’t happening yet — that it is merely a proposal.

Talente affirmed — the existing EDP board must vote on what it wants to do and could modify the proposal, or do nothing at all.

On the question about hiring new staff, Talente said many of his recommendations for how to improve economic development in Boyle County can’t be accomplished without another staff member. As it stands now, the expectations on the EDP far exceed the funding the community is providing, he said.

Danville Mayor Mike Perros asked Talente about what neighboring communities are doing as far as economic development that Boyle County is not doing.

Talente said some are investing in real estate and constructing spec buildings that are available for industrial businesses to move into immediately.

“One of the assets that is being brought to the table in our market is just-in-time, ready-to-move-in facilities. It’s not to say that you have to do that and you won’t over time find success in finding a prospect that is willing to build their own building, but there’s a lot more prospects out there that want ready-made than want custom-built.”

Boyle County Magistrate Patty Burke, one of two magistrates along with John Caywood to attend the public meeting, said she believes the community needs to do a better job of educating students about the work that’s out there and available for them.

“If we don’t get the word out to our kids that there’s work here, you don’t have to go to college, that there are opportunities that are knocking on your door — we’re not doing a good job of that. I’m sorry, we’re just not. And kids are thinking they’re failures before they even get out of high school,” she said. “So I think we need to start educating our children on what we have and what they can do.”

“You’re hitting on something that both professionally and personally I am very passionate about, which is we as a society have focused too much on the four-year college education,” he said. “There is a lot of economic activity and opportunity out there for someone who doesn’t need to go that path.”

Talente said there many training programs and resources available already in Boyle County; the problem, he said, is a lack of awareness.

Boyle County needs to be “making middle-schoolers aware and their families … aware that by 19 or 20 years old, you could be making a very livable wage with benefits, rather than saying ‘you’re never going to college so you might as well just forget about school.’”

Such “investments” in children will take years to create a return, he said.

“If I’m talking to a 13-year-old kid today, that’s a six- to eight-year investment strategy that I’m not going to get anything for until then.”

Burke said the drug problem in the community is contributing to the problem and harming the workforce.

Community member and perennial critic of the EDP Randy Graham said he believes there are private landholders who are competitors with the Boyle County Industrial Foundation, which would have six voting seats on the EDP under Talente’s proposal. Graham asked how important it is to have the other private interests represented on the new board.

“I think it’s important that we have broad representation on the Economic Development Partnership,” Talente said. “I think that the (EDP) needs to do a better job of increasing awareness of how it does work with the other private organizations that are engaged in real estate investment and real estate development.”

Talente said “there are a lot of recommendations that we have come up that will help address some of those concerns.” He pointed to a plan for a master property list to be developed that would include all available non-residential properties in Boyle County as one example.

“If we only want to spend $175,000 and we only want to pay an executive director $15,000, then we better sit on our laurels and hope to God the sky opens up and we get that lucky prospect that comes in here,” Talente said. “…From RKG’s perspective, we tend to want our clients to be masters of their own fate rather than rely upon others for it. And that’s the approach I take in the recommendations I make to my clients.”

“And I concur,” Graham said.

After fielding all the questions, Talente wrapped up the meeting by telling the 40 or so in attendance that they need to work on economic development “constructively” — which could represent a change from some “destructive” ways people have behaved in the past.

In order to be successful, everyone needs to work “creatively, cooperatively and respectfully” together, he said.

“As my wife tells me almost daily, ‘it’s not what you say, Kyle; it’s how you say it, and I don’t like the tone of your voice.’ That is just as true when you talk about that we are led by volunteers; when you talk about our expectations exceed capacity; when you talk about we are a very diverse community,” he said. “… You’re never going to find that perfect venn diagram where everybody is going to be satisfied with everything. … We can disagree, but let’s keep it on a substantive discussion and try to find if there’s a middle ground, rather than take the first opportunity to attack each other.

“… Your greater challenges are addressing your internal issues than it is your competitiveness with the external world. And I think that this community is destined for great success once we get all the horses pulling the carriage in the same direction.”

Wilderness Trail Distillery is planning a $9.91 million expansion at its Danville farm that is projected to sextuple its output... read more