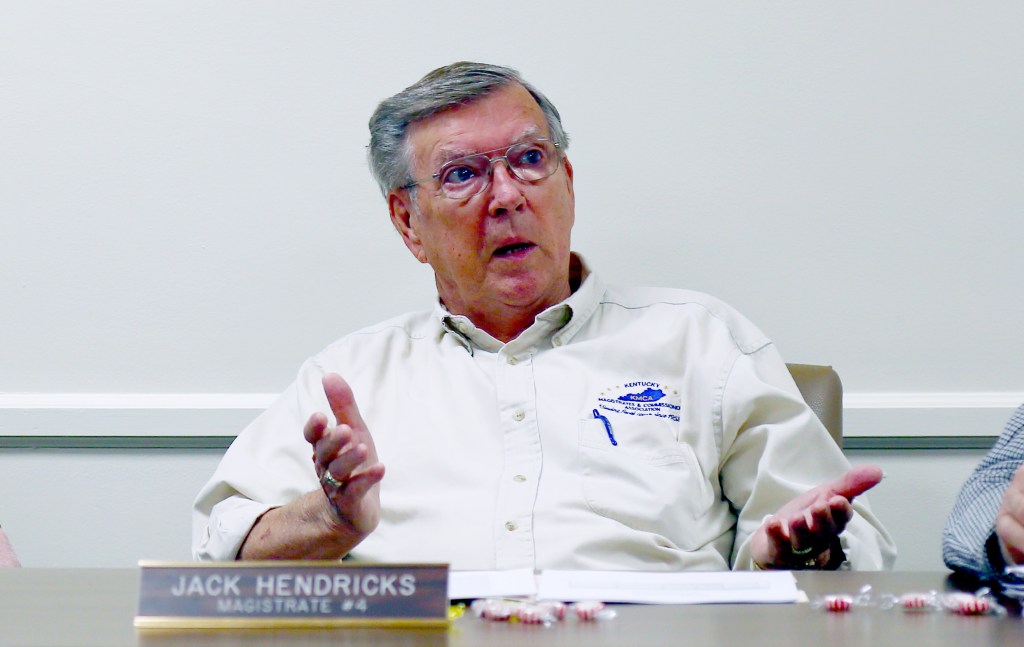 Editor’s note: This is the first of two stories on Tuesday’s meeting between the Boyle County Fiscal Court and economic development consultant Kyle Talente. Read the second part of the story here.

The meeting was arranged so that magistrates could ask questions about the proposed strategic economic development plan, and they did — for close to two hours.

A portion of the time was spent reviewing the timeline leading up to today:

• The Danville-Boyle County Economic Development Partnership decided around two years ago to form a working group to look into the creation of a strategic plan.

• All nine member agencies in the EDP were given the option of putting up to two people on the working group.

• The working group studied the issue and decided it would be good to have an outside consultant guide the creation of the plan.

• The group vetted 13 companies who bid for the work and recommended RKG Associates.

• RKG Associates was hired through a contract with the City of Danville for $83,795.

• Kyle Talente of RKG has been working with the working group since September 2016 on the strategic plan, and has presented a broad “menu” of many options he believes could improve economic development success in Boyle County.

• The working group selected about $170,000 worth of those options as a proposed first-year investment, and then asked Danville and Boyle County what they would be willing to contribute.

Many of the magistrates’ questions for Talente Tuesday morning focused on the proposal to add a chief operating officer position at the EDP.

EDP Chairman Ben Nelson and Talente told them the COO would be someone who would focus on “internal” matters, including workforce development, business retention and growing the amount investment in the EDP from the private sector.

Nelson and Talente said adding the COO position is essential before many of the other options on the “menu” can be accomplished. The salary for the COO position is proposed at $75,000, but some of that funding is already in the EDP’s current budget. It would take about $38,000 of additional investment to make that position a reality, Nelson said.

Last year, the EDP had already planned on adding a “project manager” with a salary of $50,000, but held off in order to see what RKG’s recommendations were, Nelson explained. The recommendations wound up being to hire a “seasoned economic development professional” as a COO instead of the “entry-level” project manager position, Nelson said.

“So correct me if I’m wrong — the information you’ve given us so far, (the EDP) would probably have done this if we hadn’t had (RKG) here, am I correct?” Sammons asked Nelson. “This is something you would have worked up and said, ‘this is what we need?’”

“To answer your question directly, what I did for your community, you could have done internally,” Talente said. “The reason why my industry exists is who was going to take the time and herd the cats to collect all the information, to distill it, and then come up with a strategy — but also do their regular job?”

Magistrate Patty Burke added that a “key” of bringing Talente from the outside is “he is impartial.”

Magistrate John Caywood said if the community hadn’t brought in Talente, local people may not have identified all of the possible options that Talente found.

“My point is Kyle has proven that he was valued at the $80-some-thousand that was paid,” Caywood said. “That he created that type of additional work as well as ideas from the perspective of the United States, as opposed to just Boyle County.”

Nelson returned to the point that many of Talente’s proposals can’t happen without hiring the COO position.

“When you go through Kyle’s recommended menu, to make a lot of that happen, it’s not buying stuff — we need more arms and legs to go do it,” Nelson said. “… We can do more with more staff and it’s not having to buy stuff.”

“That’s important because part of the community lack of buy-in is based on some of this that we talked about, and that’s the cost of personnel,” Magistrate John Caywood responded.

Shortly after that, Sammons looked at the proposed EDP budget and joked, “I don’t see Caywood — not on there. He must be getting a kick-back.”

Since the strategic planning process began, some members of the fiscal court have not been as gung-ho as others in the community about the nearly $84,000 project.

Magistrates have expressed doubts about the project’s usefulness and questioned if the Danville-Boyle County Economic Development Partnership has been effective. At an April meeting on the topic, Sammons said he gave EDP President Jody Lassiter an “F” on attracting new businesses to the area. Currently, the fiscal court has not included any additional funding for the proposed new economic development activities.

The City of Danville has $40,000 in its proposed budget for additional EDP funding, but those dollars are listed as a matching grant, meaning other public or private entities must also contribute $40,000 in new funding before the city’s money would be provided.

Nelson said Tuesday morning that due to limited financial support from the city and county for the $170,000 proposal, the EDP will have to revise its plans and eliminate a lot of the proposed new spending.

But, he added, he hopes to be able to move some money in the budget around and still be able to hire the COO position, even without any added support from the county. The EDP will no longer contract with the Convention and Visitors Bureau for marketing and communications in the new fiscal year, which will free up that money to potentially fund the COO position, he said.

According to a financial agreement provided by the EDP, the organization is paying at least $21,600 to the CVB for marketing and communications this year.

“Let me make sure I’m understand what you’re saying,” Magistrate Jack Hendricks said. “If you don’t get any other funding than what you’ve got right now, you’re going to move money around wherever you can and still come up with that second person to help Jody at the $75,000 level? So you will have the second person regardless is what you’re saying.”

Nelson said he hopes to accomplish that but there is no guarantee it can be done, and such a plan would have to be approved by the EDP board.

“It seemed like when you were saying if we didn’t pony up more money, we was going to lose that second person totally, and it doesn’t sound to me like that’s the case,” Hendricks said.

“There’s no guarantee that that second person can be hired without more money,” Talente said. “They’re going to strive for that.”

Caywood said RKG’s recommendation to maintain a majority of private-sector members on the EDP board makes him “a little uncomfortable.”

Talente said a private majority on the EDP is necessary if officials want to continue getting around $237,000 in funding from private entities, including the Boyle County Industrial Foundation and the EDP’s Chairman’s Circle donors.

Talente said it makes sense to have private-sector members on the board who are running businesses and have expertise.

“But more importantly … I don’t want to walk away from the $127,632.18 (from the Industrial Foundation), the $110,000 that collectively is contributed by private individuals,” Talente said. “… This is the trade-off that the public sector makes in order to not have to pay for 100 percent of economic development.”

Caywood said the EDP faces a problem with community buy-in that hurts its ability to get more private investment.

“If they don’t believe in what you’re doing, how do you get them to pony up and make an investment?” he asked.

Talente said the EDP needs to do more outreach to private businesses and develop that buy-in by finding out what those businesses are interested in contributing to. That’s a job the new COO position would theoretically take on.

“If you’re going to ask someone for a substantial amount of money … you have to understand what motivates them to give and then try and tailor what you’re going to do,” Talente said. “… We have to get the capacity to create those relationships so we can understand what motivates them and see if that does or does not cross-sect with what the (EDP) is going to be doing. And that requires bodies.”

Read the second part of this story here.