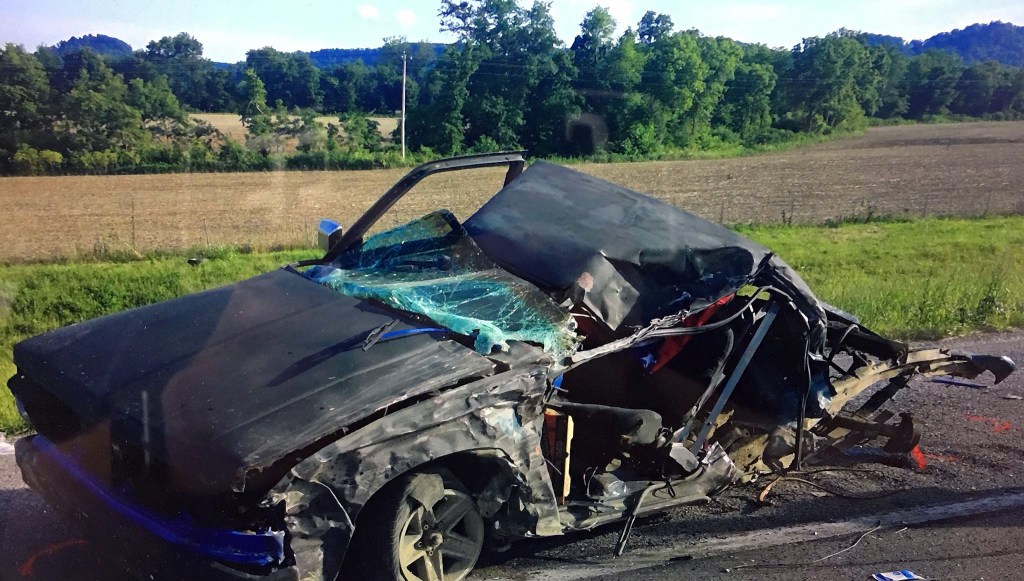 Photo courtesy of Lincoln County Sheriff’s Office A collision claimed the life of one man and injured two others Saturday in Lincoln County.

CRAB ORCHARD – A man was killed and two others were injured in a collision Saturday on U.S. 150 near Crab Orchard.

Brandon Scott Smith, 25, of Danville, was pronounced dead at the scene at about 7:10 p.m. by Lincoln County Coroner Farris Marcum.

Marcum said Smith, along with two female passengers, Alicia Wilson and her daughter, Ashley Wilson, were traveling eastbound on U.S. 150 in a 1993 GMC pickup truck when Smith crossed over the center line and struck a 2004 Ford F250 pickup truck in the westbound lane near the intersection of U.S. 150 and KY 39.

The collision occurred at about 6:20 p.m., Marcum said. The driver and passengers in the Ford pickup truck were uninjured, he said.

“There was actually an extra lane, like a passing lane, so he (Smith) actually went over an extra lane of traffic when he went into the (other) lane and struck the vehicle,” Marcum said.

Smith and the two passengers were ejected from the vehicle. Alicia and Ashley Wilson were both airlifted to the University of Kentucky Chandler Medical Center. Their conditions were unknown Monday evening.

Toxicology results on Smith are pending at this time, Marcum said, and are expected to be completed in a few weeks.

Marcum said Smith and the two female passengers had stopped by his mother’s house in Danville, where the family was hosting a baby shower, a little before 6 p.m.

Smith and the pair left Danville and stopped in Stanford to get pizza before heading toward Crab Orchard, Marcum said.

“They had been camping the night before and they were going to go camping again,” Marcum said. “His (Smith’s) brother saw him, I’d say, 45 minutes prior to his accident … he said he appeared to be fine. They’re still puzzled why he crossed over the center line.”