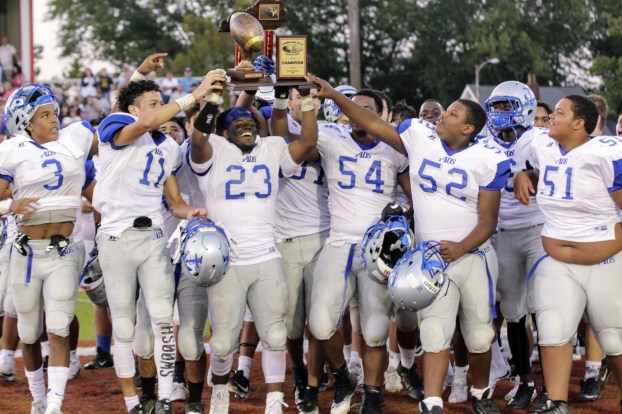 CORBIN — It wasn’t the prettiest win you will ever see, but Danville made all the plays — both offensively and defensively — to survive and easily defeat Knox Central 52-28 Saturday in the Cumberland Falls Classic at Corbin.

The Admirals defense forced eight turnovers — six fumbles and two interceptions — and returned three of the miscues into touchdowns as Danville (2-0) turned a close contest after one quarter into a rout.

Don Harris, who led the Ads in rushing with 75 yards on nine attempts, had gains of 11 and 20 yards during the drive while D’Mauriae VanCleave added nine and Zach Thornton seven. Harris scored from 20 yards out and Tres Walker added the point after to give the Ads a 7-0 lead with 8:51 to play in the first quarter.

However, just as they did in last week’s win over Frederick Douglas, Danville struggled to put more points on the board after blowing two excellent chances the rest of the period.

Junior Nathan Hazlett had a 25 yard field goal attempt partially blocked after Christian Hill had recovered the first of four fumble recoveries in the half. After a fumble recovery at the Knox 18 two plays later, Thornton’s pass was intercepted and returned to the Panthers’ 49.

Knox quarterback completed a screen pass to Dane Imel for 48 yards on the first play following the interception and  Ethan Mills scored from three yards out on the next play. Nick Martin tacked on the PAT to knot the score at 7-7 as the period ended.

While the offense was struggling to put points on the board, the defense decided to take matters in its own hands during the second stanza.

After Hazlett drilled a 25 yard field goal to give the Ads a 10-7 lead with 5:41 to play in the half, the defense forced fumbles on the next two possessions and scored each time.

First, James Patton stripped the ball from Campbell on the second play following the field goal and Chase Tandy scooped the ball up and ran 16 yards for the touchdown. Then, two plays later, Campbell was hit again and Darrian Bell recovered and ran 15 yards for another score. Walker added both extra points and Danville turned a 7-7 tie into a 24-7 lead in a matter of 75 seconds.

“The defense played well again,” Clevenger said. “We were able to force turnovers and turn them into points and that’s always a good thing.”

“We have to get a little tougher at the points of impact, though. (Knox) was able to get some good push on us when they went into their power set, but other than that I was pleased. Anytime you can put points on the board while on defense it can give your team a boost.”

Following the second fumble recovery for a score, Knox closed the half with a nice nine play, 80 yard drive that ended with a pair of 22-yard pass receptions. Campbell was on the receiving end of an end-around pass from Brady Worley and then completed a 22-yard pass to Devin Arthur for the score just before the half ended to trim the lead to 24-14 at the intermission.

Danville added three scores in the third period to put the game out of reach.

Thornton, who was named the Most Valuable Player of the game, completed a 13-yard pass in the back of the end zone to Tanner Ford, and had a nifty 37-yard touchdown run down the sideline while weaving in and around defenders. Ford completed the scoring in the quarter when he returned an interception 45 yards for a score and Danville carried a 45-14 advantage into the fourth quarter.

“I told them at halftime that they weren’t real focused from the pre-game meal on and we needed to attack them,” Clevenger said. “They received to begin the second half and we scored immediately to put more pressure on them. I told them that hopefully we could use that first half as a learning experience. We played much better the second half. We moved the ball like we were supposed to.”

Knox would score twice in the fourth period and Danville scored its final touchdown of the night on a beautiful 64-yard pass from Thornton to Jaleel Warren.

“I thought he threw the ball as well in pre game as he had all year,” Clevenger said. “There is a lot of pressure on him playing that position. The good thing is he doesn’t have to shoulder everything on the field. We have a lot of other weapons on the field. We have to do a better job up front for him, too. We’re not holding our blocks the way I would like for them to. With experience, however, Zach will gain confidence with each game.

The Admirals are off to a great start. Danville football will look to build on its 36-0 victory last week... read more