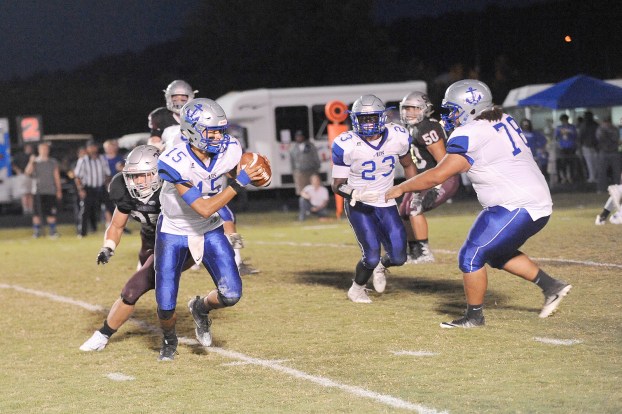 For the third time this season, the Admirals scored on their opening possession but this time, instead of stalling out the rest of the period offensively, they put the petal to the metal and coasted from there.

The Admirals (4-0) scored on three of their first four possessions of the game to put Pulaski in an early hole and never let up.

“We made plays early, then I thought we had the opportunity to put the game away in the second half and didn’t take advantage of it,” Danville coach Clay Clevenger said. “I thought we came out in the first half and were as sharp as we have been all year. Then, we came out in the second half and didn’t finish drives. Until we do that we won’t be able to put teams away. That is a learning experience and we’ll get better.”

The Admirals once again took the opening kickoff and promptly went 57 yards in seven plays to score while using just 2:23 off the clock in doing so. Don Harris, who led the Ads in rushing with 87 yards on 18 attempts, rambled for 21 yards on the opening play of the game and D’Mauriae VanCleave, who led Danville in receiving with 108 yards on eight catches, went 26 yards on a pass from junior quarterback Zach Thornton on the next play.

The drive would later stall and Nathan Hazlett was poised to attempt a 25-yard field goal, but Pulaski jumped offsides to give Danville a 4th and one situation at the Pulaski one yard line and Harris scored on the next play, Tres Walker tacked on the extra point conversion giving the Ads a 7-0 lead with 9:37 to play in the first period.

This time the Ads went 59 yards in just five plays and were once again aided by a Pulaski offsides penalty. Thornton and VanCleave connected for 17 yards to the Maroons’ 28 and the same combination resulted in a 28 yard touchdown completion on the next play for a 14-0 lead with 4:48 to play.

Bell stopped Pulaski’s next possession with his first interception of the night, but the Maroons got the ball back two plays later when freshman Ian Ware intercepted Thornton’s pass at the Ad’s 24.

Pulaski then used its most impressive drive of the night to cut the lead in half. They went 76 yards in 15 plays and used 5:01 off the clock in doing so. Catches of 14 yards by Grant Oaks, 10 yards to freshman running back Tristan Cox, who led the Maroons’ with 79 yards on 23 carries, and 20 yards to Jake Sloan, who had 137 yards on 10 catches, placed the ball at the three and Cox scored from there to trim the lead to 14-7 as the second quarter began.

Danville, however, not only scored quickly following the Pulaski score but tacked on another score to close the half.

It took just five plays for Thornton, who completed 18 of 26 passes and three scores, connected with Jaleel Warren for a 35 yard score over the middle and, following Bell’s second interception of the half, the same combination connected again for a 14 yard score and the Admirals led 27-7 at the intermission.

Turnovers littered the field for both teams in the second half and both teams had problems putting points on the scoreboard.

Christian Hill stripped Cox of the ball on the Maroons’ opening drive of the second half and Chase Handy recovered at the Danville 45.

The Ads, however, had a potential big gain nullified by an illegal man downfield penalty and their drive stalled at the Pulaski 28. The Ads would recover another fumble late in the half but their drive would stall after Thornton couldn’t handle a high snap from center and lost 19 yards to turn the ball over the Pulaski.

Pulaski cut into the Danville lead with 5:02 to play in the game when Cox scored from four yards out to trim the lead to 27-13, then the Maroons’ received a huge break on the next series when Walker couldn’t control a low snap from center on a punt attempt and Pulaski recovered at the Ads’ 6.

Danville’s defense rose to the challenge, though, as four plays resulted in a negative two yards and the Ads took over at their own eight with 2:42 to play.

“We kept battling them and got some key stops late in the game when they had a short field,” Clevenger said. “To the kids credit, they made the plays when they had to.”

Danville then put the game away by going the 92 yards, all on the ground, and scored when VanCleave raced around the right side virtually untouched 54 yards for the score.

It was the best passing game of the season for Thornton and he had three receivers (Warren, VanCleave and David Walker) with at least 40 receiving yards.

“We have kids that can catch the ball, but we have to put it all together,” Clevenger added. “There were times we didn’t protect (Zach) as much as we could have and then there were other times that Zach has to trust them and throw the ball on time and not be so quick to pull it down and run with it. We’re still a work in progress on that part and we will get better and better. I thought we got better tonight. We just have to finish drives and start putting teams away.”

At halftime, Danville and Mercer County were tied 1-1. The Admirals finished on top, 6-4. In an extraordinary second half... read more