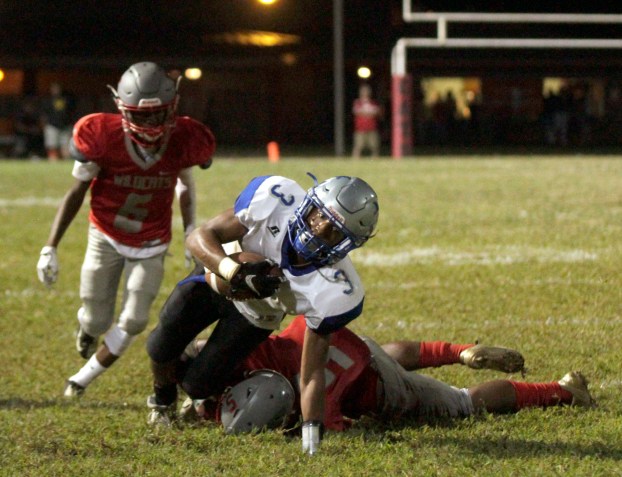 Waggener’s Division-I prospect Jairus Brents (Ohio State, USC, Oklahoma, Kentucky and Louisville among others are on his short list) accounted for 359 total yards (161 rushing, 198 passing) showed more team speed that Danville had seen in many years.

Danville, playing without team leader Christian Hill — who broke his thumb earlier in the week and did not play— showed the desire and made defensive stops when needed.

With the score tied at 21 just before the half, Brents escaped seven would-be tacklers at midfield like Houdini, reversed his field and raced 37 yards only to be taken down by D’Mauriae VanCleave at the Ads’ 10-yard line. The play prevented a touchdown and left Waggener with a 26-yard field from Jake Reiber instead of the touchdown, and the Wildcats led only 24-21 at the half.

Then, leading 31-28 late in the third quarter, the Wildcats went for broke on fourth down and one at their own 19. Brents ran into the left side of the Ads’ defense and had his only negative play of the game — a one yard loss — and Danville took over on downs. Two plays later, Don Harris, who led the Ads with 125 yards rushing on 25 attempts and three scores, ran it in from seven yards out to give Danville a 35-31 lead. 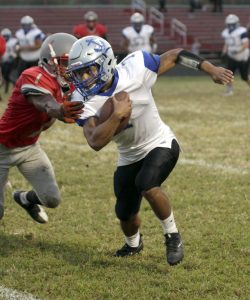 “We knew going in that they had good team speed,” Danville coach Clay Clevenger said. “I don’t think the team trusted the coaches when I tried to tell team that. I told the kids at halftime that they were lackluster and they thought coming into the game that they were just going to run away with them because of their 1-3 record. You could tell on film that they are getting better, though. They played a very good Eastern team very well last week.”

It didn’t take long to wake the Ads up. Waggener used just less than three minutes to score. After an outstanding kickoff return of 51 yards to the Danville 23, and following a chop block penalty, the Wildcats (1-4) went the distance in just three plays and scored when Brents, who was not known for his passing but completed 6-of-9 passes for 198 yards, three touchdowns and an interception. He connected with a wide open Alijah Sickles for a 26-yard score and Waggener grabbed a quick 7-0 lead.

Danville, however, would score on each of its first two possessions to take the lead.

First, the Ads went 70 yards in just eight plays to score. The key plays in the drive were a 21-yard pass to VanCleave, who led the Ads with 119 yards on seven catches, and 35-yard run by Harris. Harris capped the drive on a one-yard run and Tres Walker would add the first of seven straight PAT’s to knot the score at 7-7.

Three plays after a Tanner Ford interception gave Danville the ball at the Waggener 48, the Ads would score when Thornton connected with a wide open VanCleave on a hitch-and-go route for a 14-7 lead.

The lead, however, was short lived.

Taking over on their own 20 and aided by a Danville facemask penalty, Brents ran for nine yards to the 48, and Brandon Jones, who gained 120 yards on 16 tries, ran untouched through the middle of Danville’s defense on the next play for a 52-yard score and a 14-14 tie after one quarter.

“(Jones) ran hard on film and I was impressed by him,” Clevenger said. “(Waggener) was a team that you could tell was getting better each week.” 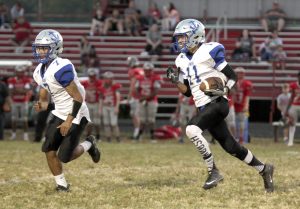 Waggener regained the lead when Brents’ pass to Cody Porter had Danville defensive back Isaiah Miller turn the wrong way, and it turned into a 35 yard touchdown and 21-14 Wildcats’ lead.

Danville would knot the score at 21-21 after an incredible 21-yard one-handed catch by Jaleel Warren kept the drive alive at the Wildcats’ 13. Two plays later, Thornton connected with David Walker for a 10-yard touchdown.

That set the stage for the first of two game-saving plays by the Ads’ defense.

Brents looked destined to score after a remarkable 37 yard run, only to see VanCleave come nowhere to make a touchdown-saving tackle at the Ads’10 with :03 to play in the half. Waggener had to settle for a 26 yard field from Reiber and a 24-21 lead.

Danville would use 10 plays to score on its opening drive of the second half. Thornton scored on a three-yard keeper but Waggener would answer in just two plays to regain the lead. Brents ran for 55 yards on the opening play, and then Jones would score untouched from 15 yards out on the next play to give the Wildcats a 31-28 advantage with 6:51 to play in the third period.

Things began to get better for the Ads despite not gaining a first down on its next series. Thornton’s 32 yard quick kick pinned the Wildcats back on its 10 yard line, and Waggener was faced with fourth and one situation at its own 19. Danville’s defense then rose to the occasion and dropped Brents for a one yard loss and the Ads took over on the 18. Harris would score his second touchdown of the night two plays later from seven yards out giving Danville a 35-31 lead entering the fourth quarter.

Warren would score on a 23 yard catch and Harris scored his third touchdown from nine yards, but Waggener would answer on a 10 yard Brents run and 68 yard Hail Mary pass to Sickles to trim the lead the 49-46 with 1:04 to play. Once again, Miller was in position on the Hail Mary and batted the ball away, only to see Sickles catch the batted ball and score.

Waggener would attempt an onsides kick to get the ball back, but the kick would go only four yards to seal the win. 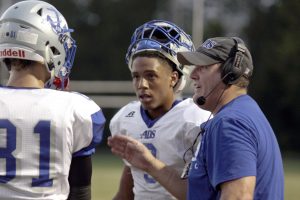 Danville boys showed why they’re one of the most prolific offenses in the 12th Region on Thursday in Frankfort. The... read more