HARRIMAN, Tenn. — A Lincoln County man is behind bars in Tennessee after allegedly holding up a CVS pharmacy on Tuesday.

William Hagan Folger, 31, was arrested Jan 2. and charged with aggravated robbery and possession of drug paraphernalia, according to a press release from the Harriman Police Department.

Officers were dispatched to the CVS Pharmacy at about 12:38 p.m. for a reported armed robbery but when they arrived, Folger had already fled the area, according to the release.

Folger allegedly entered the store wearing a dark knit cap and sunglasses, walked back to the pharmacy and handed the pharmacist a note demanding a “large amount of Oxycodone” while displaying a pistol.

“The pharmacist complied by handing over a box of Oxycodone and the suspect left the store,” the release states.

After a description of Folger and his vehicle were shared with other local law enforcement, he was identified by Roane County Sheriff’s Investigators as he drove past them on Highway 70 in the Midtown Area of Harriman.

Folger was detained without incident and turned over to the Harriman Police Department.

“Investigators found evidence of the robbery in and around the suspect vehicle being driven by William Folger, (a 31-year-old from Kentucky who recently moved to Harriman last month) including but not limited to the clothing the suspect was wearing in the video (surveillance),” the release states. 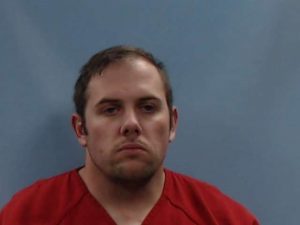