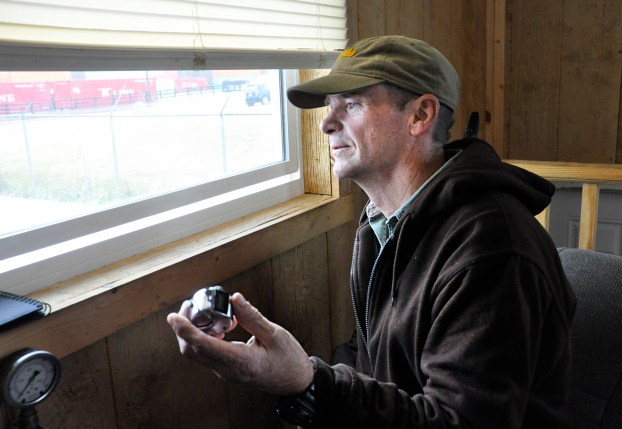 Cliff Black has been the operator of the Gose Pike Convenience center in Boyle County for 17 years. Black keeps a ticker tally counter in hand to keep track of the number of vehicles coming into the center.

One Day a few weeks ago, a lady called the Gose Pike Convenience center asking if she could throw away a boat there.

Cliff Black chuckled and said that was one of the more unusual items somebody wanted to pitch out.

“But we might could have used it today,” he said recently, as he peered out the window of his “watch tower” office at the convenience center as the rain fell.

Black’s most unusual find could be his former high school sweetheart. She came by the convenience center to throw away something and rediscovered Black instead. They picked up right where they left off and have been married about seven years now. 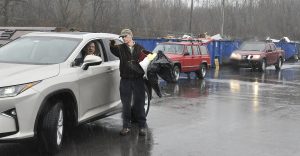 While standing in the rain holding trash that can’t be recycled, Black points George Scott in the direction of where he can unload useless computers and accessories.

Being a Gose Pike convenience center operator for 17 years, Black has seen a lot of Boyle County’s garbage and has met many of its residents. Some come to the center to throw away a tiny bag of trash every day; some come once or twice a week; and others come whenever they need to discard larger stuff.

Black said the “regulars” who stop by and talk “keep me up with what’s going on and everything.”

Black has noticed more people than ever seem to be moving into Boyle County because of the increased amounts of packing paper and moving boxes being dropped off to be crushed or recycled.

He said many times, he’s one of the first locals to meet these new Boyle County residents. 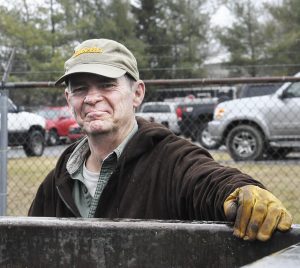 Black said he stays busy during his 10-hour shift Monday through Thursday. “I sweep up every little mess people make. I try to keep it cleaned up.”

He also helps unload refrigerators and other heavy appliances and furniture when an extra pair of hands is needed.

“And those mattresses can really be a bugger when they’re wet.”

Black also makes it a point to help older people unload their trash.

One time he wore a pedometer to count how many steps he took in one day. “Oh lord, the exercise — there’s no shortage of that. One day I walked seven miles,” working at the convenience center, he said. 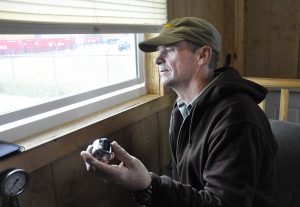 Cliff Black has been the operator of the Gose Pike Convenience center in Boyle County for 17 years. Black keeps a ticker tally counter in hand to keep track of the number of vehicles coming into the center.

People don’t realize just how busy the Gose Pike Convenience Center is every day. The center opens at 7 a.m. and on a recent rainy Thursday morning, there were 40 people who had already dropped off trash. Normally, there would have been more than 60, Black said.

He knows this because he keeps a small clicker tally counter in one hand to keep track of the vehicles using the center. It’s normal to have more than 200 vehicles on weekdays and 400-500 people vehicles unloading trash on the weekends.

Convenience center operators encourage folks to separate their garbage and put it in appropriate recycling bins. But some of them get a little “huffy” and say their trash belongs to them so they can get rid of it any way they want and just throw it in the compactor, Black said. 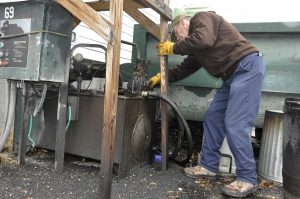 All convenience centers in Boyle County are only for local residents’ use. Sometimes when non-residents try to discard their trash here, Black said he “gets a lot of flack,” when he tells them to stop. “They give me a piece of their mind. It’s something you don’t want to print,” he said. “But on the whole, everybody is OK.”

Boyle County is on the “short list” for a $100 million manufacturing facility that would employ 275 people, according to... read more