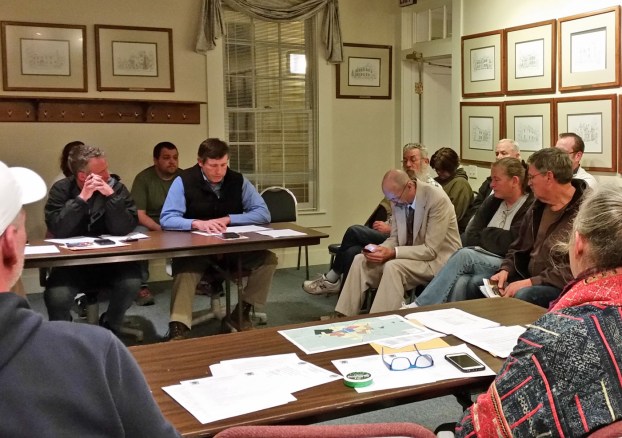 Kendra Peek/kendra.peek@amnews.com Tim Simpson reads the words of a cancer patient regarding what medical marijuana would mean, after sharing about his personal struggle with multiple sclerosis.

Simpson said he was diagnosed with multiple sclerosis about 10 years ago, but hasn’t shared it publicly until more recently. His mother has the same disease, along with lupus.

“I would wake up screaming at night,” Simpson said. “You feel like it’s electricity going through you. Other people should be able to (use medical marijuana) too, without breaking the law.”

Simpson said Maysville City Commission, Bullitt County Fiscal Court, Lexington-Fayette Urban County Council and the Louisville-Metro Council are some of the agencies that have passed resolutions of support, too. The resolution states support for House Bill 166, which would legalize medical marijuana in Kentucky.

Simpson and a group of supporters failed to convince the Boyle County Fiscal Court to vote in favor of the resolution on Tuesday.

The support of Louisville-Metro helped House Bill 166 gain support; it is to be brought before committee in Frankfort on Wednesday, Simpson said.

He said he is part of several groups trying to generate support for the bill, including Kentuckians for Medicinal Marijuana.

Others spoke in support of legalizing medical marijuana as well, sharing their personal stories with diseases like multiple sclerosis and cancer, urging the council to approve the resolution.

“I think enough of us have known people with cancer, that we think it would be very beneficial to them,” council member Clay said.

Mayor Anne Sleet asked the council if they want to approve the resolution or wait until after the bill moved forward at the state level.

Bailey said, “Waiting would be no benefit,” because the support from cities and counties now to move it forward is what’s needed.

After Clay made the motion approving the resolution, there was a 15-second pause and it appeared the motion might die for lack of second. But Bailey then seconded the motion.

Caldwell said he was “all for medical marijuana,” but he was concerned about people who might abuse the system. That’s the reason for his “no” vote, he said.

“I’ve seen what drugs can do to families,” he said. 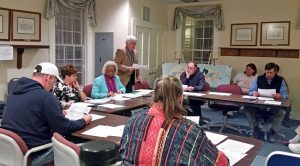 The council also formally adopted a resolution opposing a plan from Kinder Morgan to repurpose a natural gas pipeline. The action came following a presentation from Tom Ellis, a Boyle County resident who is opposed to the plan.

“This is one of the most volatile products on the planet,” Ellis said of natural gas liquids, the product Kinder Morgan has proposed using the pipeline to transport.

Ellis said the age of the existing natural gas pipeline, the rockiness of the soil around the pipeline and the depth the pipeline is buried at all make it dangerous to repurpose the pipeline for heavier, toxic and more explosive NGLs.

“I’m so frustrated with the feds,” Ellis said, when asked how the federal government was “OK” with the project.

“If ever there were a spill, it could spew 900,000 gallons of toxic NGLs to the creeks, to the rivers, to the farmland, and it would kill Herrington Lake for generations to come,” Ellis said. “We have to get the public rising above this.”

Clay said, “I’m OK with being an impediment to (the project).”

The council also approved purchasing $44,711 in equipment for the Perryville Fire Department, using $21,211 of city funds, $20,300 in Homeland Security grant funds and $3,200 in state aid funding from the Kentucky Fire Commission.

Full texts of complaint against Danville school board, attorney’s response

On Feb. 26, a group of 108 “concerned staff and citizens” delivered a seven-page letter of complaints to the Danville... read more