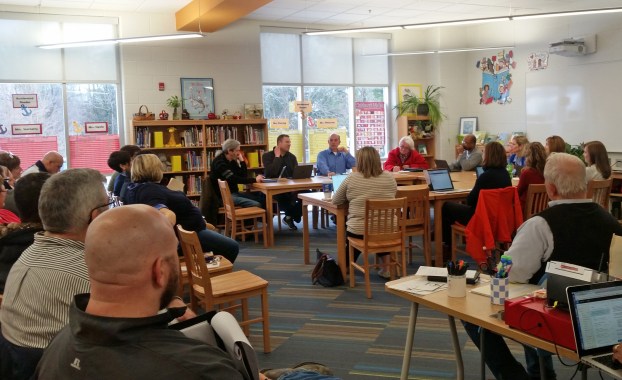 Kendra Peek/kendra.peek@amnews.com Danville Board of Education discussed keeping kids at Jennie Rogers Elementary for one year while Hogsett undergoes renovations.

Doing it this way provides a “significant cost savings,” said Superintendent Keith Look as he presented the options to the board during Monday’s working session.

“It will be cramped. It will be very cramped, but it will only be one year,” Look said.

Brian Gover, director of Technology and chief information officer for the district, said they have “mapped the building.”

“Every teacher will have their own classroom,” he said. The cramped feeling, Gover said, might be felt by administrators more than students, explaining that adults in the building might not have the traditional office they were used to.

Board members agreed with that plan.

“We didn’t want the sounds of construction to impact learning,” said board member Susan Matherly.

Gover pointed out that there were wings at Toliver and separations by floors, while that was not possible at Hogsett. If students were to be shuffled while construction was ongoing there, it would only be by a few classrooms, he said.

Staff would also be together for the year, which Matherly said would help to build the team more than if they were to put the young children at two separate schools, another idea that had been rumored.

Board member Lori Finke also said it would ensure the safety of students.

The plan, which board members approved, will keep the Danville Schools Central Office at its current location on the campus of the Kentucky School for the Deaf for one more year.

Ultimately, the central office will move to Jennie Rogers, once students have been moved to Hogsett, in time for the 2019-2020 school year.

The board heard from Chair Paige Matthews regarding her appointment of board member Troy McCowan to the superintendent search committee.

The board also approved adding a professional development day on April 2, the first day of spring break, but did not make a decision relating to Monday’s snow day.

About 100 girls will benefit from The Prom Project

A senior at Boyle County High School is working with other adult volunteers to make prom a magical evening for... read more