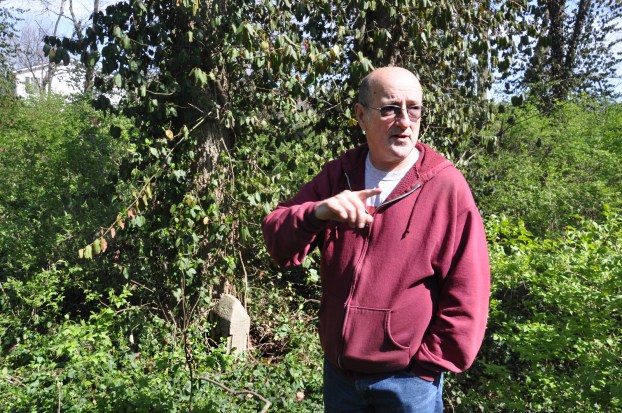 A historic African-American cemetery tucked away between two private properties within Danville city limits is once again being cleaned up by a group of concerned citizens. This time, they hope their efforts to preserve it can be sustained, even though the cemetery’s ownership is in question. 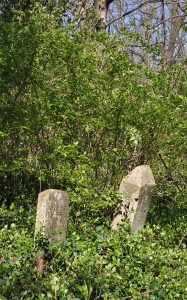 Michael Denis, secretary of the Central Kentucky African-American Cemetery Association, said the organization wants to preserve the site, which is hidden next to Raymond Kilby’s property at the end of Kilby Lane, by clearing it and finding a way to keep the cemetery properly maintained, either by the city or through private grants.

Denis said he would love for Danville to take ownership of the cemetery, “but the legal issues and everything that has spiraled around that cemetery for 25 years mean that it’s not being maintained.”

One of the issues also involves the road leading to the cemetery, Kilby Lane, which was once called Meadow Lane: Is it a public or private road?

Denis said, “We are trying to work around those issues. We don’t want to get into a hissy fit match between the Kilbys and the city. We just want the cemetery preserved.”

On March 31, Denis, along with several other cemetery association members, met with Kilby in the cemetery and talked about the history of the site and an upcoming cleanup project.

“After meeting with Mr. Kilby, we were all very encouraged about the possibility of getting in there and cleaning it up and to continue cleaning it up, because that’s the main issue.” 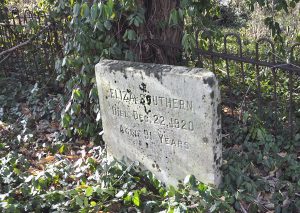 The large grave marker for Eliza Southern, who died in 1920, is placed within an iron fenced area at Meadow Lane Cemetery.

Denis said he recently went before Danville’s Cemetery Committee. “They were very gracious to us, but basically said that unless the City of Danville can find out who owns the cemetery, they’re not about to do anything about it in maintaining it … I can understand that. If they don’t own it, then why should they maintain it?” Denis said.

Denis has checked with property valuation administrators in Boyle and Lincoln counties and they have never seen a deed to a historic African-American cemetery, he said.

The two-part plan involves the association being granted a quit claim deed from the county, and then obtaining non-profit status, in order to apply for grants to maintain the cemetery in the future. 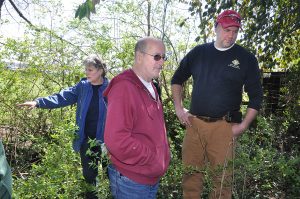 Michael Denis, center, looks at a grave marker with Raymond Kilby, in Meadow Lane Cemetery as Cindy Peck, left, points to an area to be cleaned out on April 21. Kilby owns property adjoining the cemetery on three sides but doesn’t have the deed to the cemetery.

To request the quit claim deed, the association must contact the abutting property owners and ask if they are interested in or have a claim to the property on which the cemetery is located. If they don’t, the group will then ask the court to grant them a quit claim deed.

In the meantime, Denis said he is continuing to research and follow leads about who owned the land when the cemetery was established. The oldest marked gravestone is from 1787, he said.

For now, about seven members of the cemetery association, along with 80 sisters in the Tri Delta sorority at Centre College, are planning to tackle the overgrown jungle at the half-acre plot on April 21.

It’s not the first time volunteers have tried to tame the cemetery. 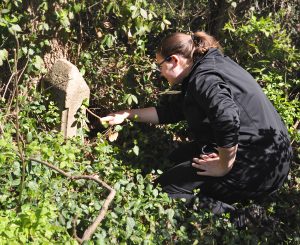 CKAACA member Amanda Iocono, a Centre College student who’s Tri Delta sorority will be cleaning the cemetery for its service project on April 21, tries to read the name on a grave stone in Meadow Lane Cemetery.

Denis said Meadow Lane Cemetery was cleaned up four years ago. Other volunteers have sporadically cut out wild brush every few years since 1992.

This time, they’re planning to take out all of the overgrown brush and vines, right down to the earth, Denis said. This will allow them to possibly find more head stones, and definitely more grave markers and dips in the ground where graves are likely located.

“We are getting old,” Denis said. Cemetery association members do most of the physical work and occasionally find groups of volunteers to help them, but the members range in age 64 to about 78. 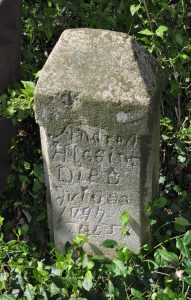 “We’re getting to the point where we physically won’t be able to do the work much longer, so it’s important to come up with enough grants or donations so we can hire work out. Even clean up or mow it four times a year — that would take care of it,” Denis said. “It’s important to me to preserve any cemetery. Cemeteries reflect our past. The way we care for our cemeteries reflects the respect we show to the past.”

One Day: Nancy Brown, Produce manager at Save a Lot