Jeanne Lane’s daughter, others work to hold Kentucky writers celebration in wake of her death 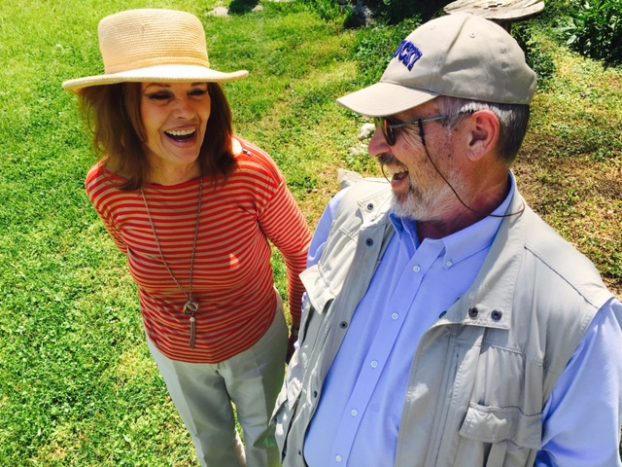 File photo by Bobbie Curd Jeanne Penn Lane and friend Paul Stansbury have a laugh during a past Kentucky Writers Day celebration at Penn's Store. The event will go forward this year in June, as a memorial to Lane, who passed away in Feburary.

Although Kentucky Writers’ Day is officially celebrated in April at the capital, Penn’s Store will have a special commemoration event next weekend. And the daughter of the local event’s creator, Dawn Osborn, has gone to great lengths to make her mom proud.

Jeanne Penn Lane died in February — an untimely death to many as she stayed prideful and quiet about an illness she’d been battling. Lane is known to many as a fireball of energy. She spent most of her life involved in arts of all genres, including music and painting. She is also known as someone who faithfully promoted Kentucky writers of all genres. Years ago, she decided to jump on the state-wide event known as Kentucky Writers’ Day, which is celebrated at the capital in Frankfort and involves the state’s Poet Laureate.

Lane organized readings to be held at Boyle County Public Library, musical showcases at different evening venues and a Sunday event at Historic Penn’s Store in Gravel Switch, which Lane has operated in her family for years.

The event has been held in conjunction with the state celebration, but since Osborn jumped in on the planning, she decided to change it up this year to honor her mother. 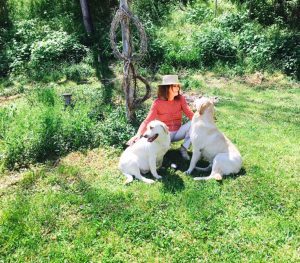 Jeanne Lane Penn during a past Kentucky Writers Day celebration takes a moment to hang out with her two prized labradors, Bo and Girly Girl. Bo was recently killed.

The local annual celebration will now be known as the Jeanne Penn Lane Celebration of Kentucky Writers. On Saturday, June 23, the library will host about 16 different writers from all genres, highlighting those with a Kentucky connection. They will read from their work as well as have books on-hand for sale.

Paul Stansbury, a friend who helped Lane organize the event for years, says while certain writers are invited to participate in the Saturday library event, it is opened up to all writers with a Kentucky connection who would like to read their work. He says there will also be space for book sales from additional authors.

A new part of the event will include an exhibit of Lane’s artwork in the Mahan Gallery of the library, beginning on Wednesday, June 20.

On the evening of June 23, songwriters will peform original works and pay tribute to other songwriters from 6 p.m. to closing at Casa Grande Restaurant in Harrodsburg, for what organizers term its “sister event,” the Kentucky Songwriters Showcase. 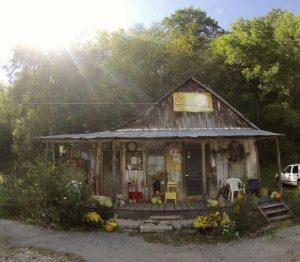 The Songwriters Showcase will highlight multiple songwriters and musicians paying tribute to Kentucky songwriters, or songwriters with a Kentucky connection. Included this year will be Barry Morrison and Donnie Winters of Nashville (Americana), Lee Dixon of Los Angles (jazz, blues), To Be Determined of Lexington (alternative rock), Larry Sanders and Borderline of Harrodsburg/Burgin (classic country), Tony Cooper of Liberty (country), Jon Nesbitt of Lebanon (rock), Joe Crafa of Perryville (easy listening) and other special guests.

The songwriters’ event will be set up under the restaurant’s covered patio, which seats about 80 people.

Then, a memorial will be held Sunday, June 24, at Penn’s Store. Selected presentations will be held at the store’s grounds, including an open mic and songwriters’ jam to conclude the day.

Osborn, Lane’s daughter, says things have always been challenging at Penn’s Store. The family has always worked together to keep the historic store running, and with her mother’s absence, things have gotten a bit tougher.

“Shortly after my mother’s death, we had a series of days of vandalism in the hay fields in front of the store,” Osborn says. She called authorities, but was told unless the person was caught in the act, there was not much that could be done.

Then, Bo, one of Lane’s prized yellow labradors, was run over and killed at the store. Not long after that, the red antique school chairs that sat on the store’s porch for decades were stolen. 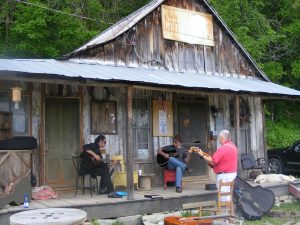 “The chairs weren’t valuable to anyone but me — my mother loved those chairs,” Osborn says. “In fact, the last task she was able to do before she got too sick to do anything else was give a fresh coat of red paint to those chairs, right before the Outhouse Blowout last fall, so they would look nice for the event.” Osborn pulled up an old photograph of the chairs and posted it to Facebook, pleading that if they were returned, no questions would be asked.

Just this week, Osborn went down to feed the cats at the store, and saw that the Penn’s Store Road sign had once again been stolen, and trash had been dumped at the pull off at the bridge as you go over to the store.

Osborn says honestly, sometimes she just sighs and wonders why she even tries.

“But I think about my grandmother and my mother, and all the great women before me — none of them would have ever let anyone know how hard it was. It’s that ‘never let them see sweat’ type of thing,” Osborn says. “And, perhaps that’s the key to holding on to this place.”

The Jeanne Penn Lane Celebration of Kentucky Writers will be held Saturday and Sunday, June 23-24. On Saturday, writers with Kentucky connections will be reading excerpts from their work as well as selling books from 10 a.m.-4 p.m. at the Boyle County Public Library. Anyone interested in participating by reading their work or setting up a table to sell needs to email Paul Stansbury at ky.writers.celebration@gmail.com.