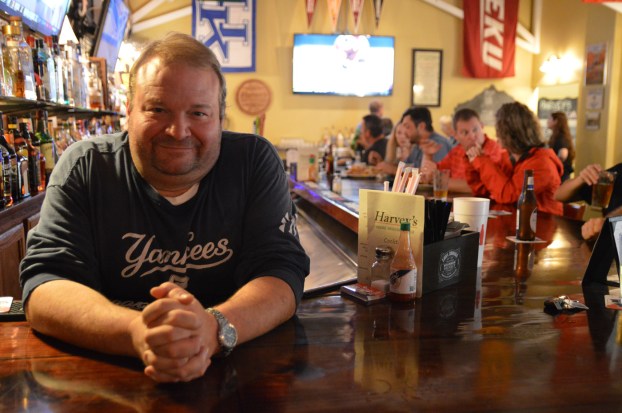 Bobbie Curd/bobbie.curd@amnews.com Alex McCrosky is the owner of Harvey’s restaurant, along with his wife AnnYager.

Never a normal day: McCrosky says most would be surprised what goes into ‘restauranteering’

Anyone who’s met Alex McCrosky would agree: He never meets a stranger. You can find him any given day up front of Harvey’s, the restaurant he and wife AnnYager conspired together to create, running around — always with sweaty temples, and always with a smile.

He’s not only the frontman, talking to guests constantly to find out what they do and don’t want; he’s the behind-the-scenes guy, too. Alex says when you decide to open a restaurant, nobody tells you about the floor-mopping, dish-washing and toilet-plunging responsibilities that fall to owners.

Alex said there is no such thing as an “average” day as a restauranteur; he said a brief interview with the paper was the most minutes he’d sat in one spot all week long.

After an attempt to list each and every employee — there are at least 20 — by first and last name, their position and individual strengths to give them all a shout out, he wanted to make a few things clear.

“They are the ones running their butts off, cooking in that hot kitchen, serving customers and buying into what me and (AnnYager) have set out to do. We would’ve never gotten this far without them. They are the ones getting here to start food prep.”

“I don’t do that, I’m doing all the ‘fun’ stuff like this,” Alex says, as he grabs a thick insurance binder off the bar. He’s always talking to insurance companies. They’ve been researching all the hoops to jump through to begin delivering food — something they may or may not be able to swing due to insurance costs. 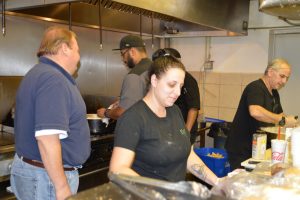 Bobbie Curd/bobbie.curd@amnews.com
Alex McCrosky, left, and some of his 20-plus employees work in the kitchen at Harvey’s.

His day normally starts about 7:30 each morning, when “Rivey wakes up” — their daughter, Mary Rives. He gets to Harvey’s around 9 a.m., while the others have been cutting and chopping for most of the morning, prepping for the lunch crowd.

“If we can’t get you in the door, your fanny in a seat with a plate of food in front of you in 20 minutes, giving you 20 minutes to eat and 20 minutes to do that one thing you have to do on your lunch hour, then we’re not doing our job.”

Alex may either be checking timesheets to get a jump on payroll — a feat with the number of employees — ordering supplies or making trips to get them, something he does several times a week.

Most of what they use is from local providers, at least as much as they possibly can, he says. There’s lots of building maintenance and multiple sets of paperwork to be dealt with daily. And he deals in a lot of wood and charcoal, since they smoke their own meat.

“I do a lot of expediting when it’s busy, setting trays for the servers if they get into the weeds,” but mostly he’s talking to people, or backing up the bar — and talking to people. He says he’s fortunate to be able to spend so much time with guests because he’s got such a strong staff; “They’re just fantastic at what they do.”

His wife is a huge part of why it succeeds too, he says. Without her, “This thing doesn’t work at all. She loves Danville so much and knows so much about it. We were very intent on making this a ‘Danville place,’ not a place that makes you feel like you’re in Lexington.”

Alex is from Mississippi, offers a small-town warmth and has a mantra that every opinion matters. He says his guests are the ones who have come up with some of their most popular specials, “so I’m always listening.”

He’s even had to kid-wrangle, once grabbing a 6-year-old who wandered into the kitchen. “He was only looking for his mamma. He was cute.”

He says families with children are patronizing the restaurant frequently, and even goes so far to say, “If kids sitting at the kid table, coloring and yelling across the room to their parents bother you, this might not be the right place for you.”

Involved in his PR work is customer satisfaction, most of which he is known to excel at. If someone isn’t happy, he generally defers to asking them how they’d like him to handle it. He educates many on the fattiness of brisket; par-cooking wings and how they can still be so juicy; and yelling at the game on TV with the regulars.

Alex goes to trade shows when he has time and always keeps his eyes open about what’s coming up next, including prep plans for their tentative new menu release coming up in spring. He’s dead-set to coexist with other downtown establishments, with the thinking that if one succeeds, they all succeed. He compliments Bluegrass Pizza and Pub on what they do and how they do it, and says “we hope to be as much of a standard in town as they are.”

The best part of his job: the people, he says. Sure, 20-plus employees takes a lot of management, but he has strong shift managers, a strong bar manager and an incredible head chef. They, along with the others, are the backbone; they bought in, he says.

Former Danville Police Officer Glenn Doan is now the assistant chief; he was pinned during a short ceremony at Monday’s... read more