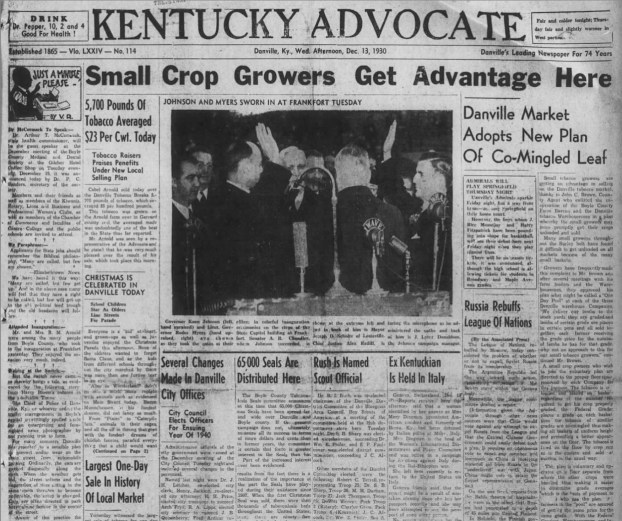 Advocate-Messenger archives The front page of the Kentucky Advocate on Dec. 13, 1939, featured a photo of Kentucky Gov. Keen Johnson being sworn in and news about record tobacco sales, among other things.

Brown was credited with developing a plan for tobacco farmers to “pool” their tobacco in larger lots, enabling more tobacco to be sold at better prices.

“Many small growers throughout the Burley Belt have found it difficult to get unloaded on all markets because of the many small baskets,” one article explained. “Growers have frequently made this complaint to Mr. Brown and after several meetings with his farm leaders and the warehousemen, they approved his plan what might be called a ‘one-day pool’ at each of the three Danville warehouse companies.”

Brown was quoted: “We deliver our lambs to the stockyards, they are graded and lambs of certain grade are placed in certain pens and all sold together, each farmer receiving the grade price for the number of lambs he has for that grade. Why not an approach to this for our small tobacco growers?” 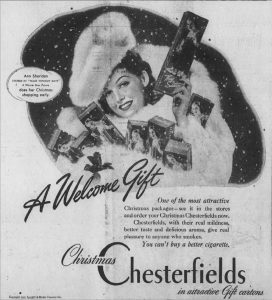 The plan clearly worked: “Yesterday witnessed the largest sale of tobacco for one day in the history of the local market, when a fraction over 600,000 pounds sold at an average between 16 and 17 cents per pound,” one article reads. “The large sale was made possible by the new scheme of selling co-ordinate or co-mingled crops, after they had been duly graded by the Federal Grading Crew, so the baskets ran from 350 to 500 pounds. This new scheme of selling was originated in the mind of John C. Brown, Boyle County’s alert farm agent, who is always looking out for better things for the farmers.

“The Farmers Tobacco Warehouse sold upwards of 200,000 pounds of the weed this morning at an approximate average of 17 cents per pound.”

Another story noted one batch of 5,700 pounds of tobacco was sold for $23 per 100 pounds, meaning 23 cents per pound: “This tobacco was grown on the Arnold farm over in Garrard County and the averaged made was undoubtedly one of the best in the state thus far reported.

“Mr. (Cabel) Arnold was seen by a representative of the Advocate and he stated that he was very much pleased over the result of his sale, which took place this morning.”

Also in the news

• The annual Danville Christmas Parade was held on Dec. 13, 1939, and the Advocate reported it was a roaring success. “None of the oldsters wanted to forget Santa Claus, and as the kids from different schools throughout the city marched by, there was more than one furtive tear in an eye.”

• In Lincoln County, Crab Orchard resident George Coldiron was being held in jail after allegedly killing another man with an axe. “Deputy Sheriff Ray Wilson of Crab Orchard said that Coldiron surrendered to him after he had killed (Charles) Brown with an axe in a woods on a farm on which Brown was a tenant. The slaying grew out of a dispute over Coldiron’s right to cut timber on the land.”

• A photo of Kentucky Governor Keen Johnson’s swearing in ceremony from the day before was featured four columns wide at the top of A1.

• A large five-column ad on A4 prompted readers to buy “Christmas Chesterfields” — cigarettes sold in “one of the most attractive Christmas packages.”