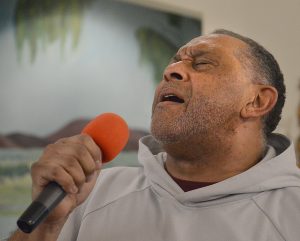 Photos by Robin Hart
Gary Johnson sings a solo with the First Baptist Church Mens Chorus as part of the celebration.

The celebration, in honor of what would have been King’s 90th birthday, began with gospel singing by the First Baptist Church Men’s Chorus and youth choir; a dance interpretation by the church’s SWAG (Soldiers Walking According to God) team; and a solo by Linda Tillman, accompanied on piano by Robert Trumbo.

The commemorative march was canceled due to the frigid temperatures and health concerns for the participants. However, NAACP chapter President Marvin Swann used the scheduled time to have Glenn Ball share his memories of hearing Dr. King preach at Zion Baptist Church in 1958 and meeting him afterward.

He also remembered how Dr. King “was inclusive and not exclusive,” when he was teaching groups of African-Americans and white Americans how to conduct themselves during protests for equal rights. “He taught us you do not fight back,” Ball remembered. “We must work together.”

Swann then invited the audience to get up and greet each other and introduce themselves to people they didn’t know.

He said it was important for everyone to have conversations, not just there, but to continue them every day.

Photos by Robin Hart Destiny Byrd, left and Samantha Swann, right, along with other members of First Baptist Church’s SWAG (Soliders Walking According to God) group perform a uplifting interpretive dance.
You Might Like

Boyle County firefighters were very busy Monday morning, dealing with two structure fires happened, one right after the other. The... read more