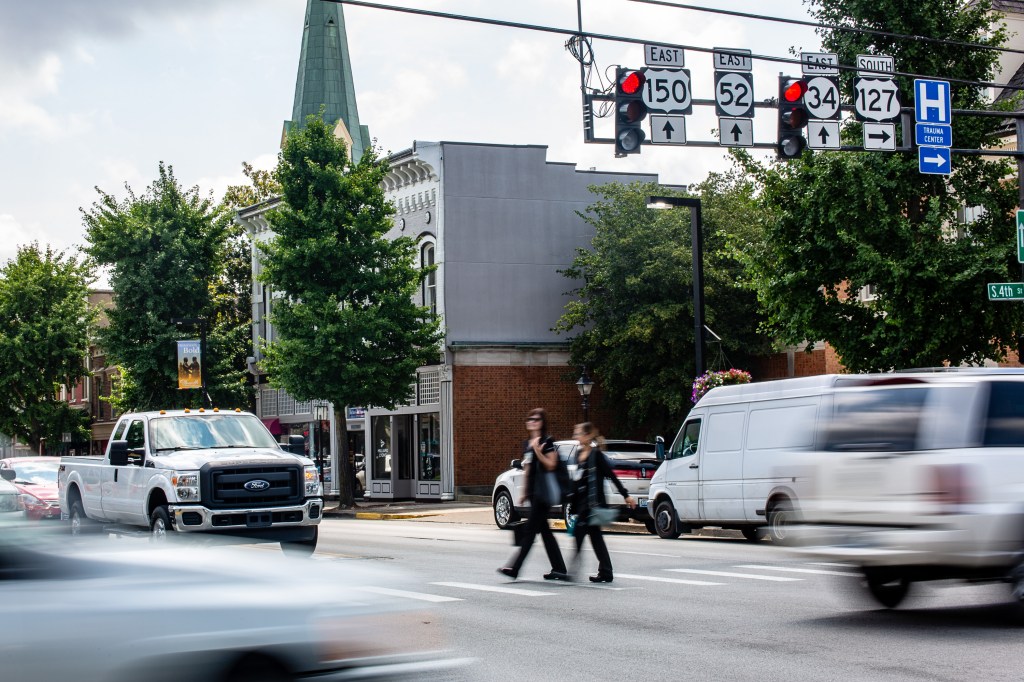 Pedestrians cross Main Street at the intersection with Fourth Street on Thursday. (Photo by Ben Kleppinger)

Danville’s Main Street is getting a lane reduction for six weeks beginning Aug. 1. It’s a temporary test that could result in a permanent change to traffic flow along one of Danville’s busiest roads if the state Transportation Cabinet likes what it sees and local officials don’t object.

The four-lane portion of Main Street between First and Fourth streets will be restriped for three lanes — one each direction and a center turning lane, according to a news release from the Transportation Cabinet.

The state will also add a “dedicated left-turn signal” at the Fourth Street intersection.

“The trial revision for striping and the signal system will be installed after Aug. 1. Temporary changes will be in effect for a period of six weeks,” according to the release. “The Department of Highways, District 7 Office, will hold a public meeting after a four-week trial period. The public meeting will serve as an opportunity to receive citizen feedback.”

The state “will utilize collected data and public input to evaluate the temporary changes,” according to the release. “Decisions will be made after the evaluation process is completed.”

Danville City Manager Ron Scott was informed of the state’s plan around 4 p.m. Wednesday, according to an email Scott sent to other city officials and staff.

“Following their evaluation of the results of that test period, the changes could be either made permanent or the earlier striping/signal arrangements could be reinstated,” Scott wrote. “Actual repaving of Main Street would follow the evaluation of results obtained during the test period.”

“Milling and resurfacing work will not begin until after the six-week trial period for the striping and signal changes,” according to the release.

Read more reactions from officials to the plan here.

The state awarded the contract for restriping and resurfacing to the Allen Company Inc. for $453,202.63.