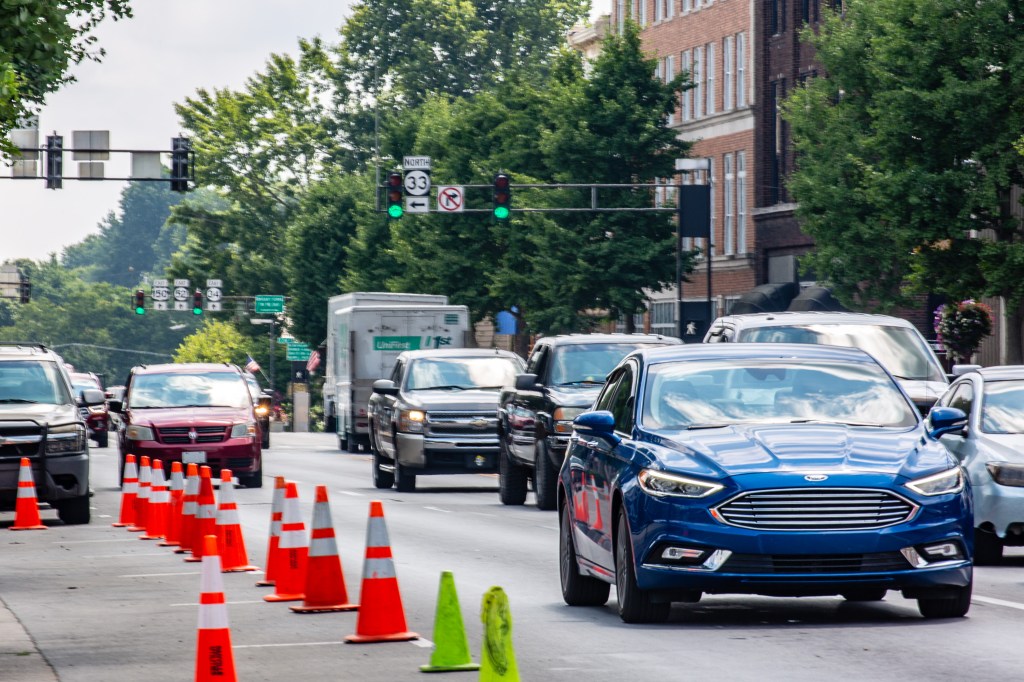 If state transportation officials want the support of local officials for a lane reduction on Danville’s Main Street, they still have some convincing to do.

“It ain’t going to be milk and honey,” said Mike Perros, Danville’s mayor. “The issue downtown is not number of lanes, it’s the speed of traffic. I have asked District 7 to provide us tools to help slow down that traffic. I have heard nothing along those lines.”

But there are vocal supporters of the lane reduction, as well. Boyle County Magistrate Jason Cullen is a business owner who operates the Hub Coffee Shop on Main Street. His business is one of those that could be affected by the change.

“I am extremely excited about this,” he said. “I have been waiting for this for years. I’m not happy that we’re technically wasting transportation dollars on this trial run.”

From plan to action

District 7 road officials met with Danville and Boyle County officials on May 14 to advise them they “had plans” to move forward with reducing the number of lanes on the main thoroughfare through downtown Danville, City Manager Ron Scott said.

“They still believe that traffic flow improvements can be made and safety can be improved by these proposed changes, and they had data to support those conclusions,” he said. “We talked about, ‘What if it doesn’t work? Or are you just imposing your design standards on a community?'”

Perros said Boyle County Judge-Executive Howard Hunt was the one who convinced the state to also try installing a left-turn signal at the intersection of Fourth and Main streets, where traffic often backs up for multiple light cycles as vehicles wait to turn left from Main onto Fourth.

“They were very hesitant to do so, but the judge insisted and they agreed to it, and I’m glad they’re honoring that commitment,” Perros said. “But I’m disappointed that they’re not honoring a verbal commitment they made that day. And that verbal commitment was to have an in-person conference, meeting — whatever you want to call it — to introduce their intentions. Instead, they chose to issue a press release, and I’m significantly disappointed in that.”

The state proposed a similar lane reduction years ago, but the plan was ultimately shelved after vehement local opposition.

Perros said he has asked for two things from the state the whole time the lane reduction has been on the table: Examples where lane reductions have been successfully implemented in other communities and data that proves how narrowing the number of lanes “is going to make it any safer.”

“I have not received anything along those lines,” he said. “So from my vantage point, instead of presenting this in a spirit of cooperation and commitment, we now have something less than that.”

Magistrate Cullen said lane reductions have in fact been implemented successfully in many Kentucky towns, including Richmond, Georgetown and nearby Harrodsburg.

“People will say that you’re going to get less traffic down Main Street, and I’m OK with that, because most people that won’t use it aren’t going to be shopping on Main Street anyway,” he said. “… Main Street should be a destination, not a through-way. We lose a lot of traffic, especially from those with kids, on Main Street because it’s dangerous and if a child gets out on the wrong side of a car on Main Street, it can have huge consequences.”

The lane reduction is supposed to begin on Aug. 1 and last for six weeks. It will result in one lane for traffic in each direction on Main Street, with a shared center lane for left turns. Four weeks into the trial, the state plans to hold a public input meeting. At the end of the six-week trial period, the state will review traffic flow data and decide whether to keep the new arrangement when it resurfaces Main Street later this year.

Danville Police Chief Tony Gray stated, “I think it will slow traffic down and it’s a great opportunity to look at a possible change.”

Boyle Judge-Executive Hunt said, like Perros, he is disappointed in poor communication from the state, but “I am in favor of the test and I am 100-percent supportive of however the public desires to move forward after the test.”

Hunt said he was the one who suggested to the state they conduct a test first, rather than just implementing the lane changes. He said he told District 7 official Kelly Baker if the state wants to complete the lane reduction successfully, “you’re going to have to get a whole lot of public buy-in, and the best way to generate that, if you’re going to generate it, is with a test.”

But the last communication Hunt had from the state was back in May when the meeting was held with Scott and others. He didn’t know the state was moving forward with the test until Scott told him yesterday.

“I’m a little bit sideways with not having received an email,” he said.

But Hunt hopes the test will be useful regardless.

“I am open to seeing that there could be positive benefits from the change,” he said. “And if there’s not, then we’ll resurface it the way it is right now.”

Will traffic ‘get the hell out?’

Perros said the state is interested in making Main Street safer, but he fears reducing lanes would actually increase traffic speed because it will cause more backups at lights.

“When they get the green at Fourth, they’ll want to get the hell out of there,” he said. “I think the outcome of this is going to be the exact opposite of what they’re trying to do, which is not surprising at all.”

Perros said he told a state official businesses in downtown Danville are nervous because they have to maintain a good flow of customers to stay open, but the state can’t tell them what the impact will be on their businesses. The state official told Perros he hadn’t considered that before.

“This is about the retail businesses slugging it out six days a week against Walmart and Amazon, and the state is worried about somebody getting hit every so often,” Perros said. “… You’ve got 40,000 cars that come through here every day. Somebody is going to get hit.”

Cullen said he believes the change will be a positive for downtown businesses because “a lot of places just want to see a safe little downtown.” Better pedestrian safety and slower traffic could even ultimately help Danville attract a downtown grocery store or hotel, he said.

“There’s a lot of opportunities there that are just kind of being missed because people are afraid the sky is falling,” he said.

Scott said there’s a complicating factor to the state’s test: The north side of Main Street west of Fourth Street is currently under construction, as the city completes a “streetscape” project, replacing the sidewalks and lights. That project won’t be done until at least mid-August.

But the state is under financial and time pressures to complete the test and proceed with resurfacing Main Street before the winter, when asphalt plants close, he added.

“The state, in my view, is trying to fulfill their obligation to provide traffic flow in a safe manner,” Scott said. “They’re not trying to do anything to Danville. They’re trying to seek to improve that. Whether (the lane reduction) accomplishes that goal remains to be seen.”