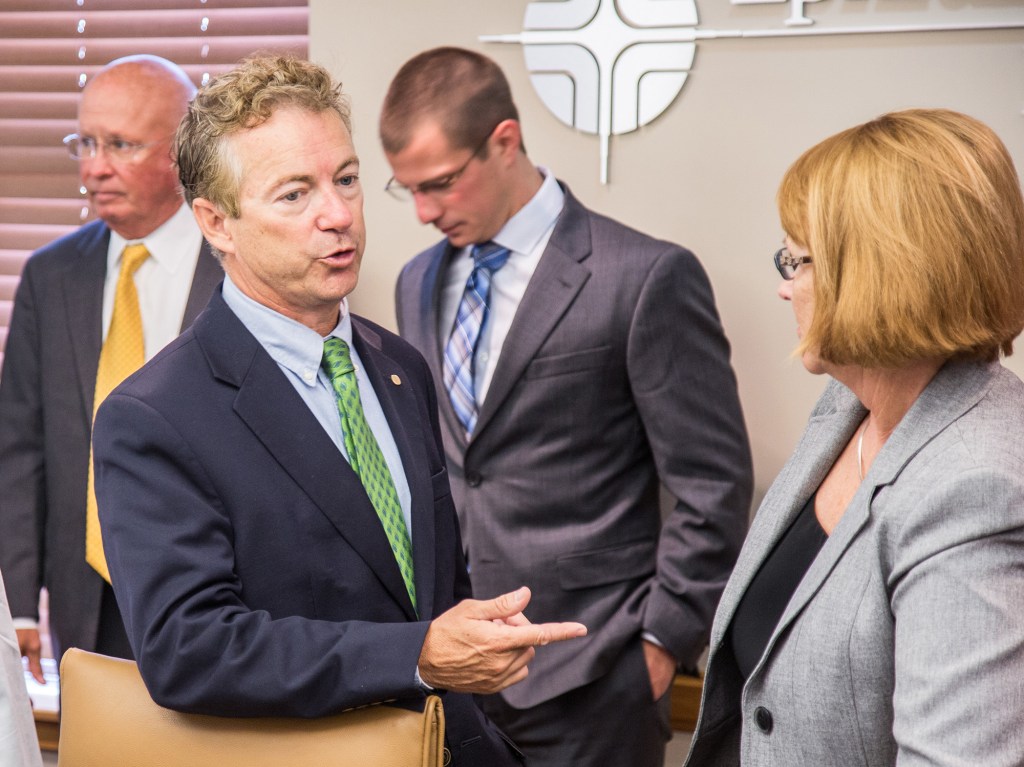 U.S. Sen. Rand Paul speaks with former Chamber of Commerce Director Paula Fowler during a visit to Danville in 2017 for a roundtable event on health care. (File photo by Ben Kleppinger)

The senator has a narrow window of time available; he is planning to fly into the Danville-Boyle County airport early on Aug. 21, a Wednesday, and hold a roundtable-style meeting with local officials and representatives of the business community, Jewel said.

“We’d like to invite as many people as we can, but that depends on the venue,” which hasn’t yet been selected, Jewel said.

In order to hold the event, the U.S. Capitol Police want a list of everyone who will attend provided a few days prior to the event “so they can all be cleared,” Jewel said.

“Sen. Paul’s staff — they really like to spread the net as wide as they can but still be a group that’s small enough to have kind of roundtable discussions so he can actually talk to people,” he said. “He wants it to be way less about him getting up and talking about policy and way more about answering questions from our business community and our chamber members.”

The Danville-Boyle County Economic Development Partnership is planning to reschedule its August meeting if Paul’s visit occurs so that its board members could attend.

Jewel said there’s no specific topic set for the potential event at this point; it’s planned to be a “pretty open Q&A.” More details will be released after they are finalized.

Paul, a Republican, has been Kentucky’s junior senator since 2011; he won re-election to a second term in 2016 by defeating Democratic challenger Jim Gray. Paul has been in the news most recently for blocking the U.S. Senate from approving an extension to the Sept. 11 Victim Compensation Fund, and for asking President Donald Trump for permission to sit down with leaders of Iran in an effort to reduce military tensions between the two countries.

Paul visited Danville almost two years ago, when he held a health care round table with local leaders in the medical and business communities at Ephraim McDowell Regional Medical Center.