Paintings capture the life of Second Street for the fifth-annual Soul of 2nd St. Festival 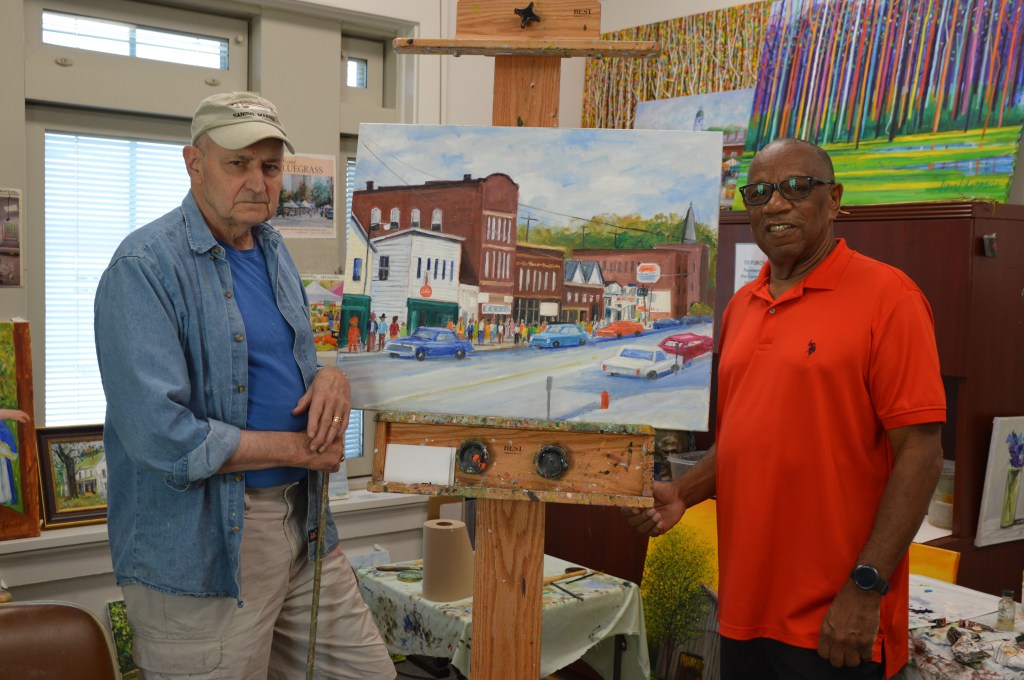 David Farmer, left, and Michael Hughes, right, collaborated to produce a series of paintings that recall the vibrancy of Second Street in its heyday as the African American Business District of Danville last year.

David Farmer has been an artist-in-residence at the Art Center of the Bluegrass (formerly the Community Arts Center) since it opened, and this summer, he’s dedicating some of his time in the studio to reviving the history of Second Street, the one-time African-American business district of Danville. 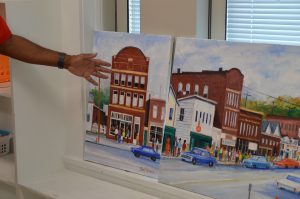 A recent run-in with Michael Hughes, president of the Danville-Boyle County African-American Historical Society, prompted a collaboration between the two men that began with a memory of the shape that community life once took in Danville.

In 1974, the buildings that were once the setting for the commercial and social life of the African-American community of Danville were razed on the tail-end of a national policy of “urban renewal.” But historic photographs exist that provide a glimpse of a Second Street that was alive with activity. When Hughes shared the black and white photographs with Farmer, the artist dove into action with a palette full of color.

“I jumped right on that because I like those structures, they’re old and everything, and that gave me a chance to do those, so I did three,” Farmer explains. At one time a draftsman, Farmer is comfortable with using structures as the focus for his work.

“This is what I do,” he says. “Old buildings. The older the better.”

The paintings will be displayed at the Soul of 2nd St. Festival that will celebrate its fifth year beginning this Friday, Aug. 9. Viewers might be surprised that the paintings, which are based off of black-and-white photos, are bursting with color.

A vibrancy radiates from the mass of figures that dots Farmer’s scenes of Second Street life. Questioned about his ability to bring life to a painting that was based upon a colorless photograph, Farmer explains, “I’ve done a lot of scenes with people in them … you put them in there where you think they fit. You try to give the colors vibrancy, like a quilt, you put one here and one there and this color bounces off of another one.”

When Hughes looks at the pieces that will be featured at the upcoming festival, he is able to point out specific buildings that Farmer has re-constructed in his artwork and recount stories relating to the businesses and people that occupied these very spaces. Reflecting on the memories that the oil painting brings to mind, he says: “I love the 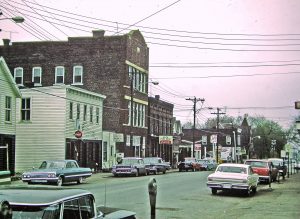 Photographs like this one, from 1966, helped David Farmer re-imagine Second Street in its heyday. (Photo contributed by Michael Hughes)

whole picture, but when you put the people in there … that’s the way it was.”

After their debut at the Soul of Second Street Festival, artist David Farmer plans to donate his paintings to a museum that will be sponsored by the  Danville Boyle County African-American Historical Society. While this museum is currently in the planning stages, Michael Hughes, president of the society, hopes that by festival time next year the society will have a building in which to share with the community and visitors to Danville the history of the African-American community in Danville.