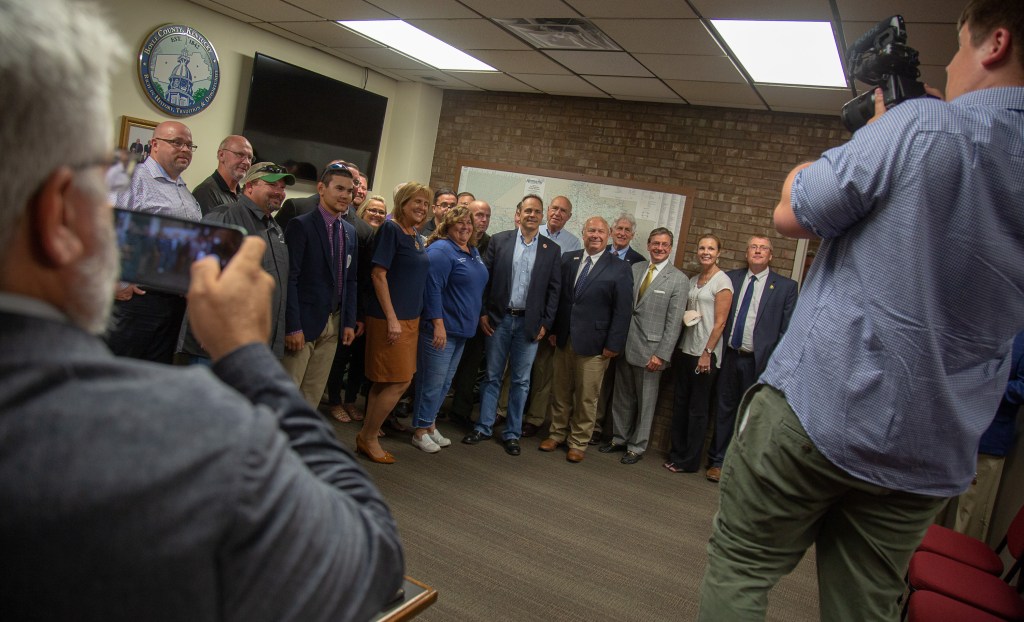 Kentucky Gov. Matt Bevin poses for a photo with elected officials and some supporters during a visit to Boyle County Friday afternoon. (Photo by Ben Kleppinger)

A friendly crowd of around 30 people gave Gov. Matt Bevin a standing ovation when he arrived in the Boyle County Fiscal Courtroom Friday afternoon.

Bevin, who is up for re-election in a little more than a month, was in town to personally announce $589,678 in “discretionary” road funding for eight resurfacing projects.

“These are dollars coming back to your community. They’re your own dollars,” Bevin told the crowd of mostly elected officials and members of the Boyle County Republican Party.

Bevin said his office has “latitude to disseminate” discretionary road dollars as it sees fit. 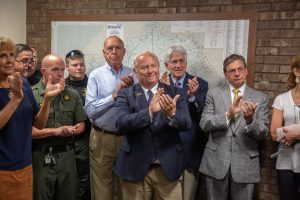 “They used to be handed out as political candy. That’s what this fund frankly was probably set up for,” he said. “It was meant to favor certain people, so if Judge(-Executive Howard) Hunt had been my guy, he had been a supporter, then, ‘Here’s a little something for ya; make sure things are coming around.’ And if you weren’t, then you never got anything. And there have been counties in this state that have been punished for decades, frankly, because they voted the wrong way.”

“We submitted a list and the state and District 7 (of the Transportation Cabinet) went and reviewed them and validated the need,” Hunt explained during Bevin’s visit.

“The funding allows for nearly 8.5 miles of pavement resurfacing work on seven county roads that are experiencing increased traffic volume, provide access to more than 80 homes and businesses, and serve as school bus routes,” according to a news release issued by the Transportation Cabinet Friday night. “… The Department of Rural and Municipal Aid is currently working to compile an agreement between the Cabinet and the County. The Boyle County Fiscal Court is responsible for administering the work, and KYTC will reimburse the county for the projects.”

During Friday’s event Bevin asked which member of the Boyle County Fiscal Court had been serving the longest; it is Magistrate Phil Sammons, who is in his sixth four-year term.

“In all seriousness, and not to patronize … have you ever seen an administration where the people actually came and talked to you about what your needs are?” Bevin asked Sammons, a Democrat.

“… There really has never been an administration that was a good steward of these dollars in the way that this one is,” Bevin said. “This is not political candy. It’s not. It shouldn’t be. And it historically has been.”

Campbell confirmed Bevin had not visited Boyle County when either of those prior allocations were made.

Bevin told those in attendance they should expect whoever is governor after November’s election to continue making the effort to visit, provide assistance when appropriate and listen to concerns.

“Continue to demand that level of government from people. Hold people to account … at the judge level, at the magistrate level, the state level. Really and truly,” he said.

After the funding announcement, Bevin asked people to share anything they thought was important with him.

“Do you have any campaign signs?” one member of the audience asked. Bevin said he did not. 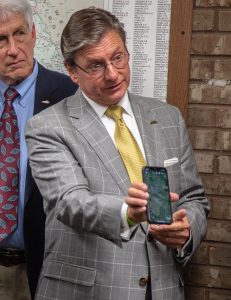 Danville Mayor Mike Perros holds up an image of the land around the Danville-Boyle County Airport for Gov. Matt Bevin to see. (Photo by Ben Kleppinger)

Danville Mayor Mike Perros told Bevin there is strong local interest in expanding the Danville-Boyle County Airport and adding a longer runway to accommodate larger planes. “We’ve got something here that nobody else has,” he said.

Bevin said he is an advocate for investing in Kentucky’s airfields, but he noted “there’s 50 different airports in the state.”

“I’m not saying I’m not for it, but I want to manage expectations,” he said. “The odds that there’s going to be a 12,000-foot runway here is really not high and if people lead you to believe that, then that’s not appropriate. … Is it a possibility? Sure.”

Boyle County Jailer Brian Wofford told Bevin the local jail “has outlived its lifespan” and county officials are meeting with state officials about the potential for using some land at the state prison Northpoint as a site for a new county jail. 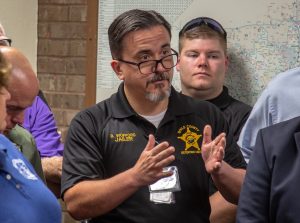 “In two weeks, we’ll be selecting an architect, but we still haven’t been able to nail down a location. Is there anything your office could do to help us with that?”

Bevin said he understands the problem, but noted there are other jails in far worse state than Boyle County, some of which will “literally probably have to be shut down for a variety of reasons.”

Bevin said it’s frustrating that the state seems “stuck in a rut” when it comes to jailing people, and it’s costing 5-6% of the state budget to each year to keep doing it. He said jails are generally unable to truly help the high percentages of their populations who have mental illnesses and/or suffer from drug addiction. 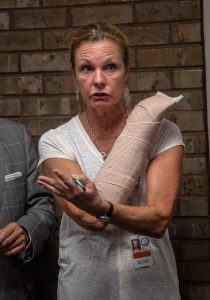 Boyle County Treasurer Mary Conley talks about the funding Boyle is missing out on because it doesn’t have a drug court. (Photo by Ben Kleppinger)

Boyle County Treasurer Mary Conley said because Boyle County is one of only a few counties in the state that doesn’t have a drug court, it’s ineligible for “a lot of money available at the federal level” through grants for rehabilitation and facilities to help improve recovery options.

“We would like to be able to get our hands on some of that drug court money and it’s off the table for us,” she said.

Bevin questioned why Boyle County doesn’t have a drug court; Conley and Hunt explained Circuit Court Judge Darren Peckler has his own “termed drug court” that doesn’t meet the requirements to qualify as an official drug court by federal standards.

“Do they not understand the opportunity lost by not making it fit the criteria?” Bevin asked. “Here’s what I would encourage you to do: Find out. Ask them — it’s possible they don’t realize that some slight modification would make it possible to draw down these dollars.” 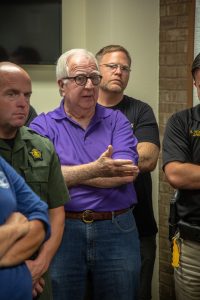 “I’ll just cut to it — our judicial system … really hasn’t come to the table,” Caywood said. “We had a consultant here; they did not participate. Part of it I think is an attitude. I don’t want to be in front of them after what I’ve said … but you want the truth, that’s the truth.”

“And I had gathered about as much just from how everybody looked at each other (when the topic came up),” Bevin said.

Bevin said Kentucky needs higher “caliber” of people running for and getting elected to judicial seats.

“Our state has suffered for the fact that many of the people in these courts — may not be these courts — are not as qualified as they should be,” he said. “… At the end of the day, we’re the ones in charge. We get to decide. We pick. If somebody’s really that — turn them out. Get somebody new. The problem is getting somebody good enough to be willing to run.”

“The term is six years, I believe, so it takes a while,” Caywood said.

“Again, I feel your pain,” Bevin said. “I’ve still got people that I inherited, that were put in for political reasons not competency reasons.”

Read about Boyle County Magistrate Jason Cullen’s comments to Gov. Bevin about the Kentucky School for the Deaf here.