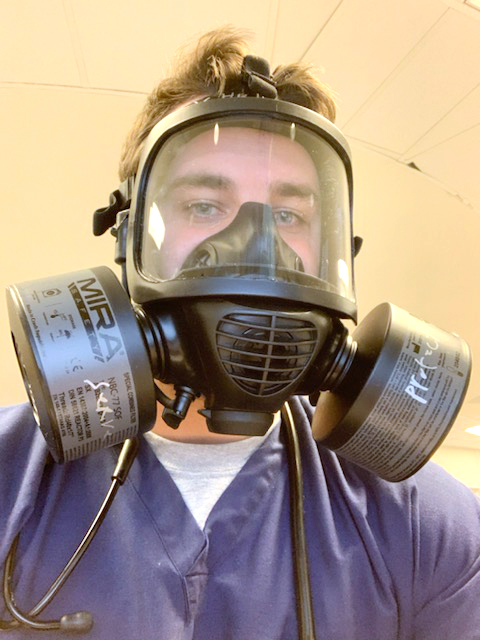 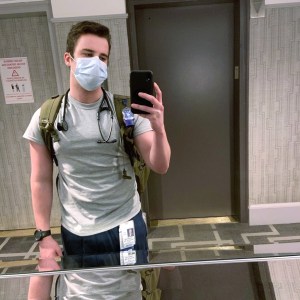 Today I want to share the story of Christian “CJ” Schulte, one of the heroes today fighting COVID-19 to help us all have a chance to one day return to normalcy.
Schulte, 25, grew up on a horse farm in southern Ohio. He worked in retailing but didn’t want to be a “desk jockey.” He thought about being a doctor — his mother, Dr. Heather Schulte is an emergency medicine physician at Ephraim McDowell Regional Medical Center in Danville — but didn’t want to be in school for eight years or more.
“I ended up choosing nursing and fell in love with it.  I worked in an intensive care unit in (Danville) Kentucky for a little over a year, and then moved back to Ohio to start a job in a level one trauma emergency department in Cincinnati,” Schulte said.
However, he recently gave up that new job to head to New York City where the COVID-19 outbreak has taken a huge toll on residents and medical personnel.
“I knew that New York City had been very hard hit, and the trend looked like it was going to be similar to that of Italy, which has suffered greatly.  That being said, I didn’t think much of it until I was watching the news and saw Gov. Cuomo’s plea for help from any medical personal,” Schulte said.
The emergency room in Cincinnati where he was working had a low traffic volume since so many people were staying home because of the virus.
“Given that I have over a year of critical care experience managing ventilators, I looked into how I could help.  I found a company called Krucial Staffing through a friend from Kentucky who was already in New York City helping.  I quit my job in the ER and flew out 48 hours later,” he said.
What courage that had to take but I also wondered how his mother, who certainly understood the danger of COVID-19, felt about his desire to help but also put his life at risk?
“Knowing the kind of person I am, she wasn’t very surprised. Me and her have done medical missions to remote countries in southern Africa before, so traveling for medical work was nothing new,” he said. “She told me she was a little scared for me, but mainly proud.  I have her and my father to thank for raising me so well.
“I would be lying if I said I wasn’t scared, but I thought that this would maybe be an event thats magnitude would grow into a huge disaster, and that I had the perfect skill set to make a difference where people truly need it the most. This is a once in a lifetime chance to help such a large number of fellow Americans. I was more scared of the possibility of someone dying who wouldn’t have if I was there.”
Again, that is the attitude of a true hero/patriot. Schulte put helping others above his own personal safety because he felt that was the right thing to do.
“If I can make a difference in just one person’s life, whether that be a patient or a tired New York City nurse or doctor, than that will be enough for me. I am a firm believer that I can’t change the world, but I can change someone’s world, one person at a time,” he said.
That makes the daily “hardships” most of us believe we have faced because of COVID-19 pale in comparison and really seem pretty insignificant. Maybe we should all pay extra attention to advice from Schulte.
“Take this seriously and please self isolate. New York City is a ghost town right now, almost no cars or people,” Schulte said. “I can only describe it as looking apocalyptic, like something out of a zombie movie. The kind people of New York City are the prime example of what it means to self isolate, follow their lead.
“Lastly, cherish your loved ones. Someone I know personally is already on a ventilator and in critical condition. It does not just effect old people. There are people of all ages on ventilators and dying.”