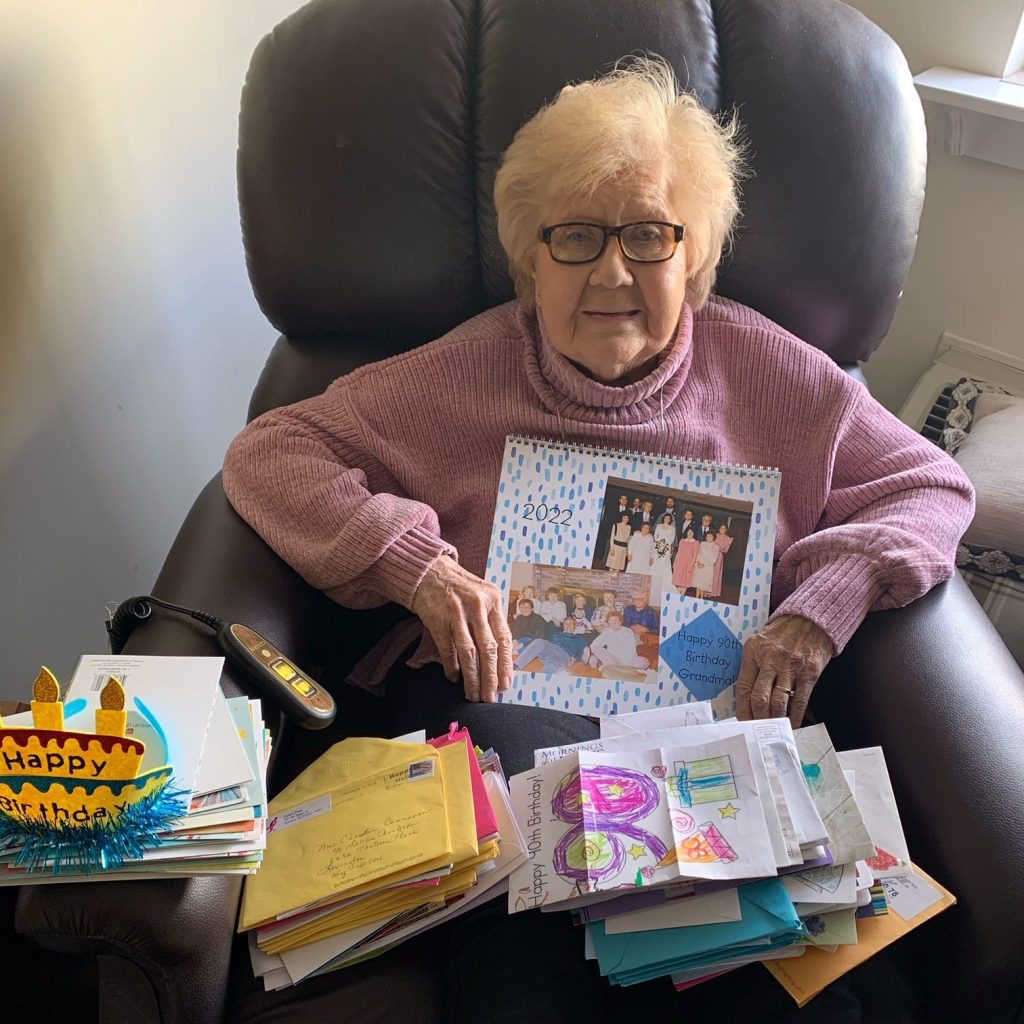 Chareleen Cannavan, a resident of Danville, received more than 150 birthday cards for her 90th birthday.

Chareleen Cannavan, a resident of Danville, recently celebrated her 90th birthday on Jan. 20. But with Covid-19 cases in a major surge, her family wanted to be safe, but still make it special.

Cannavan’s nephew Keith Steer and his three siblings came up with the idea to try to get her at least 90 birthday cards. In lieu of a mass gathering to celebrate, Cannavan’s nephews and niece reached out to other members of the family and friends and asked them to send cards.

Far surpassing the goal of 90, Steer said she has received over 150 birthday cards, and is still in the process of opening and reading them.

“She was amazed; at first she just thought she was getting a lot of cards because they came from people she expected to get cards from, then they kept coming,” Steer explained. “She’s been very grateful and touched by all of the attention she’s gotten.”

The cards came from over 40 members of her family, from great nieces and nephews to distant cousins. Her family asked co-workers and friends to send cards, too.

Only a few people sent two cards; most of the 150 came from all different people. Even some friends and fellow church members in Cannavan’s hometown of Petersburg, Indiana sent her cards.

Before retiring, Cannavan had a career in nursing. She lived in several towns in southwest Indiana before moving to Burgin, Kentucky, and now Danville.

With no kids of her own, Cannavan married a man when his two kids were teenagers, and now she has step-grandchildren. She was also very involved in the lives of her brother’s kids.

“My siblings and I, she’s literally been a supporter of us and encouraged us from the first day we were alive,” Steer said. “With our parents gone, we just really appreciate all those decades of encouragement. She was always very generous to include us, take us on trips with her; whatever activities we were involved in, she was supportive.”

Steer is retired and currently lives in Louisville along with one of his brothers. A great-nephew and great-niece of Cannavan live in Harrodsburg.

“We’re a very family-oriented group, we like to get together for special occasions,” Steer said. “We haven’t all lived close by all our lives, but now that she’s [in Danville] we make sure birthdays and special days are celebrated.”

The family hopes to celebrate her birthday in-person soon. Until then, she may continue getting more cards.