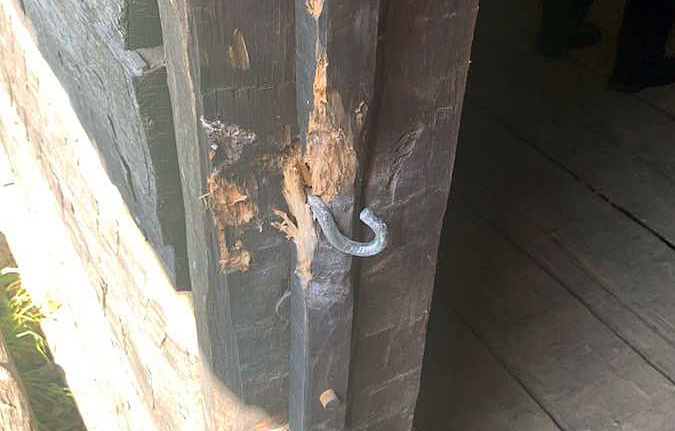 A cabin at Logan's Fort was damaged when vandals broke into the historic site. Photo submitted

Stanford Mayor Dalton Miller is personally offering a reward for information that leads to the arrest and conviction of whoever is responsible for recent vandalism at some of the town’s historic sites and businesses.

Miller said he is offering a $250 reward for information leading to the arrest and conviction of the person, or persons, responsible for the vandalism across the city.

There have been several incidents of vandalism over the last three weeks, Miller said.

“We had some inappropriate pictures drawn on businesses on Main Street,” he said. “That was the first incident. The city went down and cleaned those up before anyone would notice them.”

The pictures were painted on the windows, he said. The next incident occurred at the historic Logan’s Fort site.

“Then we had an incident at the cabins at the fort. They beat one of the doors open.” he said. “Then they tried to damage stuff at the L&N Depot.”

Miller said the vandals dragged the heavy historical items outside of the L&N Depot down the sidewalk, leaving a long stripe across the sidewalk.

“Then, the latest, they started using a paint pen and started writing on lamp posts downtown,” he said.

Miller is offering $250 of his own money to find out who is vandalizing property and put a stop to it.

Some tips have come in so far, he said.

“It’s probably juveniles,” he said. “I just want people to understand any time vandalism occurs it costs taxpayer dollars to correct. I don’t care if it’s an adult or a child; but if it’s a child, parents need to know where their teenage kids are and what they’re doing.”

If it’s an adult, Miller said he wants to see them caught and sentenced to community service to the city.

Anyone with information can contact the Stanford Police Department.