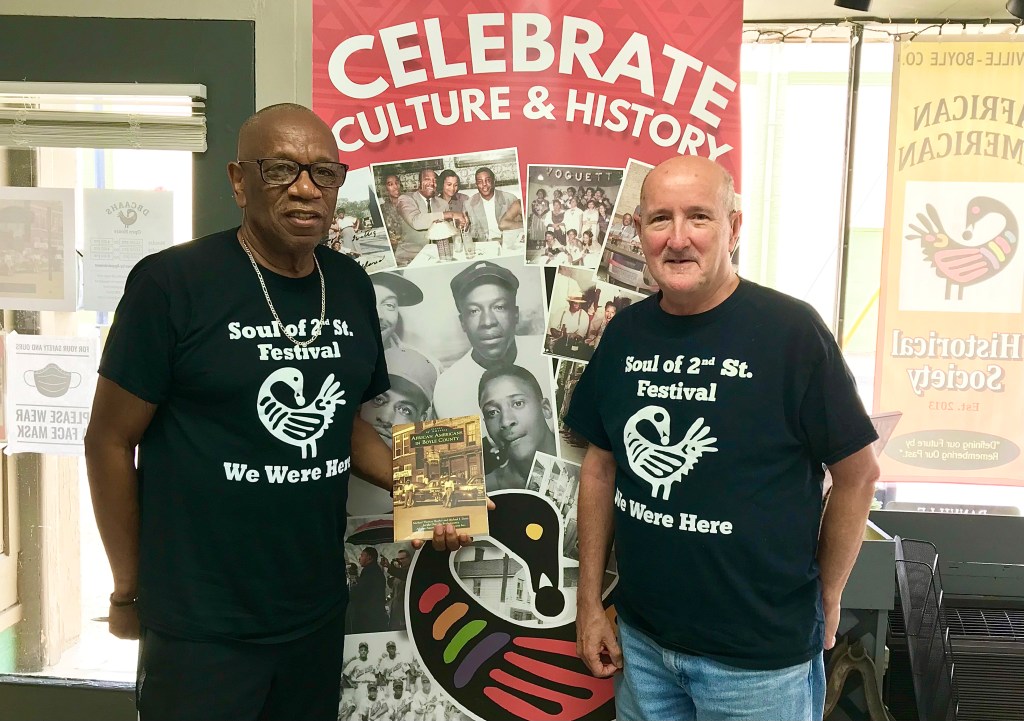 Michael Hughes (left) and Mike Denis (right) stand in front of the banner for the Soul of Second Street. The two recently co-authored a book, “African Americans in Boyle County,” which features historical photos of the African American community, including Second Street. It will be sold at the festival. Photo by Fiona Morgan

Michael Hughes and Mike Denis, members of the Danville Boyle County African American Historical Society (DBCAAHS), have had a busy year between releasing a new book and planning for the Soul of Second Street.

The sixth annual Soul of Second Street Festival is happening Saturday at Constitution Square Park from 3 p.m. to 10 p.m. It will be preceded by the History Conference on Friday.

Returning after two years of being canceled due to Covid-19, the festival is a celebration of African American history in Boyle County. Specifically it remembers the old black business district that used to be located at the current Constitution Square site, which was torn down for the purposes of integration in the 1970s. Much of the African American community was centered around those businesses on Second Street.

“It’s about Second Street in particular but the entire black community as a whole; and it’s about getting that soul aspect, the connection,” Denis said. “It’s almost like a family reunion of people who aren’t related.”

Hughes said some people travel to Danville for the festival to see old friends and share memories about days gone by.

“It’s all about people coming together to celebrate friendships,” Hughes said. “One of the big things that happened is two ladies who hadn’t seen each other for 50 years, since high school, reunited at the first festival we had, and that was so special.”

The festival will have musical acts by local bands and Gospel groups. Several confirmed acts include Robby Houston, The Carey Band, Renita Gray, Jessica Browning, The Southern Sons of Memphis, The Greens from Harrodsburg; and Hughes will be DJ-ing as Michaelfly. More acts will be added by the festival time.

The festival will also have merchandise vendors, all types of food vendors including ice cream, hot dogs, hamburgers, etc., and a family tent with kids’ games and events. The DBCAAHS will be selling t-shirts, and a newly-released book by Hughes and Denis called “African Americans in Boyle County.”

The book features hundreds of historical photos of people in the African American community in Boyle County, and of schools, churches, businesses, including the ones on Second Street. Most photos are from the mid-1900s.

Hughes and Denis spent months gathering the photos, doing research about them and writing captions for the book. They said the book has been selling very well. Click here to read more about the book.

A celebration of communities, the display will have 10 posters that highlight the people, schools, churches, cemeteries, and the 16 African American settlements in Boyle County. 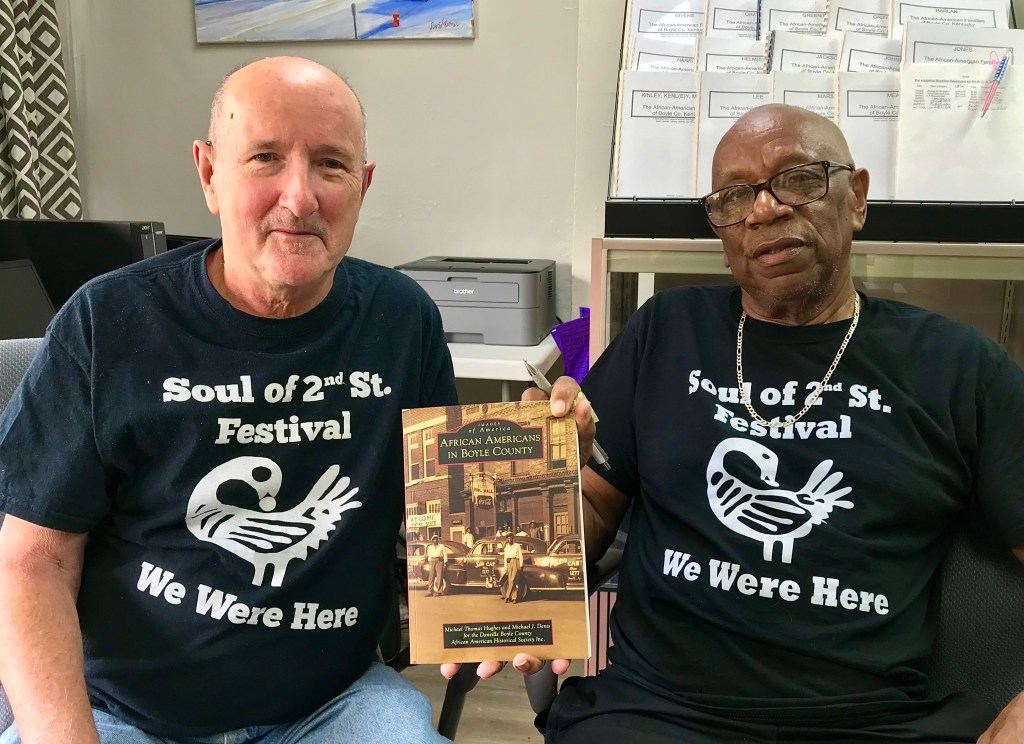 Mike Denis (left) and Michael Hughes (right) hold their newly-released book, “African Americans in Boyle County.” The book features hundreds of historical photos of the African American community, and will be for sale at the Soul of Second Street. Photo by Fiona Morgan

People will be able to scan QR codes that link to different oral history recordings that Centre College has done. Denis said unfortunately, the conference will not have speakers or other events this year.

He said they have had to scale back the festival and conference due to Covid-19 issues. He talked about how the pandemic affected businesses, and even local African American residents died from Covid.

“I think Covid impacted the black community much more severely than the white community,” Denis said.

Even though they won’t have as many events or acts as in years past, they want to keep the festival going.

Some photos from the display and from Hughes and Denis’ book will also be shown at the ‘We Were Here’ exhibit at Centre College’s Norton Center.

The exhibit will be in the foyer of the Norton Center starting in September, and will be up the entire school year. The exhibit will have over 100 photos of the African American community, different artifacts, and a timeline that details how urban renewal affected the community. Some photos will be from Hughes and Denis’ book, but it will also feature some that did not make it into the book.

“The book has quality photos,” Denis said. “But the grainier photos that the publisher wouldn’t accept work for the exhibit.”

The same recorded interviews of oral history at the History Conference will also be in the Norton Center exhibit. People will be able to pick up an old fashioned phone hooked up to an mp3 player, and can dial whoever they want to listen to.

Denis said the exhibit will be great exposure for the DBCAAHS, and he wants to let people know that the African American community is still here and strong.