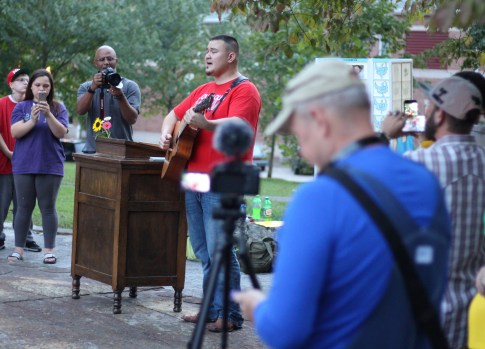 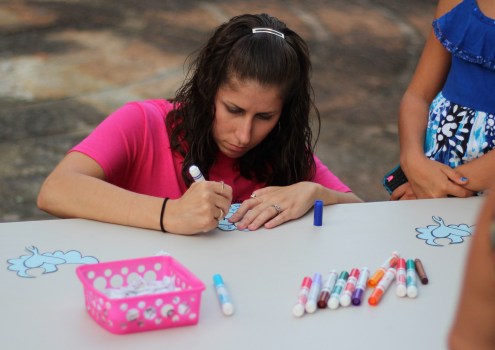 Whitney Stratton of Danville writes on a bird cut-out at the vigil Wednesday night. Stratton wrote the name of a close friend, Adam Hendrix. 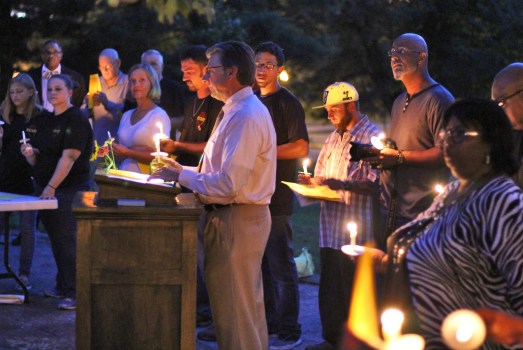 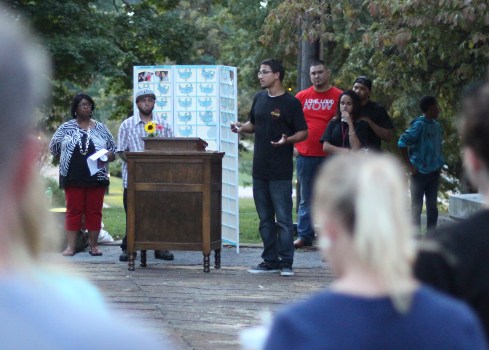 Robb Rodriguez, center in black, speaks about addiction during the vigil Wednesday. 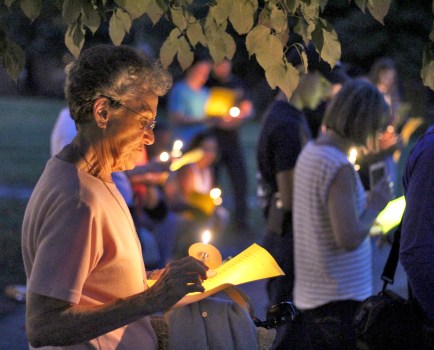 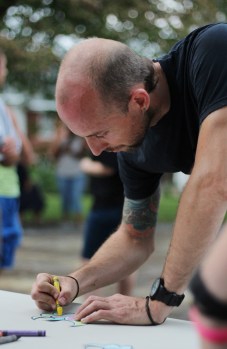 Phillip Farmer of Perryville decorates a bird for the overdose awareness screen. 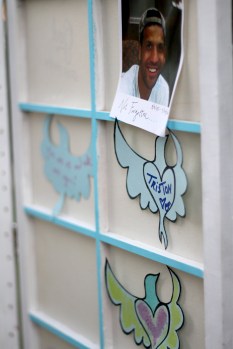 A photo and birds decorate the blue bird screen at the vigil Wednesday night. 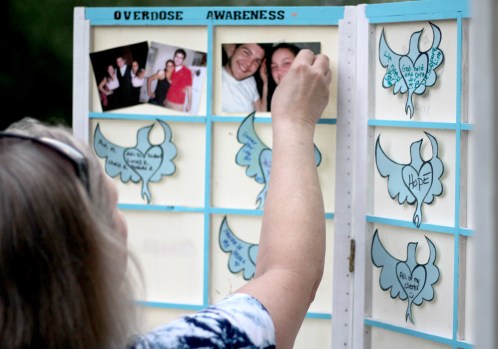 A vigil attendee places a photo on the overdose awareness blue bird screen. 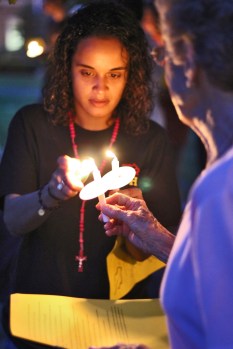 Since 2009, Robb Rodriguez has seen six friends die because of drug problems. He also battles his own drug addiction, which has led him to some dark places.
“I’ve lost everything that you can lose,” Rodriguez said Wednesday night at a candlelight vigil intended to raise awareness in the community about drug addiction and overdose deaths.
Rodriguez was a featured speaker at the vigil and one of close to 100 who gathered at the labyrinth outside Danville’s Presbyterian Church on Main Street.
Rodriguez’s sister, Toni Ward, helped organize the event through her addiction-support group Families Into Getting Help Together (FIGHT).
“We are all tired of opening the newspaper and seeing that someone else has died,” Ward told the crowd Wednesday.
Ward said she feels blessed that the efforts of FIGHT and the Boyle County Agency for Substance Abuse Policy (ASAP) are gathering so much community support and momentum.
“I never imagined it would get to this point. I was just sick and tired and I didn’t know what I was going to do,” she said of forming FIGHT. “To see people dying and feeling so hopeless and alone — this right here shows that they’re not alone and they don’t have to feel hopeless anymore.”
The night included testimony from several recovering addicts and attendees were able to add their own touches to a “blue bird” screen, which will be on display at the Boyle County Public Library in September and then possibly other locations around the area.
People added names of loved ones affected by drugs, prayers and other thoughts to cut-outs of birds and placed them on the screen.
Musician Maasak Tagarook performed “Tears From Heaven” for those gathered. Tagarook said he doesn’t like that some people “are towering over” people who struggle with addiction, looking down on them and their families. Instead, people need to “come together in love,” he said.
Pastor James Hunn led the evening service, providing an invocation and convocation.
“I truly believe that as we come together and walk in unity and love, that we can solve this problem of overdoses,” Hunn said.
The event was held Aug. 31, which is International Overdose Awareness Day.
Ward said she thinks real change is possible now that so many are paying attention.
“This is something that is never going to stop for me because it has become such a big part of my life. And I will not stop until we have found help for addicts and their families,” she said. “If we stick together, I feel like this is something that can change Boyle County and all the surrounding counties.”