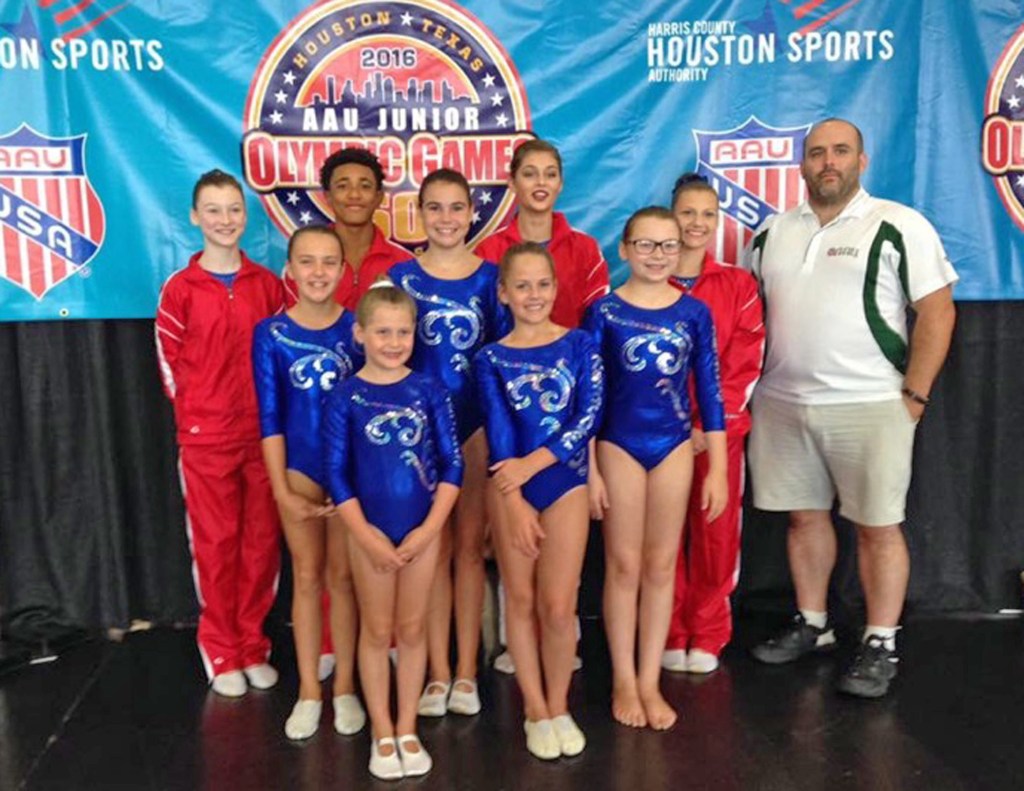 Photo Submitted Marquise Kinley and Graci Williams with their team at the 2016 AAU Junior Olympics.

Two local gymnasts made a big showing this summer at the 2016 AAU Junior Olympics in Texas.

Marquise Kinley and Gracie Williams are with the Air-Bound Athletics power tumbling team, based in Somerset, under coach Steve Landon, former olympic gymnast. Marquise has been at the gym for about three years; Graci just made the shift last year

Each level the gymnasts move up is based on the skills they have mastered, she explained. The categories are broken down by skill level: sub beginner, beginner, advanced beginner, sub novice, novice, intermediate, sub advanced, advanced, sub-elite and elite; by age; and by gender.

Marquise is also on the AAU Junior Olympic team, which requires him to show with his team and compete at certain events.

Kendra Peek kendra.peek@amnews.com
Graci Williams shows off her awards and medals from the 2016 AAU Junior Olympics.

“I’d be walking through Walmart and she’d say, ‘Watch mom!’ She literally would flip down the aisles of Walmart,” said Jessica Williams.

She has since won over 100 medals, more than 50 trophies and has four state champions under her belt.

“I don’t think a lot of kids know how hard it is,” she said. “You can see the kids with a passion for it — you can see it on their faces.”

She got a high point award for Kentucky on mini-trampoline, too.

“I was so excited,” Graci said. “I started going crazy. It’s hard to get first at regular meets, but at Junior Olympics, that’s really hard to do. I was happy.”

Besides her work in the arena, the fifth-grade Woodlawn Elementary School student worked hard to maintain her grades and a perfect attendance record, impressing teachers over the years.

“We love Woodlawn, they are exceptional. They know kids,” said Jessica. Teachers have made a point of coming watch the young lady in local competitions, she said, and they always seem to enjoy it. The school officials have also gone out of their way to show support, announcing her wins over the sound system with morning announcements, and throwing her a party on the first day.

It can be an expensive sport, with purchasing new leotards every few years, plus travel and other fees. Glen and Jessica help, but encourage the young girl to do the bulk of the fundraising, which she does. That money is devoted to her tumbling.

“We’ve always told her, ‘No matter what, no matter where, we support you. You do it for you and we’ll do everything to help you go as far as you want,’” she said.

Graci has inspired her little brother, Gavin, 5, a kindergartner, who is now also trying tumbling.

Besides tumbling, Graci competes in swimming, a traveling softball team and takes dance at Woodlawn.

Photo Submitted
Marquise Kinley shows off his medals and awards from the 2016 AAU Junior Olympics.

Marquise officially started when 8 years old, but Tina said he’s been “flipping off furniture since he was two.”

He said he was a little “disappointed” this year, as he received three gold medals last year, but he did advance to a higher level of competition this year.

Last year, when he competed, trampoline was his favorite competition, but with the advanced class has come advanced skills, and now Marquise said he likes the floor, but the double-mini is his favorite.

To do the double-mini, Marquise said, you have two tries. In the advanced, the first try requires five skills, the second requires skills.

He’s not sure why he enjoys the sport so much.

“I don’t know, maybe because I’m physically able to do it. Not a lot of people have that gift, or can move their body in the air like that,” he said.

Marquise’s participation in the AAU Junior Olympics team has kept him busy with traveling to competitions.

Besides tumbling, Marquise is a freshman, playing football for the Boyle County High School and plans to run track in the spring. He did that last year and really enjoyed it — maybe even more than his first love, tumbling.

“I think we have a new love,” said Tina Kinley. “He enjoyed Boyle County Track and Field last year.”

The guys on the football team have been intrigued by his skills — “the first day I got there, they were like, ‘Can you do a flip in pads?’ I didn’t,” he said.

For anyone who is considering getting into tumbling, Marquise quoted his mom, “‘Don’t be afraid to fly.’”

It’s not easy, they said.

“It takes a lot of work, a lot of training,” Tina Kinley said.

“I’m proud of him no matter what he chooses,” Tina Kinley said.