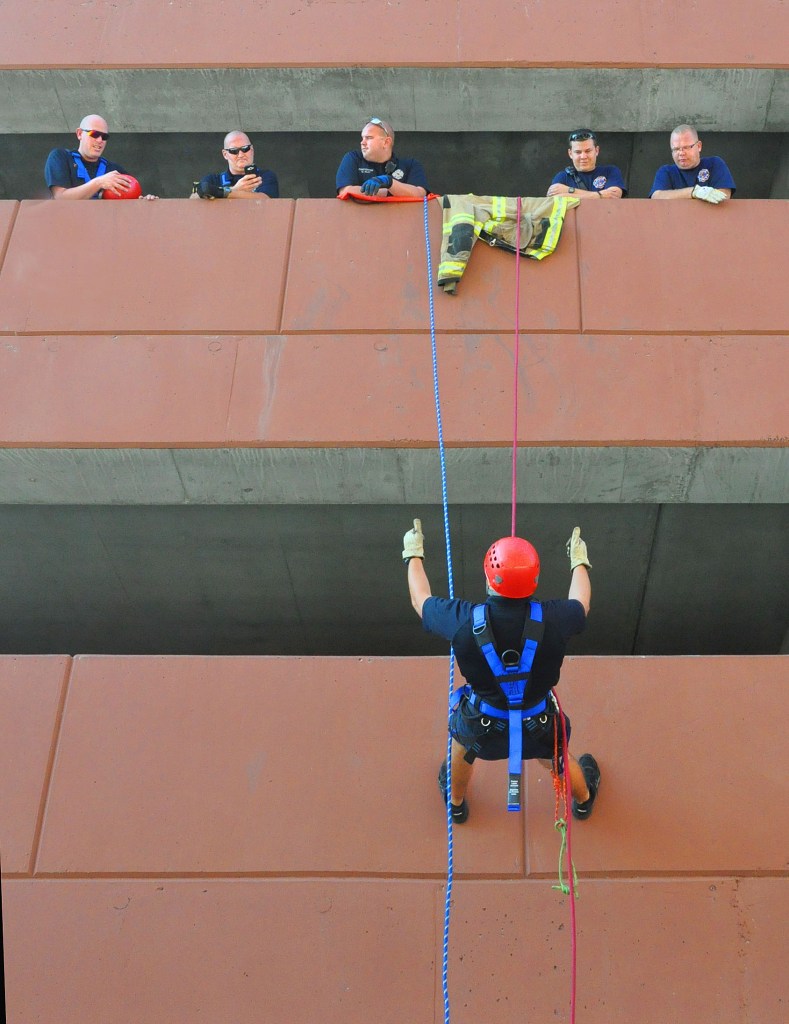 Photo by Robin Hart/robin.hart@amnews.com Danville firefighter Will Ellis gives a thumbs up to other firefighters while repelling down the back wall of the Danville municipal parking garage Tuesday morning. The fighters waiting their turn to do the exercise are, from left, Donald Carpenter, Jerry Domidion, Michael Riley, Justin McBride and Jeff Shields Shields, the instructor for the exercise, said they had all repelled before and were just refreshing their skills.

The Danville Fire Department was recently presented with a Life Safety Achievement Award for its fire prevention accomplishments in 2015 by the National Association of State Fire Marshals Fire Research and Education Foundation in partnership with Grinnell Mutual Reinsurance Company. The award was announced by H. Butch Browning, president of the NASFM Fire Research and Education Foundation.

“When we hear the fire truck coming down the street and see its lights, we know firefighters are responding to someone in trouble. What we don’t know is that these unsung heroes are doing a lot of things behind the scenes that save lives,” said David Miller, assistant vice presidents of Special Investigations at Grinnell Mutual. “The Life Safety Achievement Award recognizes fire departments for their fire prevention programs that have been proven to save lives year after year.”

Since 1994, the Life Safety Achievement Award has recognized local fire prevention efforts that have contributed to reducing the number of lives lost in residential fires.

The Danville Fire Department is one of 160 fire departments across the United States to receive the award this year for recording zero fire deaths in 2015 or reducing fire deaths by at least 10 percent during the year. In addition, award recipients documented active and effective fire prevention programs as well as a clear commitment to reducing the numbers of house fires in the community.

“Experience tells us that fire prevention activity and public education can significantly reduce life and property loss from residential fires.” Browning said. “Prevention and education are very cost effective compared to the traditional approach of relying on fire suppression. The Life Safety Achievement Award recognizes fire departments for their fire prevention efforts and encourages them to continually improve upon those efforts.”